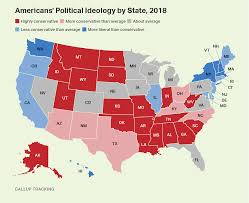 The number of states where liberals outnumber conservatives has dropped more than 30 percent, with just six now in that category: Massachusetts, Hawaii, Vermont, Washington, New York, and New Hampshire.

Nationally, those who identify themselves conservative hold a nine-point lead.

Before conservatives start to cheer, Gallup said the gap used to be 21 points and a handful of the state numbers fall in the margin of error.

But the survey still shows a large swath of red and pink states bookended by the whole West Coast, New England, and the mid-Atlantic, including the Washington, D.C. area.

To read more click here.
See also  New CBS Poll Is 'Damning Indictment of Biden' While Official Offers up a Feeble Response
→ What are your thoughts? ←
Scroll down to leave a comment: