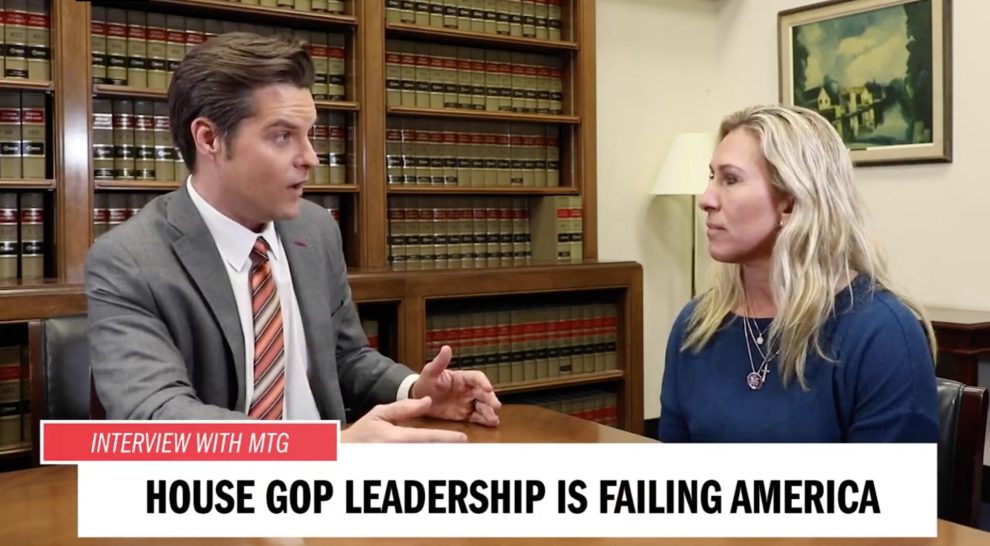 Rep. Matt Gaetz (R-FL) said Monday he supports bringing Republican House business to a halt until as late as March next year if it means electing someone besides House GOP Leader Kevin McCarthy (R-CA) to be speaker.

Gaetz, one of five outspoken opponents of McCarthy, told Charlie Kirk in an interview he would rather wait weeks and have “sort of a turbulent takeoff” than have McCarthy be speaker.

“I’m saying we could see the cherry blossoms bloom and not have a speaker. I hope it doesn’t come to that,” Gaetz said, in reference to the popular flower in D.C. that blooms annually around the end of March.

Rep. Marjorie Taylor Greene (R-GA), a vocal proponent of McCarthy’s bid for speaker, conveyed her disapproval of Gaetz’s remarks in a statement online, emphasizing a slate of investigations Republicans plan to begin at the start of next year and noting Americans would not “wait for the cherry blossoms to bloom.”

The Dems want the corrupt DOJ to prosecute Trump, the special counsel is weaponized, the FBI colluded w/ Twitter to silence Americans & Hunter’s laptop, the border is over run, and McCarthy is ready to take on these issues.
The country won’t wait for the cherry blossoms to bloom. https://t.co/VhmCIbUE25

Republicans overwhelmingly nominated McCarthy to be speaker in November, but the full House must vote on McCarthy’s nomination as its first order of business when it convenes January 3. Republicans will have an ultra-slim majority, meaning McCarthy can only afford a few defectors before his speakership prospects are jeopardized.

Gaetz, along with Reps. Andy Biggs (R-AZ), Bob Good (R-VA), Matt Rosendale (R-MT), and Ralph Norman (R-NC), have openly opposed voting for McCarthy as speaker but have not proposed a surefire plan for an alternative candidate who could receive the necessary majority of votes. Gaetz in the interview suggested Rep. Jim Jordan (R-OH), but Jordan is openly advocating for McCarthy to become speaker and laser-focused on chairing the House Judiciary Committee next year.

Should McCarthy not achieve a majority of votes on January 3, a number of scenarios could play out, including a doomsday scenario in which Democrats and a handful of Republicans unite to elect a centrist speaker who could weaken Republicans’ investigative pursuits. In another scenario, multiple ballots could occur before a speaker is elected, which Republicans have warned could significantly stall their work, including their ability to hold hearings, issue subpoenas, and more.

If the chaos Gaetz is now publicly projecting comes to pass — a real possibility if McCarthy does not win — the House would be completely incapacitated, possibly for weeks or months.

Until the chamber elects a speaker, it cannot do any other business, so the House could be, under Gaetz’s vision, entirely held up for weeks conducting election after election for speaker. Republicans would not be able to use their new majority during that time to do anything, including pass any legislation or conduct any investigations. The fact Gaetz is openly promoting such chaos, too, is unlikely to win more allies to the rebellion he aims to champion — and may even turn some members against this strategy who were possibly open to backing it otherwise beforehand.

Former President Donald Trump told Breitbart News’s Matthew Boyle in an interview Friday that he supports McCarthy for speaker and that those opposing McCarthy were playing a “dangerous game” that could result in a “worse situation.”

Confronted by Kirk about disagreeing with Trump, Gaetz said, “Look, I love President Trump. I’m gonna vote for him in 2024. I’m gonna campaign hard for him. But HR was not always his best thing.”

Rep. Lauren Boebert (R-CO), who has not committed to voting for McCarthy, spoke alongside Gaetz during Kirk’s interview Monday and said her nonnegotiable requirement before she would consider supporting McCarthy would be that he permit a “vacate the chair” motion, a rule McCarthy could grant that would allow Republicans to vote to oust a speaker mid-Congress.

Asked by Breitbart News on Sunday if Boebert, another fervent Trump supporter, disagreed with Trump about McCarthy, Boebert said, “I’m a proud support of President Trump. I have not committed my vote on January 3rd one way or another.”

See also  MIDDLE EAST EARTHQUAKE: 'An Emergency Within an Emergency'

Greene, in response, hammered Boebert, noting that both she and McCarthy, two fundraising giants, had donated to Boebert’s reelection campaign in the midterms. Boebert ultimately just narrowly dodged what would have been a colossal upset and defeated her Democrat opponent by about 0.2 percent of the vote.

Greene added, “Lauren refuses to endorse President Trump, she refuses to support Kevin McCarthy, and she childishly threw me under the bus for a cheap sound bite.”

She gladly takes our $$$ but when she’s been asked:

Lauren refuses to endorse President Trump, she refuses to support Kevin McCarthy, and she childishly threw me under the bus for a cheap sound bite.

Boebert responded to Greene’s comments through the Daily Caller, shooting back at Greene and reiterating her support for Trump.