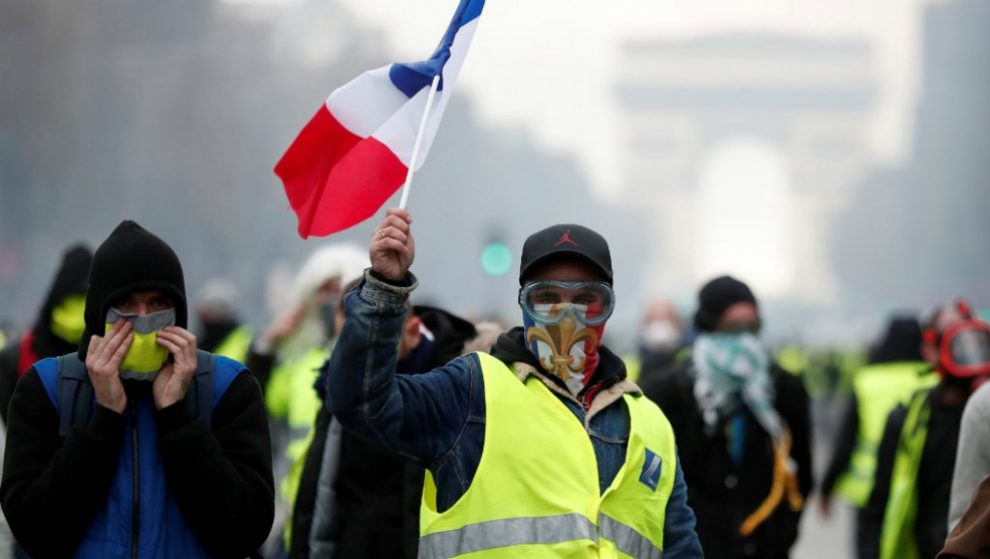 Protest organizers had hoped to make a splash Saturday, which marks the 4-month anniversary of yellow vest movement that started Nov. 17. It also marks the end of a two-month national debate that Macron organized to respond to protesters’ concerns about sinking living standards, stagnant wages and high unemployment.

The violence started minutes after the protesters gathered Saturday, when they threw smoke bombs and other objects at officers along the famed Champs-Elysees — scene of repeated past rioting — and started pounding on the windows of a police van, prompting riot police to retreat.

Simultaneous fires were also put out from two burning newspaper kiosks, which sent black smoke high into the sky. Several protesters posed for a photo in front of one charred kiosk.

Demonstrators also targeted symbols of the luxury industry, as shops including brands Hugo Boss and Lacoste were smashed up and pillaged, and mannequins thrown out of the broken windows. A posh eatery called Fouquet’s, which is associated with politicians and celebrities, was vandalized and set on fire. A vehicle burned outside the luxury boutique Kenzo, one of many blazes on and around the Champs-Elysees.

Interior Minister Christophe Castaner said on French television that an estimated 10,000 yellow vest protesters were in Paris and another 4,500 protesters were demonstrating around France. He also said the crowd included 1,500 “ultraviolent ones who are there to smash things up.”

Still, the numbers paled beside the 30,000 people estimated to be taking part in a separate climate march that was weaving through Paris at the same time, according to Castaner.