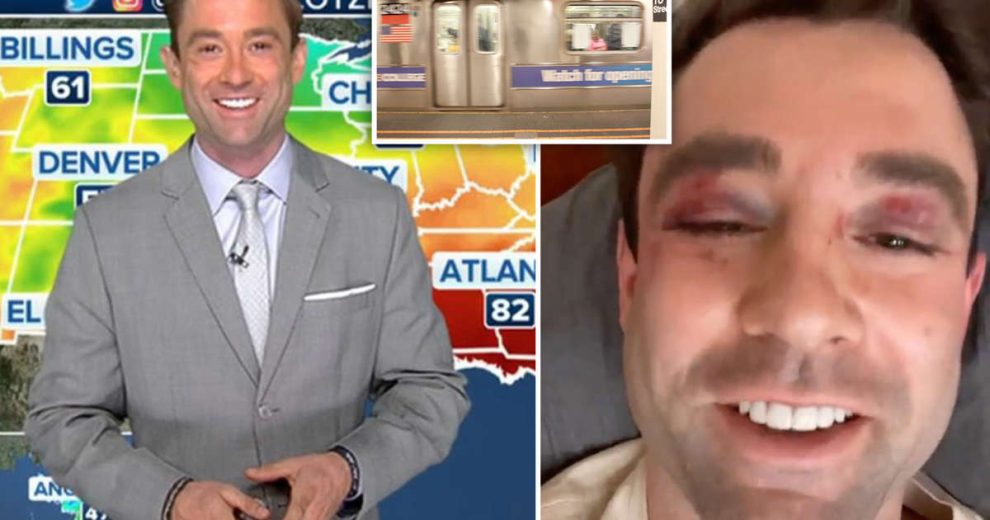 A bruised and battered Fox News meteorologist said Sunday that about eight teenagers had jumped him on a New York City subway train after he stopped them from harassing an older male.

Adam Klotz, 37, a meteorologist for FOX News Channel and FOX Business Network, posted a video on Instagram showing cuts and bruises on his face following the attack, which happened early Sunday morning on his way home on the No. 1 train after watching the New York Giants NFL playoff game at a bar.

“My side is worse, so much worse in my face,” Klotz said.

The altercation happened around 1:00 a.m. when the teenagers, allegedly smoking marijuana, attacked and approached the man on the train, police sources told The New York Post.

Klotz said the teenager held him on the ground and bruised his ribs.

“They got their hits in,” he said, adding, “Where are the parents? Parents, watch your children.”

Klotz said the older gentleman he defended left without injury while the weatherman got x-rayed by medical professionals and treated for non-life-threatening injuries at Bellevue Hospital.

Sources told The Post authorities caught three of the suspects — two 15-year-olds and a 17-year-old — after attempting to flee the subway train at the 18th Street station.

“Juvenile reports were prepared, and their parents were called to pick them up,” NYPD told The Post.

The NYPD spokesman added the department did not have the option to charge the suspects because of their ages, and the crime was technically classified as an apparent misdemeanor.

New York City crime increased on the subway by 30 percent and more than the 22 percent increase in general major crime across the city in 2022, The Daily Mail reported.

Just below street level in New York City’s subway system, crime figures increased on the subway by 30 percent and more than the 22 percent increase in general major crime across the city in 2022.

Mayor Eric Adams said toward the end of last year that the city is “laser-focused” on fighting crime, which Bloomberg reported this year the department would spend an additional $20 million each month on police overtime.

Fox News weatherman, Adam Klotz was pummeled by a group of teens on NYC subway train and for some reasons he finds it funny and says it’s all good because it’s NYC. pic.twitter.com/DtJ6czaMOW