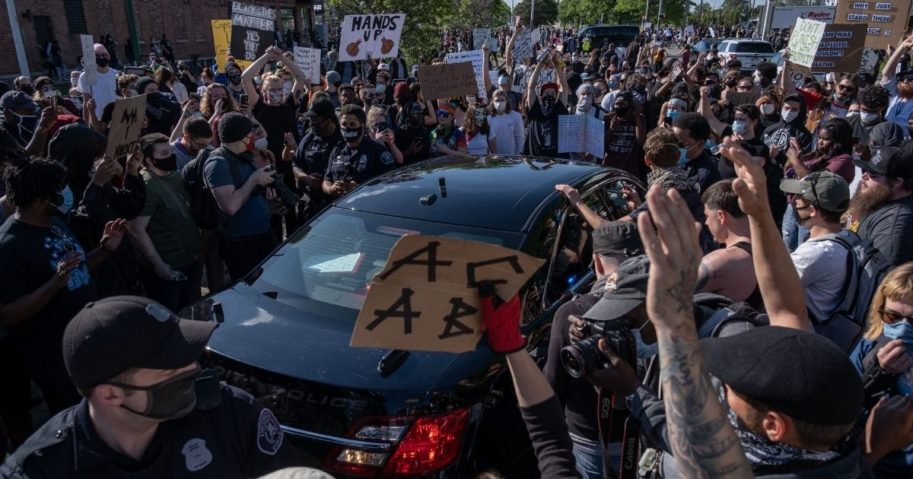 The Florida state Legislature has approved a remarkable anti-rioting bill that establishes serious punishments for those engaging in today’s favorite pop-progressive form of “mostly peaceful protest” — and protects the law-abiding citizens who are typically harmed by this practice.

According to a fact sheet from GOP Gov. Ron DeSantis, to whose desk the legislation is now headed, the bill makes it a felony offense to gather in a destructive assembly and to obstruct traffic or destroy a public monument during such an assembly.

It increases penalties for those who assault or pelt objects at members of law enforcement during a “violent or disorderly assembly” and those who come from out of state to engage in a riot. It also prevents state aid from going to localities that defund police.

What’s more, it provides protections for citizens forced to use their vehicles as weapons when threatened by an unruly mob.

According to DeSantis’ fact sheet, while the bill will make it a third-degree felony to obstruct traffic during an unpermitted protest or a riot, it also establishes that a driver is “NOT liable for injury or death caused if fleeing for safety from a mob.”

The governor’s summary reads like the bill was crafted after lawmakers binge-watched footage of the 2020 riots. It’s incredibly refreshing to see this trend of near-total lawlessness in the name of “justice” confronted head-on.

It’s not just large-scale riots the lawmakers had in mind. They also included special provisions for the victims of our modern version of Hitler’s Brownshirts: those psychotic people who try to force innocent restaurant patrons to show solidarity with their radical cause.

The new legislation makes it a first-degree misdemeanor for rioters “to harass or intimidate a person at a public accommodation, such as a restaurant.”

This is exactly the kind of legislation that any self-respecting lawmaker should be pushing. And it couldn’t be more timely, as a police shooting has sparked new riots in Minneapolis before the trial of former Minneapolis police officer Derek Chauvin has even come to a conclusion.

“This legislation strikes the appropriate balance of safeguarding every Floridian’s constitutional right to peacefully assemble, while ensuring that those who hide behind peaceful protest to cause violence in our communities will be punished,” DeSantis said of the bill in a statement.

That just about sums up what makes this legislation so important.

Though they’re about five minutes from being canceled in today’s pop-protest circles, we admire figures like Martin Luther King Jr. and Mahatma Gandhi not just because of what they did, but because of how they did it.

Their movements used peaceful protests to challenge immorality in governance, not Alinskyite fear tactics to try to topple civil society. King and Gandhi made great strides, while violent responses to segregation in the U.S. and the British occupation of India failed to have the same impact.

Nothing could be more important to the advancement of Western civilization than to protect any earnest mission to peacefully stand up for justice.

The left doesn’t seem to understand that conservatives oppose their movements not because we support a phantom system of oppression.

It’s because if torching small businesses, intimidating random members of the public and causing violence and mayhem is their response to Gandhi’s call to “be the change you wish to see in the world,” millions of Americans simply do not want to live in that world.

The most brutal truth for our constitutionally and historically illiterate modern “protesters” is that the First Amendment is predicated on the fact that every single one of us is subject to a Higher Power who sets the standard for what is true, good, just and lawful.

You cannot fight for justice when you utterly disregard that standard. Period.

Good on Florida for drawing the line in the sand and striving to uphold the essential law and order that is vital to any truly just society.