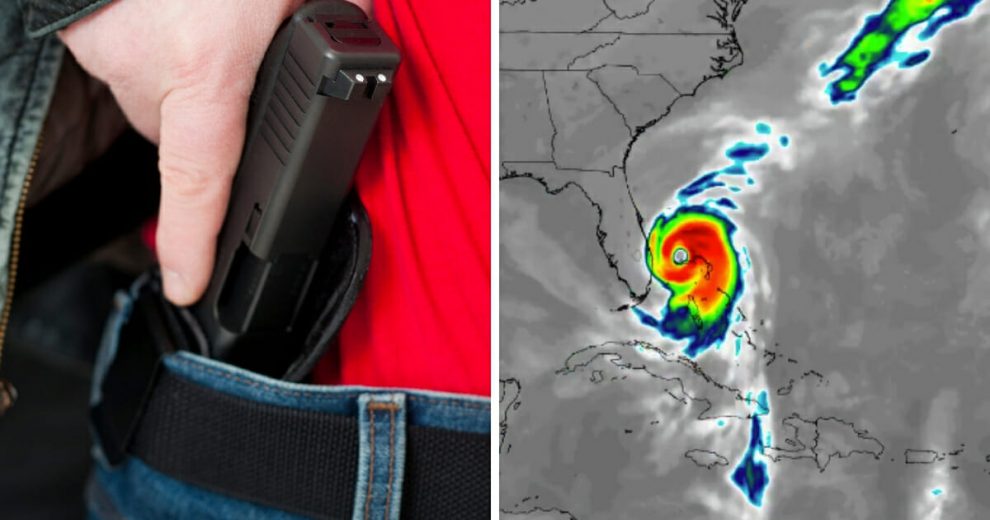 Hurricane Dorian is likely about to hit the state of Florida and cause a wide swath of destruction.

As of early Saturday morning, the hurricane is a Category 4 storm with maximum sustained winds up to 140 miles per hour, according to The Weather Channel. That means a whole lot of mandatory evacuations are likely coming — and there’s an important suspension of a critical gun law that those fleeing the hurricane need to know about.

Florida had a 32.5 percent gun ownership rate as of 2015, and not all gun owners have concealed carry permits. That would ordinarily raise a quandary; if you can’t carry your firearm in an evacuation situation, you’d have to leave it behind in your home during a period where looting is likely to be a problem.

“HB 209/SB296 created an exception to the conceal carry law and allowed a person to carry a firearm concealed without a permit while evacuating pursuant to a mandatory evacuation order during a state of emergency declared by the Governor under Chapter 252 or an emergency declared by a local official under Chapter 870,” an explanation on the Florida Sheriff’s Association website reads.

“The stated necessity for the legislation was that Florida law prohibited people from taking their firearms with them in the case of an emergency declaration and mandatory evacuation order, thus forcing Floridians to leave their guns behind,” it continues.

“In addition, testimony by the NRA and Florida Carry relayed examples of seizure of firearms in Louisiana during Hurricane Katrina.”

However, neither could name instances when guns have been seized in the state of Florida.

The law also doesn’t just apply to mandatory evacuations, which are covered under Chapter 252.

Are you in Dorian’s path?

Chapter 870 is a different kind of emergency, referring to when there’s “a very specific set of dangerous circumstances related to riots and civil unrest.”

“The law provides, in part ‘Whenever the sheriff or designated city official determines that there has been an act of violence or a flagrant and substantial defiance of, or resistance to, a lawful exercise of public authority and that, on account thereof, there is reason to believe that there exists a clear and present danger of a riot or other general public disorder… he or she may declare that a state of emergency exists within that jurisdiction or any part or parts thereof,’” the page reads.

None of these laws change anything relating to individuals who already have concealed carry permits, obviously. In addition, Florida law allows you to carry your firearm in “the interior of a private conveyance, without a license, if the firearm or other weapon is securely encased or is otherwise not readily accessible for immediate use.”

Part of the confusion involves the fact that under Chapter 252, the governor can suspend selling or transporting firearms.

In addition, Chapter 870 automatically invokes special regulations involving firearm carriage, but those involve carrying them in public while not licensed to do so.

“Significantly, under either statute, nothing authorizes the seizure, taking, or confiscation of firearms that are lawfully possessed, unless a person is engaged in the commission of a criminal act,” the Sheriff’s Association emphasizes.

“This means that if you are in lawful possession of your firearm (have a concealed carry weapons permit or are transporting in a car securely encased) and not committing a crime, the law does not authorize the confiscation or seizure of your firearm regardless of the emergency declaration provisions.”

Dorian could inflict a direct hit on Florida, and many current projections show it could be the strongest storm to hit the mainland of the Sunshine State since Hurricane Andrew over a quarter-century ago.

Visualization of the storm evolution from ECMWF 12z simulated satellite imagery — not exactly an ideal situation, but eh.

There are promising signs that Hurricane Dorian might not make direct landfall in the state of Florida.

That being said, Brevard County on the state’s east coast has already called for a mandatory evacuation starting at 8 a.m. on Sunday, and there’s likely more of that on the way, particularly considering that Florida Gov. Ron DeSantis has declared a state of emergency throughout the state, according to WFLA.

In a situation like this, it’s good to know that your Second Amendment rights are being protected.

If the situation degrades, this is going to keep a lot of Floridians safer. (Although honestly, constitutional carry is the way to go. Baby steps, though.)

If you’re in Dorian’s path in Florida, you own a firearm and you don’t have a concealed carry permit, you can find out more information here.

Know your rights, know the law — and, most importantly, be safe.