More than 150 million Americans are under weather alerts as a massive winter storm moves east across the US, blanketing regions with accumulating snow and leaving behind dangerously cold weather. Adverse weather conditions have been enough to cause the second day of travel chaos across the country’s eastern half, just one day before Christmas weekend.

After 2,500 flights were canceled Thursday, another 3,100 have been canceled as of 0600 ET Friday, according to flight tracking site FlightAware. These flights include within, into, or out of the US. About 800 have been delayed so far. 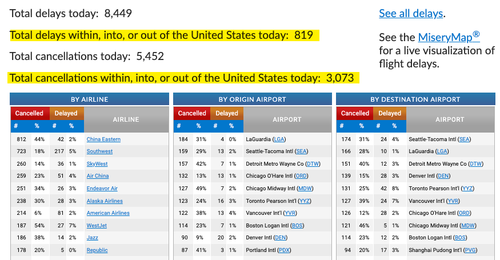 The peak intensity of the winter storm is forecasted today over the Great Lakes. Blizzard conditions are anticipated from eastern Wisconsin and far northeastern Illinois to portions of Michigan, northern Indiana, northern Ohio, western Pennsylvania, and western New York. The storm will also usher in fridge temperatures for the easter half of the US, making this Christmas weekend the coldest in four decades. 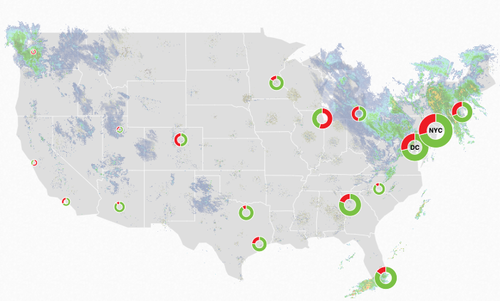 Even though the storm has passed the central part of the US, an arctic blast lingers and is pushing eastward today. 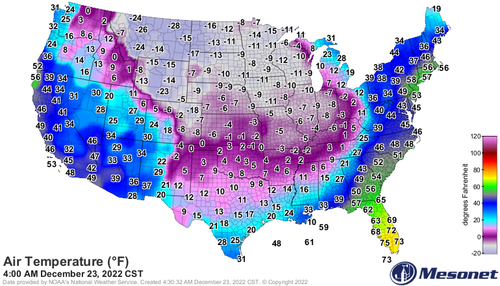 Here is the current 24-hour change in wind chill, I don't think I've ever seen a -60° on this map let alone several of them pic.twitter.com/2Ikk9xQo2L

By Christmas, average temperatures across the Lower 48 will begin to rebound from 25 degrees Fahrenheit (well below a 30-year trend) to nearly 50 degrees by Jan. 1. 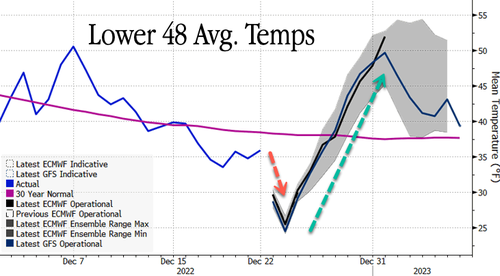 Rebound in temperatures next week is why natural gas prices are sinking lower. Now we wait for the next cold blast.