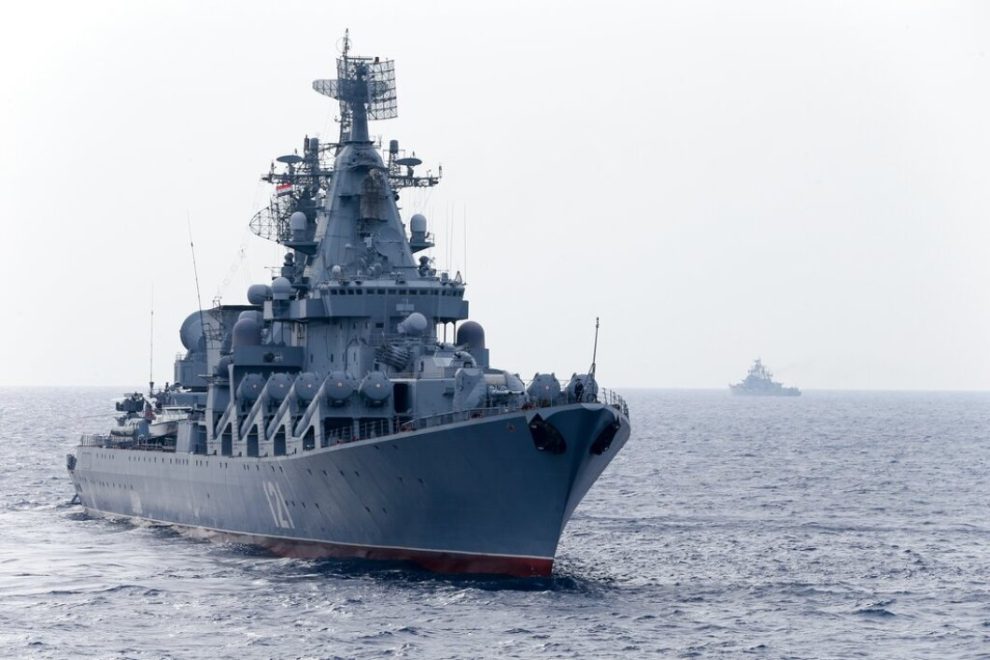 On Wednesday afternoon, Eastern, multiple Ukrainian sources started reporting that the Moskva (Moscow), the flagship of Russia’s Black Sea Fleet, had been hit by two Neptune anti-ship cruise missiles fired from near Odesa. The missile is a native Ukrainian design based on the Russian Kh-35, but it has superior range and accuracy because it wasn’t designed in Russia. It has a range of about 175 miles and only entered active service in 2021.

Think of Moskva as a 12,500-ton, 612-foot mobile missile battery with nearly 500 people aboard. She packs enough anti-ship missiles to wipe out the entire Ukrainian navy and enough air-defense missiles to swat away any conceivable aerial attack on the Black Sea Fleet’s amphibious flotilla.
…
She packs 16 fixed launchers for P-1000 anti-ship missiles with a range of 300 miles, vertical tubes for 64 S-300 air-defense missiles with a range of 56 miles, rail launchers for 40 Osa missiles for aerial self-defense plus a bevy of guns—twin 130-millimeter guns that can hit targets 15 miles away plus self-defense guns. Torpedo tubes and a helicopter round out her capabilities.

The cruiser’s sensors make her self-sufficient as a missile battery. The ship’s Top Pair and Top Steer radars can peer out to 200 miles or farther. Moskva led the Russian navy’s seaborne assault on the Republic of Georgia back in 2008, protecting three amphibious ships that landed a battalion or two of naval infantry.
…
It’s not clear how many Neptunes it might take to punch through Moskva’s defenses. Nor is it clear how many Neptunes the Ukrainians possess.

Though the sources reporting the hits were unusually trustworthy, they were Ukrainian (by the way, since this war started, I’ve found that official Ukraine sources are very conservative on their announcements and are more likely to lowball claims than puff them up) and I was reluctant to run a story without neutral verification. That came from Russian state media. This is via RIA Novosti.

The ammunition detonated as a result of a fire on the Moskva missile cruiser, the Russian Defense Ministry said.

The crew was completely evacuated. The reasons for the incident are being established.

Just to reiterate, the Russian Defense Ministry has announced the Moskva is heavily damaged, and the crew evacuated. Fire and explosives and no crew are not a good combo for a warship.

Full quote from Russian MoD
“The Moscva was seriously damaged, the crew was completely evacuated. Ammunition exploded. The cause of the fire is under investigation”.

Further information. This is fairly unprecedented to admit such an own goal. This is the end of the war for Moskva. Russia has no large dry docks or maintenance/repair facilities in the Black Sea. https://t.co/JlbgaJdf4R

Thus far in the war, the Russian Navy has lost one large landing ship, another large landing ship sustained damage, a Raptor patrol boat was struck by an ATGM, and now the Black Sea Fleet's flagship has sustained "serious damage" likely a result of a Ukrainian strike. 3/ pic.twitter.com/3rGscjChTg

What can we take away from this incident?

First, with the crew evacuated, damage control is no longer possible. For a ship carrying in excess of 16 tons of high explosives in the missile launch tubes in addition to propellant in launch tubes, the odds of saving the ship approach zero. That is why I’d credit the claims of Moskva sinking. Even if it can be salvaged, the Russian naval facilities in Sebastopol can’t do the repair work required for Moskva to travel for repairs.

Second, if the account of the strike is anywhere near accurate, the discipline in the Combat Information Center was nonexistent. If that state of indiscipline exists in a fleet flagship, imagine what it will be like on something without an admiral on board.

Third, many experts asserted that it would need at least six Neptune hits to put the Moskva out of action. We know that isn’t true. Why it wasn’t true needs to be studied. Was the Moskva operating understrength? Was the crew operating at the usual slovenly standards we’ve come to expect of the Russian military? Was the ship’s design flawed? Are the defensive sensors not quite as effective as the manufacturer’s brochures might indicate?

Fourth, the Moskva has 6 of the Russian equivalent of the Phalanx Close-in Weapons System (CIWS). Yet two cruise missiles, precisely the threat the CIWS was designed to counter, leaked through. Was it the fault of defective equipment? Or was it “human factors?”

The politics of the sinking of the Moskva will be seismic. The Moskva is the ship that called upon Ukrainian troops on Snake Island to surrender during the early days of the war and received the memorable response “Russian warship…go f*** yourself” and had a Ukrainian postage stamp designed in honor of the event.

The one thing a totalitarian regime or someone who visualizes himself as a “strongman” can’t tolerate is ridicule, and the sinking of the Moskva will create plenty of that. So we need to expect major air, and missile strikes in Kiev as Putin tries to teach these Ukrainian недочеловек…you’d recognize the word in its original German, Untermenschen…a bloody lesson.

But every tragedy has a silver lining…if you look hard enough.

You all want to know the kicker for this?

Now the crew of the Moskva gets to be infantry replacements in Mariupol.

Putin is putting ashore Black Sea ship crews to fight as infantry like its WW2.
1/ https://t.co/Ox5LcGAXZy