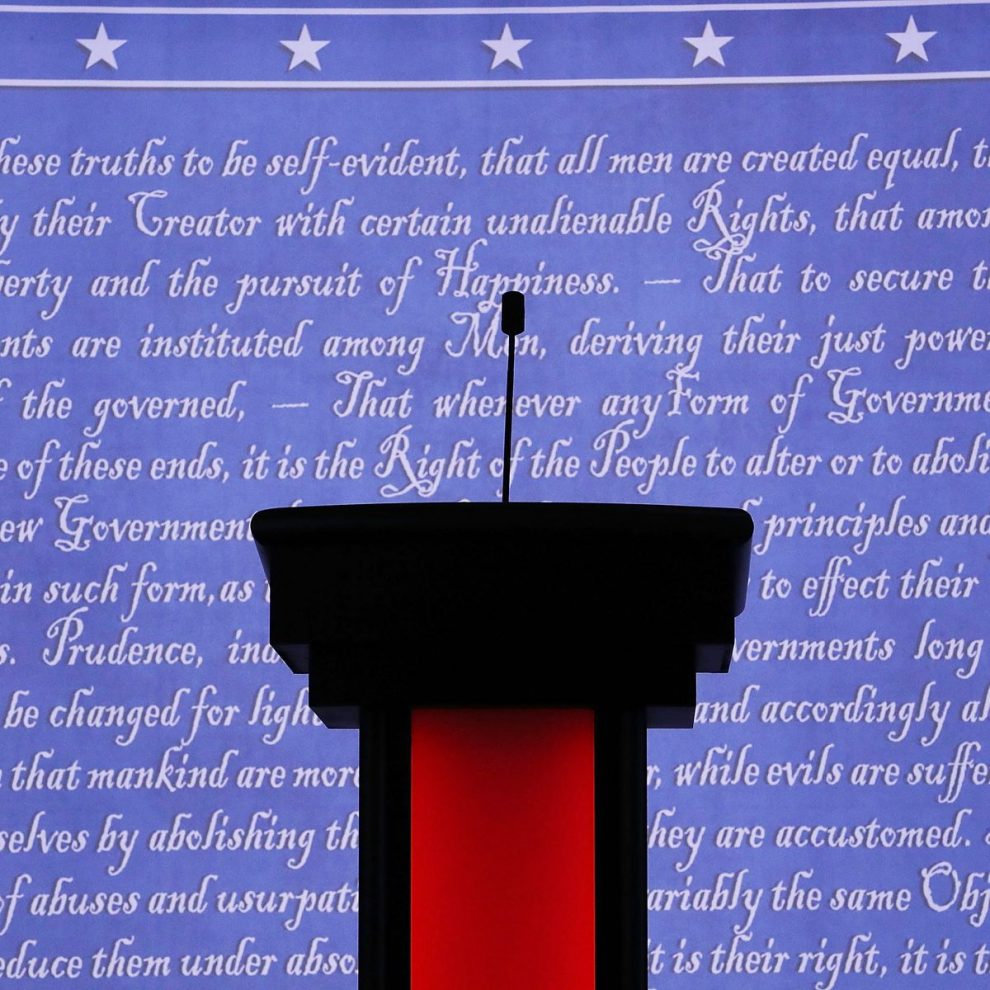 A raucous and chaotic clash between President Trump and former Vice President Joe Biden gave Americans their first chance to weigh their choices side by side in a White House contest that has until now remained remarkably stable.

The coronavirus pandemic allowed both candidates to avoid an awkward, and probably unwelcome, handshake that would have happened moments before the shouting started.

“This was the most chaotic and attack-filled presidential debate in our history,” Mitchell McKinney, director of the Political Communication institute at the University of Missouri, said shortly after its conclusion.

Here are five things we took away from the collision in Cleveland:

Trump wasted one of three chances he’ll have during this year’s presidential debates to shake up a race that he’s clearly trailing, according to both national and battleground state polls.

Trump’s constant interruptions, of both Biden and moderator Chris Wallace, were at once disjointed and unfocused, a fusillade of assaults that failed to damage his rival.

“I guess I’m debating you, not him, but that’s OK, I’m not surprised,” Trump told Wallace at one point.

Later, he called his rival stupid: “There’s nothing smart about you, Joe,” Trump said.

Trump has relied less on the traditional framing of the presidency than his predecessors, and his most hardcore supporters appreciate his willingness to blow up politics as usual. But it is unlikely that any of the voters Trump needed to win were persuaded by his haymaker performance.

Republicans plotting the November campaign have been frustrated with Trump’s almost sole focus on his most ardent supporters.

Yet faced with the largest audience he has had since his inauguration in 2016, Trump spent Tuesday talking once again to that narrow slice.

“President Trump needed to move moderate and suburban voters into his column by promoting optimism and a forward looking agenda for the second term. Instead, there was a lot of doom and gloom about crime and racial tensions in the country,” said Aaron Kall, director of debate at the University of Michigan.

For months, Democratic strategists have worried that Biden would lose his cool and fall prey to Trump’s baiting — especially when it came to his son, Hunter Biden.

Trump’s attacks on Hunter Biden covered the same bases Republicans have returned to in recent months, from his work for a Ukrainian gas company to investment business he has conducted in other countries. But Trump plumbed new depths, too, by raising Hunter’s past drug use.

Biden, a veteran of two vice presidential debates and dozens more debates with fellow Democrats during the 2008 and 2020 primaries, stayed largely calm, save for a momentary flash of anger when he brought up Trump’s comments denigrating veterans and members of the military.

“Joe Biden avoided any major gaffe or stumble tonight that would feed into the Trump narrative that Biden is too old or not fit for serving as president,” McKinney said.

The contrast between where each of the two candidates kept their eyes was startling.

Trump, leaning on his podium, watched his prey, preparing to pounce at every opportunity.

Biden repeatedly turned to the camera to address the voters watching at home.

“You folks at home, how many of you got up this morning and had an empty chair at the table because someone died of COVID?” Biden asked at one point. Later, Biden said of Trump: “He doesn’t want to talk about what you need, you, the American people.”

Had Trump toned down the aggressive interruptions, perhaps some of Biden’s comments would stand out as more striking. The longtime senator who used to refer to even his harshest critics as his friend called a sitting president a “fool” and a “clown.”

At one point, faced with an endless Trump monologue, Biden shook his head: “Will you shut up, man.”

In the Democratic primary, comments like that would have earned Biden a swift backlash. But against Trump, they seemed less surprising.

The debate is unlikely to change many minds

Tuesday’s tangle will shrink the pool of undecided voters, but not to a substantial degree.

In fact, it may have the rare consequence of shrinking the actual pool of voters overall — Republican pollster Frank Luntz, conducting a virtual focus group during the debate, said some of the undecided voters on his panel said they had decided not to vote.

“I’ve never seen a debate cause this reaction,” Luntz said on Twitter.

This late in an election cycle, debates have rarely moved the needle by substantial margins. Debate experts say most people tune in for the reinforcement they need to get excited about their chosen candidate, rather than to decide which candidate to chose in the first place.

“For all of its ugliness, nothing happened in the debate that changes the fundamentals of the race. Trump is behind and to beat Biden, he needs to land punches. He just didn’t do it,” said Doug Heye, a former top spokesman at the Republican National Committee who does not support Trump.

Even before Tuesday’s debate, polls show only a tiny sliver of Americans remain undecided about their choice. If President Trump is skilled at anything, it is in crystalizing public opinion — few Americans feel anything other than total adoration or total revulsion toward the White House’s current occupant.

“For any of the few persuadable voters out there, if they managed to make it through the hour and 15 minutes of constant interruptions, they had to leave this event honestly not sure what to think,” said Michael Bitzer, a political scientist at Catawba College. “For the significant majority of Americans whose minds are already made up, I am doubtful anyone saw something that would have changed their minds.”

Will there be another debate?

The answer appears to be yes, though there was chatter at the debate’s conclusion that raised questions.

“We are going to the debates, guys. I don’t now how many different ways we can say it,” Biden’s deputy campaign manager, Kate Bedingfield, said on a call with reporters. “Yeah, we are committing to attending the debates.”

For months, the Trump campaign has raised questions about whether Biden would show up for any debates — despite the fact that Biden’s team said early, often and on the record that he would meet Trump on stage.

Instead, it always seemed more feasible that Trump would pull out of a debate. After all, of this year’s two nominees, Trump is the only one who has actually skipped a debate, to protest the moderators at a Republican primary skirmish back in 2015.

But in truth, neither candidate has the incentive to pull the plug on the two remaining debates, scheduled for Oct. 15 and Oct. 22.

Trump, who is clearly trailing in both national and battleground polls, needs to reframe the race to his favor, and time is running out. Biden, who has forcefully pushed back against Trump questioning his mental fortitude, would play into the conservative narrative if he did skip out.

The debates will go on. Whether America is ready for them or not.