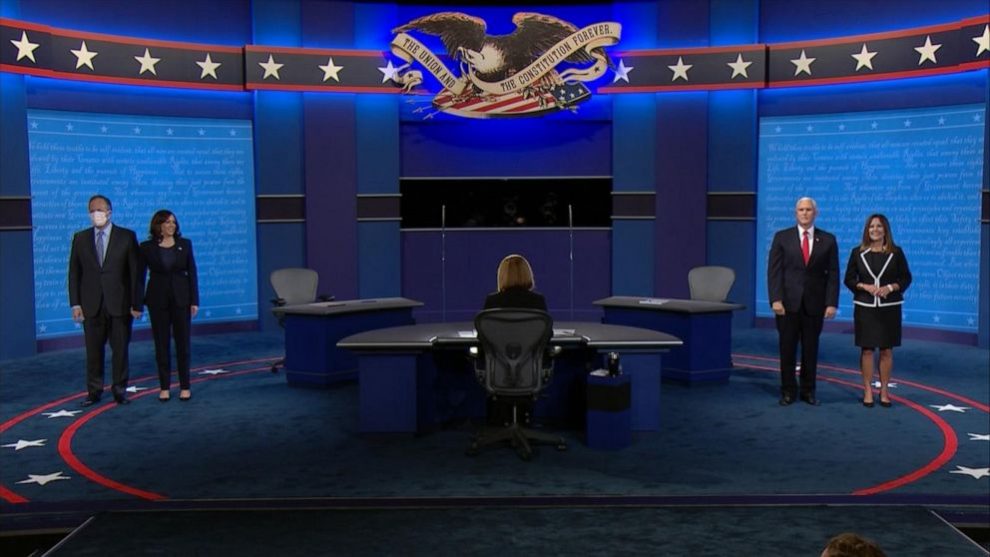 What were the main takeaways?

The Democratic ticket has a significant polling lead, so a draw with Pence and an avoidance of major errors would have been fine for Harris.

She did better than that.

In the debate’s opening minutes, she was excoriating the Trump administration’s response to the coronavirus pandemic, describing it as “the greatest failure of any presidential administration in the history of our country.”

She landed punches on other topics, too, including health care, Trump’s alleged disparagement of members of the military and the president’s finances.

Referring to recent disclosures that Trump has significant debt, she said: “It would be really good to know who the president of the United States, the commander in chief, owes money to, because the American people have a right to know what is influencing the president’s decisions.”

It wasn’t a perfect performance. Harris blatantly dodged the question of whether she and Biden planned to pack the Supreme Court if Trump succeeds in confirming Judge Amy Coney Barrett, a favorite of conservatives, to the bench.

But, overall, Harris scored a win, when all she needed was to avoid a clear defeat.

Pence did his job

The vice president is an infinitely more orthodox politician than Trump, and he showed this yet again on Wednesday evening.

A former radio talk show host, Pence is an effective debater who is almost impossible to rattle — something that he proved four years ago in his one debate with Hillary Clinton’s running mate, Sen. Tim Kaine (D-Va.).

He was especially effective on Wednesday in making the case for the Trump economy. He did so in a more persuasive and measured way than Trump himself usually does. Pence can also display some degree of empathy, another Trump weak spot.

The vice president took some heat on social media for going over his time limits and for interrupting Harris at times. But he also avoided major mishaps and sometimes pushed Harris back on the defensive.

It was, in short, a proficient performance — but one unlikely to win new converts for a ticket that badly needs them.

The two candidates dodged a lot of questions and did not really face any significant ramifications for doing so.

Examples were numerous. One came when Pence was asked about the Trump administration’s efforts to repeal the Affordable Care Act. He answered by discussing his pro-life credentials and asking whether Biden and Harris would pack the Supreme Court. Harris, in turn, ducked that question.

The vice president, in particular, skated away from a number of other questions, including whether the American public deserved more transparency around Trump’s health, and what he would if Trump does not commit to a peaceful transfer of power.

The debate moderator, Susan Page, faced criticism for not doing more to tie the candidates down to firm answers.

There was no question about the most viral moment of the night.

In the debate’s later stages, a fly landed on Pence’s head, staying there for some time. The vice president did not react — but Twitter did.

The Biden team tweeted out a photo of the former vice president armed with a swatter, along with a request for donations. Democrats also appeared to register the internet address “flywillvote.com,” from which readers were redirected to a Democratic National Committee page encouraging people to register to vote.

The fly provide some light relief in a pretty dark campaign.

The fact that it was one of the most interesting features of Wednesday night’s debate underlined how relatively mundane this clash was, especially compared to last week’s Trump-Biden pyrotechnics.

The end result, then, is likely to be negligible in a race defined by big issues, including the pandemic, the economy and Trump’s tumultuous character.

Democrats benefit from the shape of the race remaining unchanged.

But in a year where every precedent and expectation has been shattered, who knows what could come next?