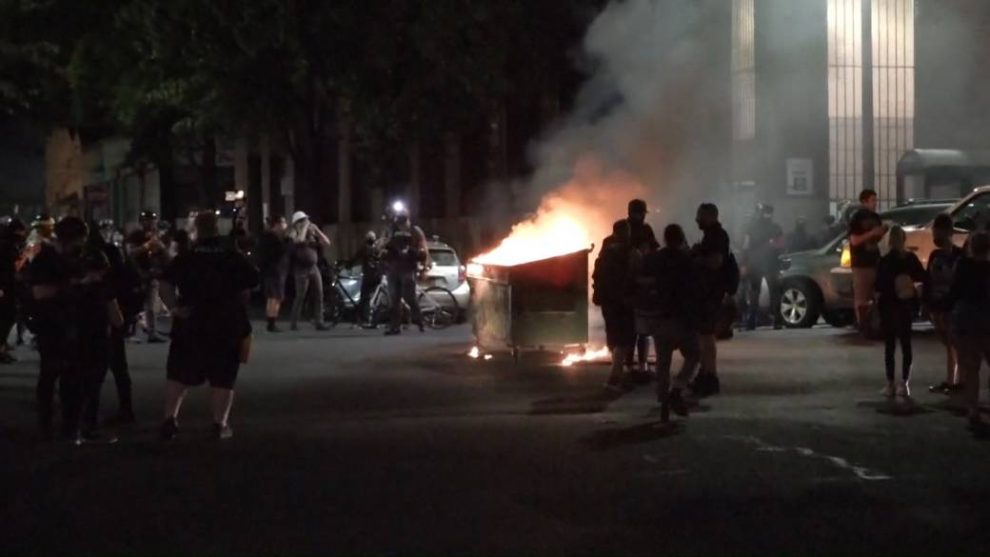 Portland experienced chaos yet again early Wednesday after a fire was set inside the city’ Multnomah Building prior to the police department declaring another riot.

Police took to Twitter to declare the riot “after individuals vandalized, repeatedly smashed first floor windows with rocks and threw burning material into an office.”

The department retweeted a video posted by Hannah Ray Lambert, a reporter with KOIN News, who filmed a small fire with a crowd in the background chanting, “What did you see? Didn’t see sh–!”

.@PortlandPolice has declared the gathering near the Multnomah Building a riot after individuals vandalized, repeatedly smashed first floor windows with rocks and threw burning material into an office. https://t.co/PtByF6Gx6h

The Oregonian reported that Tuesday marked the city’s 83rd night of protests and described the Multnomah building as the county seat of government. The paper added that the protest was peaceful at first.

The crowd gathered at Colonel Park in southeast Portland at about 8:00 p.m. on Tuesday and about an hour later about 200 marched to the Multnomah Building chanting, “say her name, Brionna Taylor,” KPTV.com reported.

The death of Taylor, a 26-year-old African-American woman in Louisville,Ky., has drawn national attention amid the debate over police use of force against Blacks and other minorities.

Taylor was shot multiple times as police entered her home on a “no-knock” warrant. Her boyfriend, Kenneth Walker, fired at police, allegedly hitting one officer in a leg.

Walker has claimed he fired his weapon because he thought the apartment was being robbed. The initial charge of attempted murder he faced was later dropped, WDRB reported.