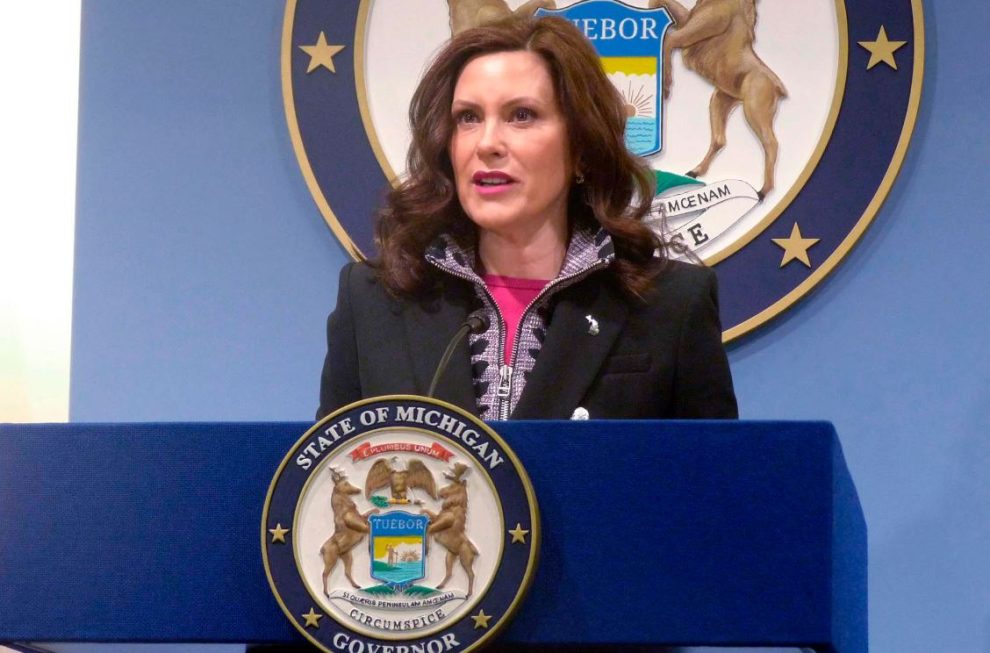 Shockingly and disgracefully, two men have been found guilty of plotting to kidnap Michigan Governor Whitmer in a retrial of a now infamous entrapment case perpetrated by the FBI:

In a do-over for the government, a federal jury in Grand Rapids has convicted two men charged with plotting to kidnap Gov. Gretchen Whitmer out of anger over her handling of the pandemic, ending a dramatic trial that highlighted the growth violent extremism in America.

The jury deliberated for about eight hours before delivering the guilty verdicts against Adam Fox and Barry Croft Jr. , who were convicted on all counts and face up to life in prison when they are sentenced at a later date.

Fox and Croft were convicted of kidnapping conspiracy and conspiracy to possess weapons of mass destruction. Croft was convicted on an additional weapons charge.

ADAM FOX:
Guilty on Conspiracy to kidnap
Guilty on possession of weapon of mass destruction

The article cited above generously refers to this trial as a “do-over,” referring to the fact that a previous trial against the same defendants and two others resulted in no convictions.

The men were judged by a second, more diverse jury than in the first trial, which ended with no convictions for the government. Two men were acquitted in that trial and the jury deadlocked on charges against Fox and Croft Jr., triggering a mistrial that prompted the government to try again.

Julie Kelly reports that it wasn’t just the new jury that allowed the government to secure its coveted “domestic terror,” conviction, but a completely biased and hostile judge:

Was doing an interview and missed verdicts

Adam Fox: Guilty on all charges

Barry Croft: Guilty on all charges

Unbelievable. Judge put his full weight on the scale in favor of government and it worked.

Shame on Judge Jonker. He rigged this trial so much the jury had little choice.

*In both trials, withheld from jury hundreds of incriminating texts between FBI handlers and informants

*Refused to compel appearance by Steve Robeson, lowlife informant who aided in the hoax…

jury instructions that green-lighted whatever argument the DOJ made

*Kept juror defense objected to after receiving info the juror was predisposed to a guilty verdict. Judge refused to dismiss, spoke with juror w/o defense, govt attys present, and ordered all filings under seal.

Judge Jonker, a GWB appointee, handled this trial far differently than the first.

You're telling me a jury didn't convict on a SINGLE COUNT in first trial with 2 more defendants but returned all guilty in less than half the time with 2 fewer defendants?

Jonker got the message.

Getting unconfirmed reports the juror accused of misconduct was the foreman.

It is important to emphasize just what a sham the Whitmer Kidnapping Plot really was. Defense Attorney Joshua Blanchard was a hero for correctly employing an entrapment defense—indeed, even by FBI standards the behavior here was egregious.

A look at the annotated indictment reveals that at every level of the [Michigan Kidnapping] plot, FBI operatives played the most important leadership roles:

-The plot’s “explosives expert,” who the plotters were accused of planning to buy bombs from, turned out to be an FBI agent.

-The head of transportation for the militia outfit turned out to be an undercover FBI agent.

-The head of security for the militia outfit turned out to be an undercover FBI informant.

-At least two undercover FBI informants were active participants in the initial June 6, 2020 meeting in which the plot to storm Capitol buildings was allegedly hatched — meaning at least three FBI informants infiltrated before the conspiracy even started.

The Michigan plot would be bad enough if it were simply an isolated scandal—but it is far from isolated. Indeed, Revolver News was the first to underscore the significant parallels between the Michigan Kidnapping hoax and the January 6 Fedsurrection:

Let’s recap what we’ve established. Just months prior to the U.S. Capitol Siege on 1/6, the FBI thwarted a similar plot involving a siege at the Michigan State Capitol, whose plotters belong to one of the three main militia groups associated with 1/6. The FBI was able to thwart this on the basis of an astonishing infiltration rate of said groups involving undercover operatives and informants who had been working in such capacity, just in one tiny Michigan network, for more than seven months. They were so well-infiltrated that they already had three informants embedded in this random Three Percenter network before any plot was even hatched. Furthermore, just days after the plot was foiled, FBI director Christopher Wray quietly promoted the FBI Special Agent in Charge of the Michigan Plot operation to a coveted D.C. field post, where he now oversees the investigation into 1/6.

The Special Agent in Charge, by the way, is who establishes, extends, renews and supervises all FBI undercover operations.

It is worth reading that again and letting it sink in: of all of the FBI agents FBI Director Wray could have promoted to the coveted DC Field Office position, he promoted Steven D’Antuono—the former head of the Detroit Field Office who oversaw the entire Michigan Kidnapping entrapment hoax.

Steven D’Antuono knows why the FBI is hiding critical footage of the January 6th pipe bomber:

The nexus between the January 6 fedsurrection and the Michigan entrapment hoax has spread from the pages of Revolver News to the mouths of mainstream Republican elected officials. Ted Cruz went viral asking FBI Director Christopher Wray about D’Antuono:

Senator @tedcruz Also Asks About The Promotion Of FBI Special Agent In Charge Of The Detroit FBI Field Office To The DC FBI Field Office Now Overseeing The 1/6 Investigation pic.twitter.com/aza2QXLhcp

Could it be that increased scrutiny on D’Antuono and the connections between the Whitmer Entrapment Hoax and Resurrection meant that the feds needed to redeem themselves and secure a conviction in the Whitmer case at all costs?

To ask the question is to answer it.