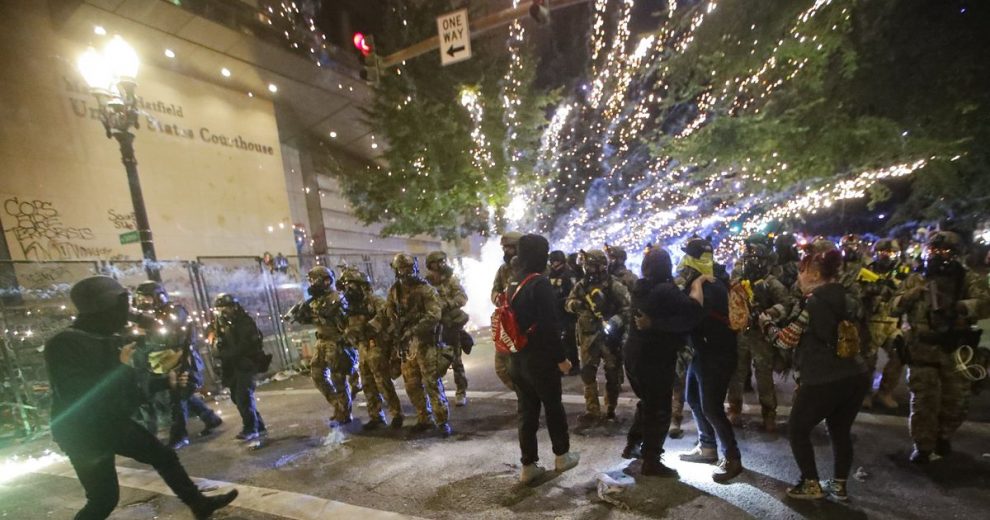 The FBI has opened more than 300 domestic terrorism investigations since George Floyd’s death in Minneapolis kicked off nationwide unrest and riots, a federal attorney revealed Tuesday in a hearing on Capitol Hill on Antifa and violent protests.

Erin Nealy Cox, a U.S. attorney tapped by Attorney General William Barr to lead a task force on violent anti-government extremists, said the feds have opened hundreds of federal criminal investigations surrounding the violence and rioting since May 28.

“They have since May 28 [opened] over 300 domestic terrorist investigations,” Cox told a Senate Judiciary subcommittee hearing on preventing violent protests. “That does not include any potential civil rights investigations or violent crime associated with the riots.”

At one point in the Senate hearing, he picked up a frozen water bottle and banged it on the desk, saying they have been thrown at officers as well as pipes and Molotov cocktails.

The hearing Tuesday titled “The Right of the People Peaceably to Assemble: Protecting Speech by Stopping Anarchist Violence” revealed deep divisions in how Republicans and Democrats view the sustained protests that have gripped the nation since Floyd’s death while in police custody.

The subcommittee chairman, Sen. Ted Cruz, R-Texas, focused on rioters and anti-government activists that have “hijacked” peaceful protests and unleashed harm and violence in certain cities, like Portland. He kicked off the hearing by playing a video contrasting the protests from Martin Luther King Jr., Mahatma Gandhi and the March for Life with the recent riots, the chaos it has caused, and the Democratic response to it.

“Their actions are profoundly racist,” Cruz said. “The rioters …. destroy minority communities, minority businesses and minority lives across this country. This shouldn’t be complicated: peaceful protests must be protected. Riots must be stopped.”

Meanwhile, Democrats focused their questioning on the federal government’s sometimes aggressive tactics in places like Portland and Washington, D.C., in dispersing crowds that they view as largely peaceful.

Sen. Mazie Hirono, D-Hawaii, says Tuesday’s hearing should instead be called: “The right of the people peaceably to assemble without being beaten up by unidentifiable federal agents.”

“That would address an actual problem lawful protesters are facing and the rest of us are seeing in this country,” Hirono said.

Sen. Jeff Merkley, D-Ore., described a scene in Portland where protesters were “holding flowers, dancing, chanting” and calling for equal justice for all when the federal government arrived in July. He says that then at around 11 p.m., federal law enforcement would emerge and attack peaceful protesters with “military-grade tear gas” and other tools.

Cuccinelli said there’s a difference between protesters and the rioters committing acts of violence.

“If we had done nothing, what would have happened to the courthouse, Mr. Cuccinelli, in Portland?” Graham asked.

Cuccinelli responded: “That courthouse wouldn’t be there.”

“So I challenge anyone on the other side to say differently,” Graham said. “If we hadn’t intervened they’d have burned the god–n thing down.”