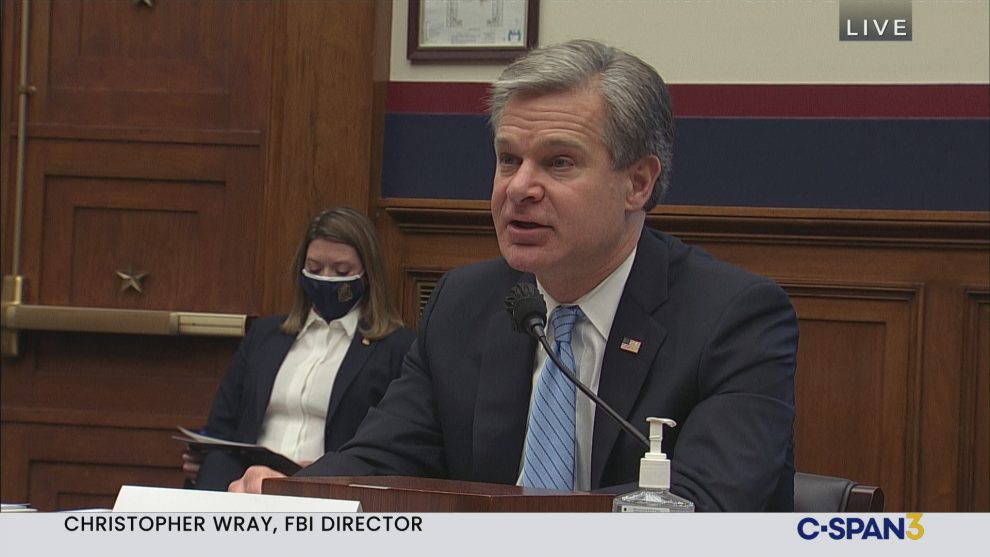 Federal Bureau of Investigations (FBI) Director Christopher Wray alluded to “collaboration between the private sector and the government,” during Thursday remarks at the World Economic Forum — as the bureau remains mired in scandal following the “Twitter Files” revelations and braces for aggressive Congressional investigations.

Wray, speaking to an audience of global elites at the Davos gathering, touched on the federal government’s work with ostensibly private technology companies, during a discussion about the potential dangers of new technology. The FBI chief touted the “significant strides” the FBI in particular has made in efforts to work more closely with the tech industry.

I think the sophistication of the private sector is improving and, particularly important, the level of collaboration between the private sector and the government, especially the FBI has, I think, made significant strides. Pretty much every technology we could talk about today, we see both great opportunity but great, great dangers in the wrong hands.

The FBI boss’s comments come amid a flurry of reporting on how the FBI was directing censorship practices at Twitter and other social media companies, particularly regarding the dissemination of the New York Post‘s reporting on Biden family corruption, based on Hunter Biden’s infamous “laptop from hell,” ahead of the 2020 election.

Emails revealed by Elon Musk and reported by journalist Michael Shellenberger last month showed that the censorship on Twitter of the Post‘s reporting on the Biden family business was an operation led by the FBI, in conjunction with Twitter.

Shellenberger’s reporting revealed that federal agents “discredited factual information about Hunter Biden’s foreign business dealings both after and *before* The New York Post revealed the contents of his laptop on October 14, 2020″ — working with top management at Twitter to censor and disparage the Post‘s reporting. Shellenberger’s reporting showed that the false narrative that the Post‘s 2020 reporting was part of an alleged “hack-and-leak” attack by “Russia” was conceived by the FBI — a narrative that was also adopted by legacy media as justification for their refusal to broadcast the story.

The FBI responded to the allegations by issuing a brash statement that refused to address the central claim in the reporting, saying the internal communications released by Musk “show nothing more” than normal day-to-day operations of the agency, and that the release of the correspondences were “conspiracy theorists” propagating “misinformation with the sole purpose of attempting to discredit the agency.” The FBI, in its statement, did not specify who it was referring to as “conspiracy theorists,” nor did it provide any explanation of what materials were “misinformation.”

The revelations pertaining to Twitter came after Facebook (now known as Meta) CEO Mark Zuckerberg over the summer told Joe Rogan that the FBI was warning Facebook of “propaganda” ahead of the 2020 election, urging the platform to be “vigilant” to censor:

The FBI, I think basically came to us — some folks on our team and was like, ‘Hey, um, just so you know, like, you should be on high alert. There was the — we thought that there was a lot of Russian propaganda in the 2016 election. We have it on notice that basically there’s about to be some kind of dump of — that’s similar to that. So just be vigilant.’

Shortly afterward, the Post published its first article about the “laptop from hell,” which Facebook curbed distribution of on the platform.

“We just kind of thought, Hey look, if the FBI, which, you know, I still view as a legitimate institution in this country, it’s a very professional law enforcement,” Zuckerberg told Rogan. “They come to us and tell us that we need to be on guard about something. Then I wanna take that seriously.”

While Zuckerberg said the FBI did not specifically identify the Hunter Biden story as the “Russian propaganda” in question, “it basically fit the pattern.”

Wray’s comments also come as the Republican-led House gears up to investigate the political activity of the Bureau, and how it conducts what appear to be political operations through co-opting private businesses.

Rep. Jim Jordan (R-OH) will chair the Select Subcommittee on the Weaponization of the Federal Government, to investigate the politicization of the FBI.

The subcommittee’s “probe into communications between tech giants and President Biden’s aides will look for government pressure that could have resulted in censorship or harassment of conservatives — or squelching of debate on polarizing policies, including the CDC on COVID,” according to a report by Axios. The GOP is reportedly comparing the subcommittee to the 1970’s “Church Commitee.”

Oversight Committee chair Rep. James Comer (R-KY) said last month that the GOP House must put a “halt” to FBI funding until they testify before Congress about their role in the censorship of the New York Post.

“Now, this we know with Twitter, we’ve heard similar stories from Zuckerberg. Who knows what went on at YouTube and Google? This is an agency that’s out of control,” Comer said on Fox Business Network’s Mornings with Maria.

And the most frustrating thing for me right now, Maria, is the fact that in this omnibus bill, there’s increased funding for the FBI, plus a $1.75 billion headquarters facility for the FBI. We need to halt everything with the FBI, all funding, until they come forward and explain to Congress exactly what they were doing, why they were doing it, and who gave them the authority to do it.

Most likely voters believe Congress should investigate the FBI’s involvement in social media censorship, according to a Rasmussen Reports survey released last month.