Anthony Fauci on Friday said he disagrees with President Trump that the country has rounded “the final turn” on the COVID-19 pandemic, and warned Americans not to get complacent heading into the fall.

Fauci, the federal government’s leading infectious disease expert, was responding to comments made by Trump during a press conference on Thursday, where he defended his comments made to Bob Woodward about deliberately downplaying the severity of the pandemic.

Trump said the U.S. was “rounding the final turn. And we’re going to have vaccines very soon, maybe much sooner than you think.”

Fauci, the head of the National Institute of Allergy and Infectious Diseases, said he disagrees with Trump’s assessment, noting that if Americans aren’t careful, the pandemic could worsen.

“I have to disagree with that, because if you look at … the statistics, they are disturbing. We’re plateauing at around 40,000 cases a day. And the deaths are around a thousand,” Fauci told MSNBC’s Andrea Mitchell.

Fauci said he hopes there is not a post-Labor Day surge of cases like there was following Memorial Day and July 4th, because the country’s infection rate is already too high.

“When you have a baseline of infections that are 40,000 a day and you have threats of increased test positivity in certain regions … what we don’t want to see is going into the fall season, you don’t want to start off already with a baseline that’s so high,” Fauci said.

When asked about the largely maskless crowd at Trump’s outdoor rally in Michigan on Thursday night, Fauci noted that just because an event is outside doesn’t make it safe.

“If you’re outdoors and you’re crowded together and you don’t have a mask, the chances of respiratory transmission of a virus clearly are there,” Fauci said. “Just because you’re outdoors doesn’t mean you’re protected, particularly if you’re in a crowd and you’re not wearing masks.”

Fauci, who previously said he doesn’t think Trump was trying to distort the reality of the pandemic, admitted that there have been “disagreements” between himself and the White House about messaging.

“Certainly there were disagreements. There were times I was out there telling the American public how difficult this is, how we’re having a really serious problem, and the president was saying it’s something that’s going to disappear, which obviously is not the case,” Fauci said.

Fauci added that there continue to be “some disagreements in what we say and what comes out from the White House,” but said they’re trying to get the right word out.

Fauci said he couldn’t comment specifically on what Trump said to Woodward “except to say yes, when you downplay something that is really a threat, that’s not a good thing.” 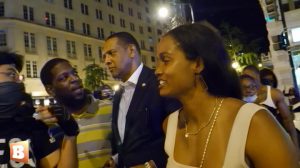