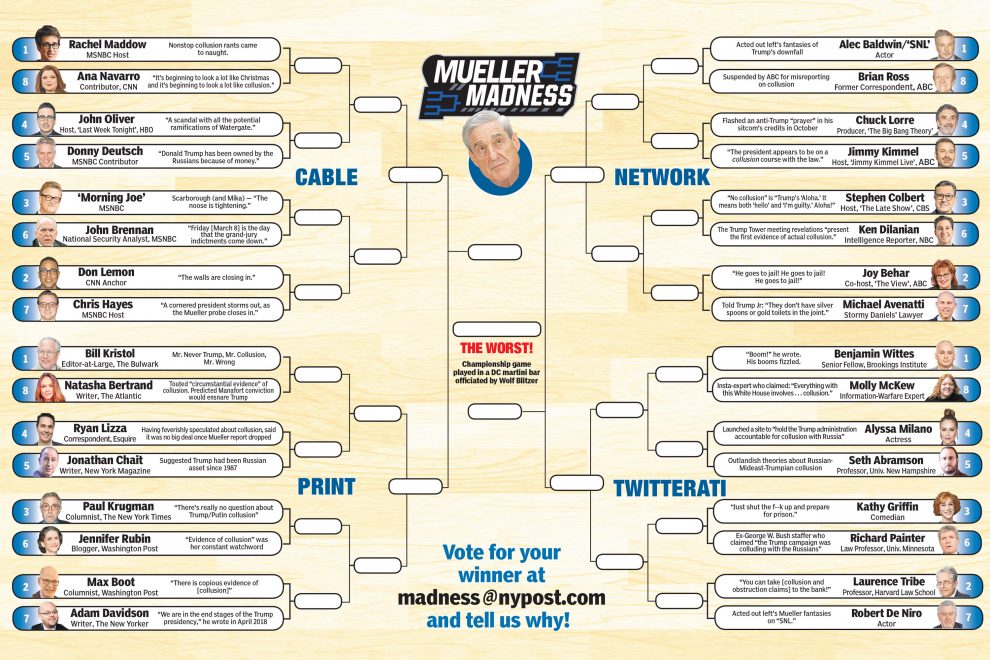 Special counsel Robert Mueller has definitively put to rest the collusion theory of President Trump’s election. That’s not a little embarrassing for the many journalists, talking heads, celebrities and instant experts who spent more than two years furiously speculating about Moscow “pee-pee” tapes, treasonous rendezvous and the president’s imminent arrest.

The president’s haters no doubt wish to memory-hole collusion and move on to the next anti-Trump theory. But not so fast: We want to laurel the punditry “champion” — the one who peddled the most nonsensical nonsense, the wildest inanities, the weirdest theories and unsubstantiated stories.

That’s where your brackets come in.

Our contenders are divided into four groups (not unlike NCAA conferences): the print journalists, the cable TV talkers, the Twitterati and the network news reporters and “analysts.” And the brackets are seeded, with the most visible and influential figures contending against the lesser-known.

In the Print category, the top seed is the never-Trump honcho Bill Kristol, who in August predicted that “Mueller will find there was collusion between Trump associates and Putin operatives; that Trump knew about it; and that Trump sought to cover it up and obstruct its investigation.” Or not.

Pick your brackets — no, not for March Madness. This is Collusion Madness!

Kristol is closely followed by The Washington Post’s Max Boot, who in July wrote, “President Trump’s mantra is ‘no collusion,’ something he says as if sheer, mind-numbing repetition can make it true.” The Mueller probe reached precisely that conclusion — no collusion — and if anyone was wish-casting, it was Boot.

In the Cable category, our top seed is MSNBC’s Rachel Maddow, in recognition of her seemingly interminable rants about the Kremlin not only electing Trump — with Trumpian “collusion,” of course — but practically running the US government. The second spot goes to her colleague Joe Scarborough, who likewise predicted Trump’s downfall at Mueller’s hands — right until the moment the special counsel shattered the fantasy.

Top among the Twitterati is Benjamin Wittes. The Brookings Institution fellow basked in the media glow that attended his Twitter predictions of Trump’s toppling. “Boom!” he would often tweet after news broke, with accompanying videos of cannons going off. A “Boom!” for BuzzFeed’s discredited story about Trump directing his ex-lawyer Michael Cohen to lie to Congress. And another “Boom!” for Cohen’s own instantly discredited testimony before Congress. And many others of the kind. The cannonballs all landed with a thud.

Wittes is followed, in the second spot, by Harvard Law Professor Laurence Tribe, who traded his stellar academic reputation for anti-Trump crankery. In July 2017, he tweeted that when senior Democrats say, “There is evidence of both collusion and obstruction, you can take that to the bank. Trump beware!” But Tribes’ collusion checks bounced.

Finally, there are the Network collusion peddlers. The top seed is Alec Baldwin. Baldwin’s cringey impersonations of a clueless, jail-bound Trump revived his battered career and kept hope alive for liberals and Trump haters across the land. Will he reprise the role now that Trump isn’t heading for jail or impeachment?

The second seed goes to Joy Behar, who confidently predicted that Trump is “going to end up in prison.” The live audience at “The View” cheered. They should ­demand a refund.