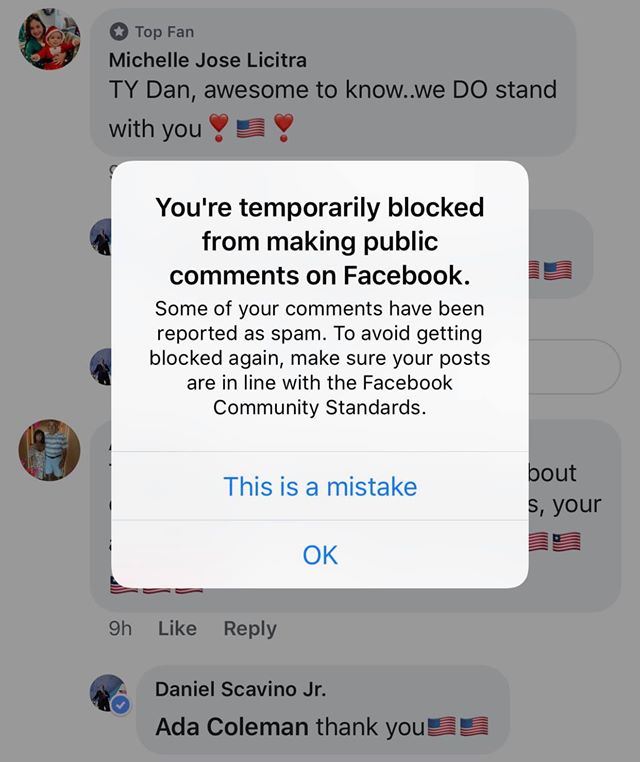 Facebook abruptly censored the account of President Trump’s chief social media guru, blocking him for simply responding to a question from a reader.

Dan Scavino Jr. said on Facebook that his page was blocked without notice.

“AMAZING. WHY ARE YOU STOPPING ME from replying to comments followers have left me – on my own Facebook Page!!?? People have the right to know. Why are you silencing me??? Please LMK! Thanks,” he wrote today.

He screengrabbed the notice that read: “You’re temporarily blocked from making public comments on Facebook.” It cited “spam” but gave no examples.

Scavino is responsible for several of the president’s and White House’s social media accounts. He has been with the president for years.

His accounts have a tremendous following, so a block on Facebook has a big reach. Already there are over 750 comments on his page, including:

“Cory Critser Dan Scavino Daniel Scavino Jr. … I think it’s time for some Senate hearings with Facebook on there attempts to influence the election.”

Another said, “Taylor Chavez The president of the United States’ personal assistant is being blocked from speaking to Fans by Facebook because of what reason? Well we know the Excuse but we don’t know the reason.”

And: “Mahendra A Patel If they can block you, how can we live in this world, if they do it to me, how they gone a listened my complain ! This is TOO MUCH POWER FACEBOOK! There should be a LAW. Facebook can’t stop anybody. THEY NEED A PERMISSION FROM COURT ! Where is check and balance of POWER !”