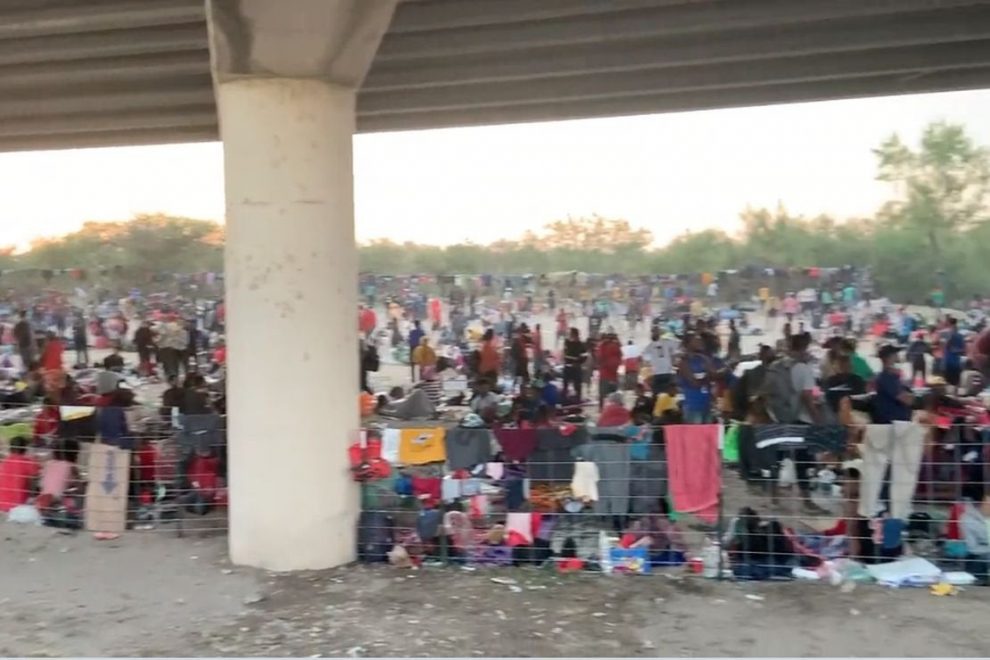 The Biden administration has a small problem at the southern border. A group of more than 10,000 Haitian refugees has gathered under a bridge waiting to be taken into custody by border authorities.

It’s an unsightly mess, to be sure. “Bad optics,” as the politicos say. Not to worry though. The American media is on the job and has done a smartly executed “about face” so they are better able to ignore the catastrophe growing at the border.

This is not, repeat not, a humanitarian crisis. This is a PR problem, say the Biden people. And addressing the problem means suppressing any news about it. After all, the rubes out in flyover country might get all worked up about tens of thousands of people showing up at our border clamoring to get in. That just won’t do. Who knows? They might even be persuaded to vote the wrong way?

So the Biden administration has taken the extraordinary step of closing the airspace around the bridge to keep the drones of the rogue news organization Fox News from showing the incredible pictures.

NEW: We’ve learned that the FAA just implemented a two week TFR (Temporary Flight Restrictions) over the international bridge in Del Rio, TX, meaning we can no longer fly our FOX drone over it to show images of the thousands of migrants. FAA says “special security reason”. pic.twitter.com/aJrjAPO2Pz

“I just want to point out, Fox News has been at the border for the better part of seven months now,” Melugin told Tucker Carlson on Thursday. “We’ve been using the drone the entire time. It’s never been an issue. All of a sudden, the last 24 hours, we start showing these images at this bridge and a TFR goes up. We can no longer fly.”

Senator Ted Cruz, who visited the bridge on Thursday, was outraged. “The drone footage started this morning, and people across the country were horrified, and I guess the political operatives at the Biden White House saw that and decided the last thing they want is Fox News actually reporting on what’s happening down here,” he told Sean Hannity. He said it was “the most horrific thing I’ve ever seen. Right now, as we’re speaking, there are 10,503 people under that bridge. It is packed in as a mass of humanity. The scope of it, until you see it … it just goes on and on and on. Infants, little children, people struggling enormously.”

BREAKING: Our drone is back over the international bridge in Del Rio, TX. Per source, the number of migrants waiting to be processed has now swelled to approx 8,200. It was 4,000 yesterday AM. Doubled in one day. BP overwhelmed, & I’m told situation is “out of control” @FoxNews pic.twitter.com/ThJJJ0JWCT

The fact is, you just don’t understand. You are too stupid and simple-minded to grasp the idea that what’s happening at the border is a direct result of Donald Trump’s shameful, unAmerican policy of trying to secure the border.

You should listen to all the smart people who are telling you to open your heart, open your mind, and open your wallet — very, very, wide — to accommodate all these wonderful newcomers. Sure some of them will be violent criminals, gangbangers, drug runners, child traffickers, and rapists. They may even make friends with some recently emboldened jihadist terrorists who would love to come to America to blow people up.

But that’s the price we pay for the world looking at us admiringly and saying nice things about us. And, of course, those who believe that anyone and everyone should be allowed to come into America and be given a place to live, taken care of by the super generous American people, and educated so they can get a good job will be seen as superior moral human beings by the world — especially European elites.

But first, we have to pull the wool over the eyes of stupid people like you because you just don’t understand.