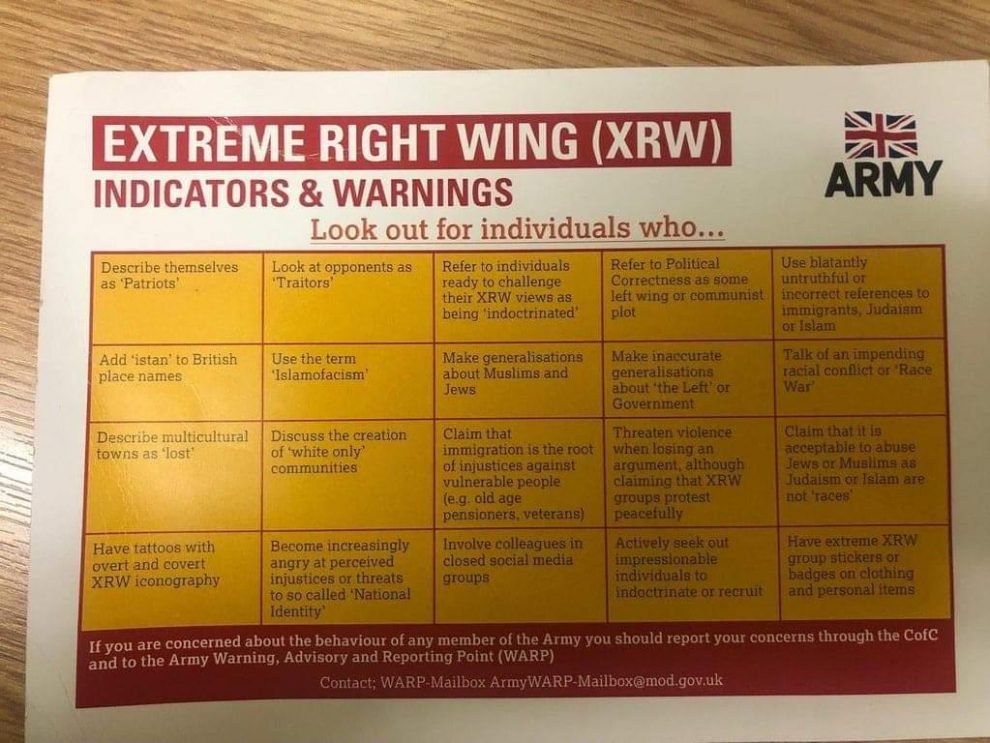 Soldiers describing themselves as “patriots” or using words such as “Islamofascism” or “traitors” could be a sign they are right-wing extremists, according to a leaked document from the British army.

Originally written in 2017, the leaflet “Extreme Right Wing (XRW) Indicators & Warnings” was sent to senior defence staff to “educate Chains of Command on the indicators and warnings of personnel who may harbour extremist views”.

Amongst the two-dozen thoughts and expressions listed, the leaflet advised recipients to “look out” for soldiers who: “Describe themselves as ‘patriots’”; “Add ‘istan’ to British place names”; “Use the term ‘Islamofascism’”; “Involve colleagues in closed social media groups”; “Refer to Political Correctness as some kind of left wing or Communist plot”; or who “Make inaccurate generalisations about ‘the Left’ or Government”.

The Ministry of Defence confirmed that the document obtained by the MailOnline was genuine, with a spokesman saying: “The values of our armed forces and the nation they serve are totally incompatible with extremist views. We have robust measures in place to ensure those exhibiting these views are not permitted to serve.

“Exhibiting one or two of these in no way suggests someone is an extremist, and the card does not suggest that all patriots are extremists.

“Through the Government’s counter terrorism and counter extremism strategies (PREVENT) the MOD takes a comprehensive approach to tackling all forms of extremism and terrorism.”

The document was produced after the 2017 arrest of four soldiers accused of links with the proscribed National Action group.

Last year, the British army was criticised for its perceived heavy-handed approach after it threatened to investigate a group of young soldiers who posed for a photograph, later published on social media, with right-wing activist and citizen journalist Tommy Robinson.

The army released a statement saying: “Far-right ideology is completely at odds with the values and ethos of the armed forces,” before saying that any military personnel “in breach of the army’s values and standards will face administrative action”.

The army had launched a series of advertisements attempting to attract recruits from the Muslim and LGBT communities and banish its macho image, with one ad showing soldiers stopping in the middle of a patrol to allow a Muslim colleague to pray, while others expressed that you can be “gay” or “emotional” in the army.

According to the briefing note, senior military figures had become “increasingly frustrated by the perceived negative impact that serving personnel are having on this campaign” and that anyone who expressed “negative opinions” about the ads would be “dealt with under disciplinary or administrative action as appropriate”.

See also  Saudi Arabia Humiliates Joe Biden With Major Oil Announcement
→ What are your thoughts? ←
Scroll down to leave a comment: