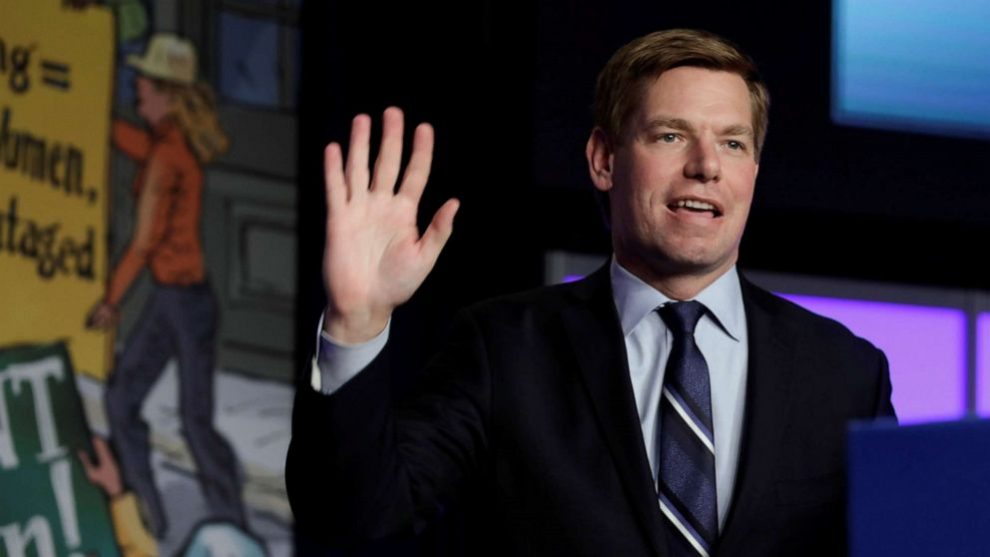 Democratic presidential candidate Eric Swalwell has been roasted after stumbling over his knowledge of the Constitution in a bid to score political points.

Swalwell, a California lawmaker who launched his bid to become the president last month, has been struggling to get a footing in the crowded Democratic primary, with 19 other Democrats overshadowing him in both the money raised and policy ideas.

But the Congressman remains unabated and has repeatedly courted progressives as his supporters, promising to select a woman as his running mate because he’s a “white man” who knows “where I can’t speak to someone else’s experience.”

On Tuesday, Swalwell ramped up the effort, issuing a tweet reading: “Do you know how many times the word ‘Woman’ is mentioned in the Constitution? Zero.”

Do you know how many times the word "Woman" is mentioned in the Constitution?

That is unacceptable. Women must be equally represented and equally protected. #ERANow

“That is unacceptable. Women must be equally represented and equally protected,” he added, advocating for the Equal Right Amendment, a suggested amendment to the Constitution that would guarantee equal legal rights to everyone no matter their sex.

Swalwell’s tweet shortly caused a backlash after many pointed that the word “man” also doesn’t appear in the Constitution.

“Do you know how many times the word ‘Man’ is mentioned in the Constitution? Zero,” fired back the co-founder of the Federalist. “There’s dumb and then there’s ‘can’t read or use CTRL+F before tweeting’ dumb.”

Do you know how many times the word "Man" is mentioned in the Constitution?

There's dumb and then there's "can't read or use CTRL+F before tweeting" dumb. https://t.co/Dl9KwzrCGW

“As a woman I find this so insulting, Eric. You must really think we’re stupid to try and sell this ridiculous rhetoric,” another Twitter user wrote.

“It gets exhausting to be constantly told by men what an oppressed victim I am,” seconded writer Kelsey Bolar.

Heritage Foundation’s Amy Swearer meanwhile pointed out that the “The words ‘people,’ ‘person,’ and ‘citizens’ are used dozens of times, and the last time I checked women are all three of those things.”

She added: “It’s patronizing (and worse, dehumanizing) to suggest that we’re not equally people or citizens.”

The words "people," "person," and "citizens" are used dozens of times, and the last time I checked women are all three of those things. It's patronizing (and worse, dehumanizing) to suggest that we're not equally people or citizens. https://t.co/DmiOiCffHS

But this isn’t the first time the Democrat has been mocked for things he said and shared on social media. Last year, Swalwell said the U.S. government would use its nuclear weapons in a hypothetical war against Second Amendment supporters refusing to give up their firearms.

His outlandish comment came after a gun-rights advocate pointed out that he once called for gun owners to surrender their assault weapons.

“So basically @RepSwalwell wants a war. Because that’s what you would get. You’re outta your f—— mind if you think I’ll give up my rights and give the [government] all the power,” Joe Biggs tweeted at Swalwell.

And it would be a short war my friend. The government has nukes. Too many of them. But they’re legit. I’m sure if we talked we could find common ground to protect our families and communities.

This prompted Swalwell to defend himself, saying it would be a “short war” because “the government has nukes,” implying the government would use its nuclear arsenal against its own citizens.

More recently, Swalwell was ridiculed after he bravely bypassed a café inside the Trump Tower and opted out to find another coffee spot in New York City.

“It’s snowing in New York,” he wrote in a tweet. “I need coffee. The closest cafe is inside Trump Tower. This is me walking to an alternative.”

It’s snowing in #NewYork. I need coffee. The closest cafe is inside Trump Tower. This is me walking to an alternative. pic.twitter.com/RLb0tAy2yT

He later admitted that he was rightfully roasted for the tweet, saying “I was rightfully skilled about that on Twitter and that’s why I love Twitter.”

“Sometimes it’s just a cathartic place to go, where you can dish it out and you better be able to take it and just move on to the next tweet.”

Still, while Swalwell’s chances in the primary remain low, earlier this week he qualified to the Democratic presidential primary debates after polling at least 1 percent in three polls.

The California Democrat has been a leading proponent of the claim that President Trump and his campaign colluded with the Russian government.

But following the Robert Mueller report that found couldn’t establish such evidence, Swalwell continued to double down and said the president acts in the interests of Russia.