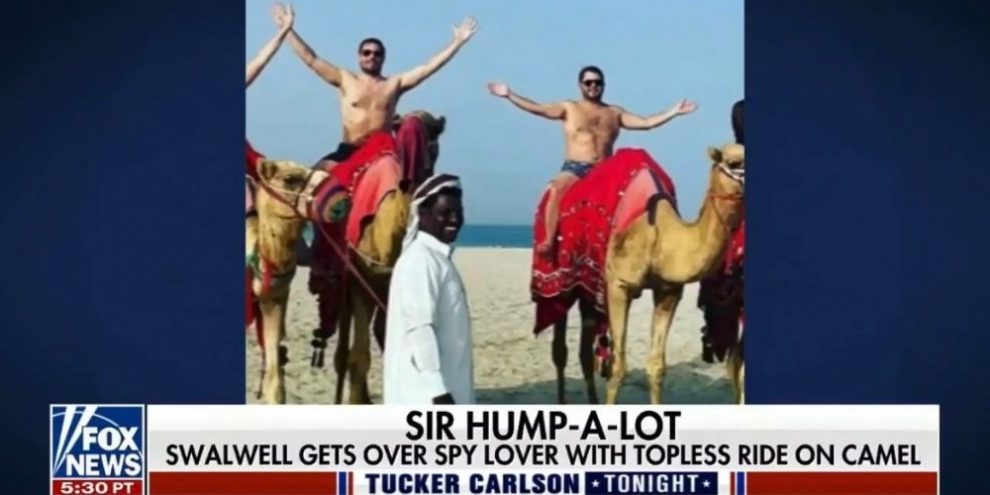 There have been several embarrassing moments in California Democratic Rep. Eric Swalwell’s career.

There was the fact that he was the first of over two dozen major candidates to drop out of the Democratic presidential primaries in 2019.

There was that time everyone thought he passed gas in the middle of a live cable news interview and he actually responded to the allegations, which he adamantly denied, declaring, “It was not me!!!!” when asked by BuzzFeed for comment.

And, of course, there’s the whole he-might-have-slept-with-a-Chinese-spy thing, which is obviously the most pertinent as the California congressman happens to be one of the top members of the House Intelligence Committee.

Now, weirdly enough, we can add that time he was photographed on a camel, shirtless, during an ethically questionable luxury trip to Qatar sponsored by a private interest group to the list of public moments that look really, really bad for Swalwell.

The swarthy camel photo was taken during a March trip to the Persian Gulf nation that was paid for by the U.S.-Qatar Business Council, a trade group, and posted to a now-deleted Instagram account belonging to the wife of fellow Democratic Rep. Ruben Gallego of Arizona, as Business Insider has discovered.

Swalwell’s wife, Brittany Watts Swalwell, joined him on the trip and appears in the photo on her own camel, as do Gallego and his then-fiancé, Sydney Barron Gallego.

While Eric Swalwell was scolding people for not following COVID rules he was taking special-interest funded trips to Qatar where he was maskless (and shirtless) riding camels. https://t.co/OulueU83Dh https://t.co/pzQrzcL8Sx pic.twitter.com/4iMTXqihaj

The two lawmakers and their fair ladies also happened to be maskless for the occasion, by the way, despite an outbreak of the COVID-19 virus in Qatar at the time and the Centers for Disease Control and Prevention’s recommendation at the time that even vaccinated individuals remain dutifully masked, as The Blaze noted, to say nothing of Swalwell’s own adamant insistence that Americans remain masked in their daily lives and his feuds with fellow lawmakers over masks on the House floor.

The camel ride also did not appear on any official itineraries for the Qatar trip, Business Insider reported, raising questions as to who paid for the exotic photo op in the first place.

And as unpleasant as it is that we all now have a visual image of a shirtless Swalwell on a camel (and I do apologize for that), where the funds came from to pay for the excursion is, in fact, what’s really scandalous here.

The U.S.-Qatar Business Council, the outlet noted, paid over $84,000 for the lawmakers’ visit to the country, which also included Democratic Reps. Luis Correa and Sara Jacobs of California and Republican Lisa McClain of Michigan.

On April 1, the trade group, which describes itself as being “dedicated exclusively to enhancing the bilateral business relationship between the U.S. and Qatar,” posted a photo of the U.S. contingent meeting with Qatar’s emir, Sheikh Tamim bin Hamad Al Thani.

The trip was approved by the House Ethics Committee, as congressional rules dictate trips paid for by private groups must be. While it is legal for congressmen to be whisked away on such luxury forays, the trips do often raise what Business Insider called an “ethical grey area” due to the potential for greater influence from more well-lined advocacy groups, and how money is spent is also subject to certain restrictions.

For example, House rules ban spending on entertainment for lawmakers — such as, say, a camel ride.

Now, if the Qatari trade group did not, in fact, pay for the camel ride, it’s still rather pertinent to know if perhaps the American taxpayers paid for the camel ride or any accommodations to enable the Swalwell-Gallego crew to take said excursion, such as an official security detail.

So far, neither the congressmen’s offices nor the U.S.-Qatar Business Council has responded to requests for comment from Business Insider to clarify any of these important details about Swalwell and his shirtless camel ride.

It must be noted that Swalwell also never responded to any requests from Business Insider to clarify whether he had had a sexual relationship with alleged spy Christine Fang, and his office declined to participate in the Axios story that originally revealed his connection with the political operative who embedded herself in American politics between 2012 and 2015.

According to Axios’ explosive December 2020 story, Swalwell was alerted by the FBI that it had been looking at Fang and her suspected ties to China.

Fang, who helped fundraise for Swalwell’s re-election campaign in 2014 and managed to help get at least one intern placed in his office as he was serving as a Dublin, California, councilman, was known to have had sexual relationships with at least two Midwestern mayors.

While Axios’ report did not allege that Swalwell had sex with Fang, when Business Insider contacted him to comment on accusations from Fox News’ Tucker Carlson that he also had an intimate relationship with her, he refused to say either way.

The operation targeted politicians in California & across the country.

Granted, the FBI did not believe that Fang managed to obtain any vital intelligence during her time moseying around small-time politicians when it contacted Swalwell about her suspected espionage, and it’s also unlikely that Swalwell was reviewing sensitive Intelligence Committee material while he was hamming it up for Instagram on a camel.

But, I mean, seriously. What was he even thinking?

He’s one of the top Democrats in Congress and on the House Intelligence Committee, and he’s already been hammered over ties to a suspected foreign spy.

He needs to answer for what he was doing on the darn camel and who paid for it, like yesterday, but how much can we expect when he has a history of declining to comment on the most explosive allegations made against him?

When you couple his history of reported connections to alleged spies, the vast hypocrisy on masking and evidence that he may have broken House rules for the sake of riding a dromedary in the desert, the potential for compromise and even corruption during his career far outweighs the embarrassing moments.

No wonder the on-air suspected fart is the only headline-grabbing incident for which he’s been able to provide a direct answer.