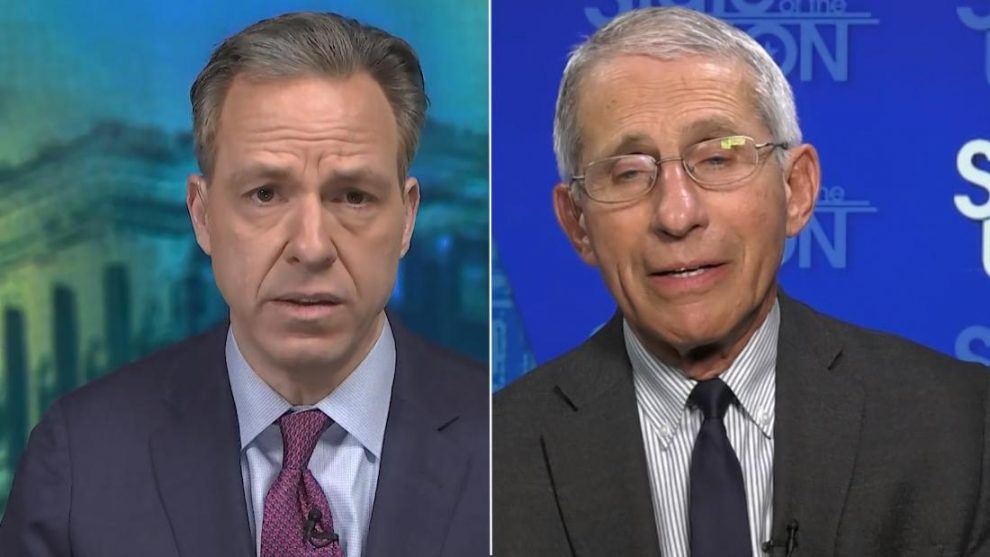 Sunday on CNN’s “State of the Union,” National Institute of Allergy and Infectious Diseases director Anthony Fauci said if President Donald Trump had listened to top officials who wanted the shutdown to begin in February, fewer lives would have been lost to the coronavirus pandemic.

Host Jake Tapper asked, “The New York Times reported yesterday that you and other top officials wanted to recommend social and physical distancing guidelines to President Trump as far back as the third week of February, but the administration didn’t announce such guidelines to the American public until March 16th, almost a month later. Why?”

Fauci said, “As I’ve said many times, we look at it from a pure health standpoint. We make a recommendation. Often the recommendation is taken. Sometimes it’s not. But it is what it is. we are where we are right now.”

Tapper said, “Do you think lives could have been saved if social distancing, physical distancing, stay-at-home measures, had started the third week of February instead of mid-March?”

Fauci said, “You know, Jake, again, it’s the what would have, what could have. It’s very difficult to go back and say that. I mean, obviously, you could logically say that if you had a process that was ongoing and you started mitigation earlier, you could have saved lives. Obviously, no one is going to deny that. But what goes into those kinds of decisions is complicated. But you’re right, I mean, obviously, if we had right from the very beginning shut everything down, it may have been a little bit different. But there was a lot of pushback about shutting things down back then.”