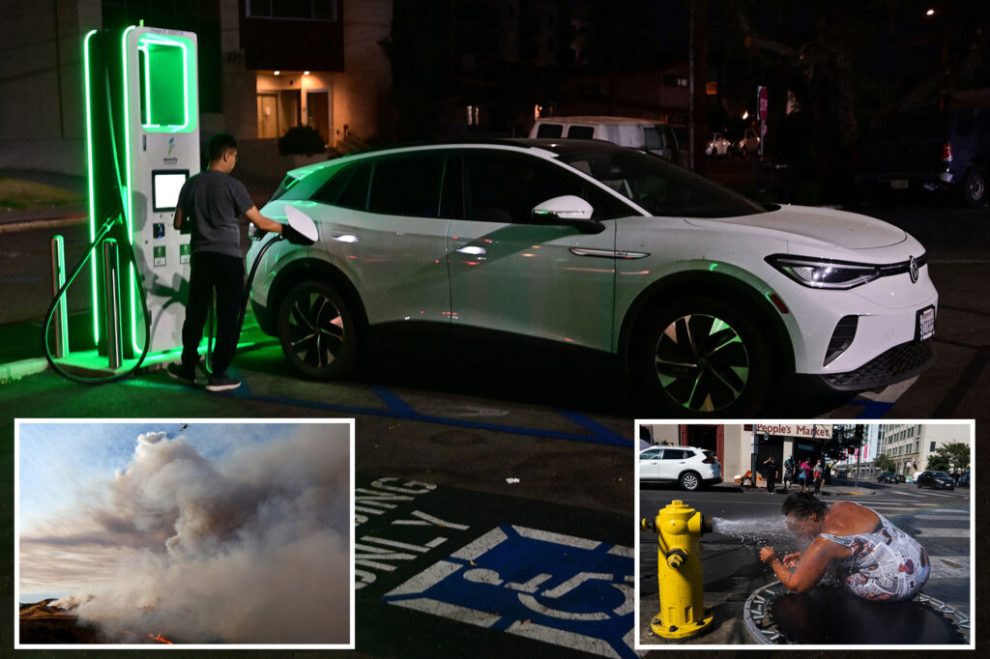 California will suffer an energy shortage and “Flex Alerts” through Labor Day due to high temperatures, and residents will be asked to conserve electricity during afternoons and evenings, which means refraining from charging electric vehicles, among other uses.

Hoping to avoid blackouts, the California Independent System Operator, which manages the state’s power grid, warned Tuesday that it probably will issue a series of Flex Alerts over the next several days. Flex Alerts are voluntary calls for conservation during the afternoon and evening hours, when energy use tends to soar. Residents will be asked to turn up their thermostats to 78 degrees or higher, avoid using dishwashers or other large appliances, and hold off on charging their electric vehicles, all during the 4-9 p.m. time frame.

The grid is expected to be under the most strain on Monday, with a projected peak load of 48,225 megawatts, [Anne Gonzales of the the California Independent System Operator] said. Peak loads on Sunday, when temperatures in parts of the Bay Area are most likely to reach triple digits, are also expected to reach more than 48,000 megawatts, according to Gonzales.

Because the weekend’s heat wave will align with high temperatures throughout the West, California’s ability to import power from neighboring states may be limited, according to the grid operator.

The warnings come just days after the state finalized regulations to ban gasoline-powered vehicles by 2035, as part of Gov. Gavin Newsom’s effort to shift the entire passenger fleet to electric vehicles, ostensibly to help fight climate change. Already, Newsom and state legislators are scrambling to save the state’s last remaining active nuclear power plant. The state has been at risk of electricity shortages for the past several years, thanks to a lack of new power plants and the unreliability of energy from wind and solar power.

Two years ago, Newsom urged Californians to “sober up” about the limitations of solar and wind power, during another late summer energy shortage that resulted in rolling blackouts across much of the state. The state has not expanded its energy sources since then, though it has improved plans for energy shortages and expanded battery capacity.

Moving to an all-electric vehicle fleet by 2035 would require the energy grid to expand its capacity by 30%, the Chronicle notes — a goal that officials say feasible within ten years.