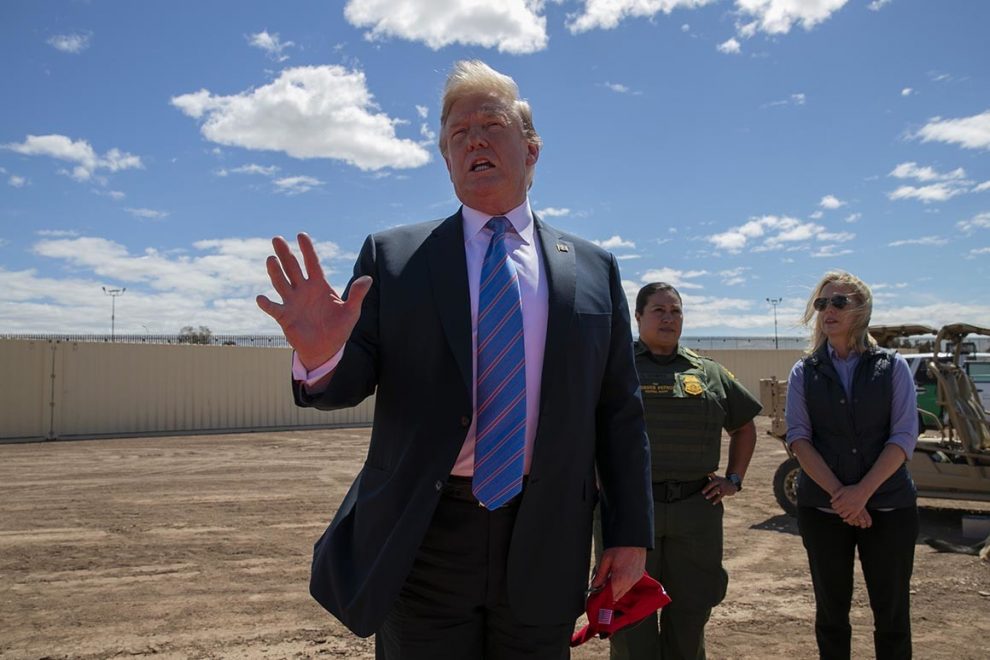 President Donald Trump made good on a promised immigration announcement Thursday night, proclaiming he will increase tariffs on Mexico.

“On June 10th, the United States will impose a 5% Tariff on all goods coming into our Country from Mexico, until such time as illegal migrants coming through Mexico, and into our Country, STOP,” President Trump wrote in a Thursday night tweet.

On June 10th, the United States will impose a 5% Tariff on all goods coming into our Country from Mexico, until such time as illegal migrants coming through Mexico, and into our Country, STOP. The Tariff will gradually increase until the Illegal Immigration problem is remedied,..

“The Tariff will gradually increase until the Illegal Immigration problem is remedied,” the president said and continued in a subsequent post, “….at which time the Tariffs will be removed. Details from the White House to follow.”

As everyone knows, the United States of America has been invaded by hundreds of thousands of people coming through Mexico and entering our country illegally.  This sustained influx of illegal aliens has profound consequences on every aspect of our national life—overwhelming our schools, overcrowding our hospitals, draining our welfare system, and causing untold amounts of crime.  Gang members, smugglers, human traffickers, and illegal drugs and narcotics of all kinds are pouring across the Southern Border and directly into our communities.  Thousands of innocent lives are taken every year as a result of this lawless chaos.  It must end NOW!

Mexico’s passive cooperation in allowing this mass incursion constitutes an emergency and extraordinary threat to the national security and economy of the United States.  Mexico has very strong immigration laws and could easily halt the illegal flow of migrants, including by returning them to their home countries.  Additionally, Mexico could quickly and easily stop illegal aliens from coming through its southern border with Guatemala.

For decades, the United States has suffered the severe and dangerous consequences of illegal immigration.  Sadly, Mexico has allowed this situation to go on for many years, growing only worse with the passage of time.  From a safety, national security, military, economic, and humanitarian standpoint, we cannot allow this grave disaster to continue.  The current state of affairs is profoundly unfair to the American taxpayer, who bears the extraordinary financial cost imposed by large-scale illegal migration.  Even worse is the terrible and preventable loss of human life.  Some of the most deadly and vicious gangs on the planet operate just across our border and terrorize innocent communities.

Mexico must step up and help solve this problem.  We welcome people who come to the United States legally, but we cannot allow our laws to be broken and our borders to be violated.  For years, Mexico has not treated us fairly—but we are now asserting our rights as a sovereign Nation.

To address the emergency at the Southern Border, I am invoking the authorities granted to me by the International Emergency Economic Powers Act.  Accordingly, starting on June 10, 2019, the United States will impose a 5 percent Tariff on all goods imported from Mexico.  If the illegal migration crisis is alleviated through effective actions taken by Mexico, to be determined in our sole discretion and judgment, the Tariffs will be removed.  If the crisis persists, however, the Tariffs will be raised to 10 percent on July 1, 2019.  Similarly, if Mexico still has not taken action to dramatically reduce or eliminate the number of illegal aliens crossing its territory into the United States, Tariffs will be increased to 15 percent on August 1, 2019, to 20 percent on September 1, 2019, and to 25 percent on October 1, 2019.  Tariffs will permanently remain at the 25 percent level unless and until Mexico substantially stops the illegal inflow of aliens coming through its territory.  Workers who come to our country through the legal admissions process, including those working on farms, ranches, and in other businesses, will be allowed easy passage.

If Mexico fails to act, Tariffs will remain at the high level, and companies located in Mexico may start moving back to the United States to make their products and goods.  Companies that relocate to the United States will not pay the Tariffs or be affected in any way.

Over the years, Mexico has made massive amounts of money in its dealings with the United States, and this includes the tremendous number of jobs leaving our country.

Should Mexico choose not to cooperate on reducing unlawful migration, the sustained imposition of Tariffs will produce a massive return of jobs back to American cities and towns.  Remember, our great country has been the “piggy bank” from which everybody wants only to TAKE.  The difference is that now we are firmly and forcefully standing up for America’s interests.

We have confidence that Mexico can and will act swiftly to help the United States stop this long-term, dangerous, and deeply unfair problem.  The United States has been very good to Mexico for many years.  We are now asking that Mexico immediately do its fair share to stop the use of its territory as a conduit for illegal immigration into our country.

The cartels and coyotes are having a greater and greater impact on the Mexican side of our Southern Border.  This is a dire threat that must be decisively eliminated.  Billions of dollars are made, and countless lives are ruined, by these ruthless and merciless criminal organizations.  Mexico must bring law and order to its side of the border.

Democrats in Congress are fully aware of this horrible situation and yet refuse to help in any way, shape, or form.  This is a total dereliction of duty.  The migrant crisis is a calamity that must now be solved—and can easily be solved—in Congress.  Our broken asylum laws, court system, catch-and-release, visa lottery, chain migration, and many other loopholes can all be promptly corrected.  When that happens, the measures being announced today can be more readily reduced or removed.

The United States is a great country that can no longer be exploited due to its foolish and irresponsible immigration laws.  For the sake of our people, and for the sake of our future, these horrendous laws must be changed now.

At the same time, Mexico cannot allow hundreds of thousands of people to pour over its land and into our country—violating the sovereign territory of the United States.  If Mexico does not take decisive measures, it will come at a significant price.

We therefore look forward to, and appreciate, the swift and effective actions that we hope Mexico will immediately install.

As President of the United States, my highest duty is the defense of the country and its citizens.  A nation without borders is not a nation at all.  I will not stand by and allow our sovereignty to be eroded, our laws to be trampled, or our borders to be disrespected anymore.

See also  Stocks Tumble into the Worst First Half in over 50 years
→ What are your thoughts? ←
Scroll down to leave a comment: