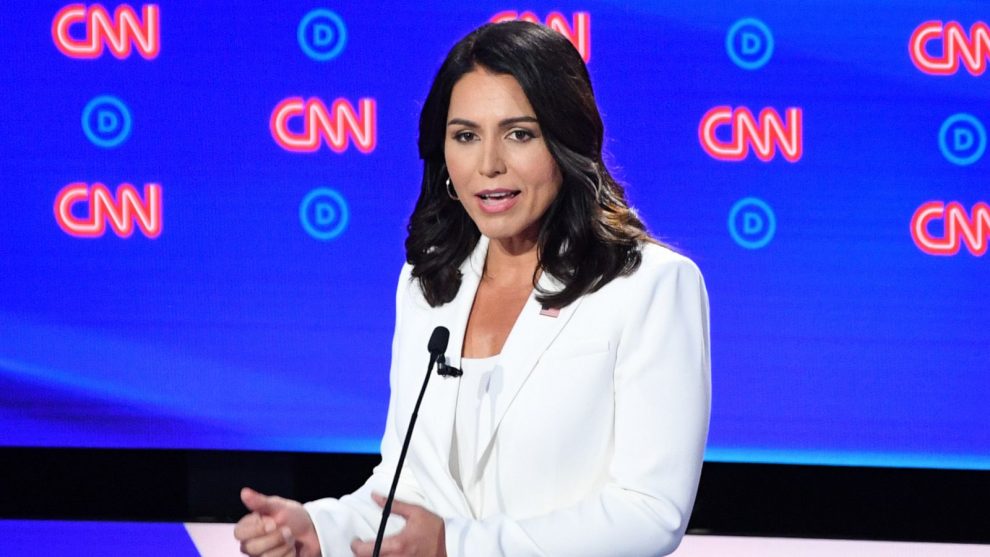 The qualifying criteria for the next Democratic debate are out, and they manage to exclude the only veteran and only woman of color left in the race: Rep. Tulsi Gabbard (D–Hawaii).

This afternoon, Politico reported that the candidates still in the running for the Democratic presidential nomination will need to have earned at least 20 percent of the delegates awarded thus far in order to participate in the March 15 debate hosted by CNN and Univision in Phoenix, Arizona.

That means that only former Vice President Joe Biden and Sen. Bernie Sanders (I–Vt.), who respectively have 48 percent and 41 percent of the delegates so far, will be on next Sunday’s stage.

Despite her strong showing in the American Samoa caucuses where she won two delegates, Gabbard still falls short of that very high threshold.

Had the Democratic National Committee stuck with its criteria for the last debate it held on February 25—which only required each candidate to have won a single delegate—Gabbard would have qualified.

DNC Communications Director Xochitl Hinojosa foreshadowed this decision on Super Tuesday, saying on Twitter that “by the time we have the March debate, almost 2,000 delegates will be allocated. The threshold will reflect where we are in the race, as it always has.”

We have two more debates– of course the threshold will go up. By the time we have the March debate, almost 2,000 delegates will be allocated. The threshold will reflect where we are in the race, as it always has.

In response to the expected rule change, Gabbard tweeted Thursday about her campaign’s foreign policy focus, and how that can’t be separated from the domestic issues that have gotten the most attention in past debates.

I welcome the opportunity to raise & discuss the foreign policy challenges we face, like the new cold war/nuclear arms race, Turkey's efforts to drag the U.S. into a war with Russia over Syria, the coronavirus, & more. Domestic policy cannot be separated from foreign policy. https://t.co/jgVxSz1huX

Biden and Sanders have sparred in the past over the former’s initial support for the Iraq War, so there is some chance that the two candidates’ contrasting foreign policy visions will be on display come the next debate.

Still, it might have been interesting to have Gabbard, an Iraq War veteran, up on stage to offer her own unique perspective on foreign policy. She’s repeatedly argued that rising tensions between the U.S., Russia, and China is putting the country on the road to nuclear war.

A Bernie-Biden smackdown will likely feature less talk of a nuclear apocalypse and a lot more bickering about health care. That’s enough to get anyone running for their fall out shelter.