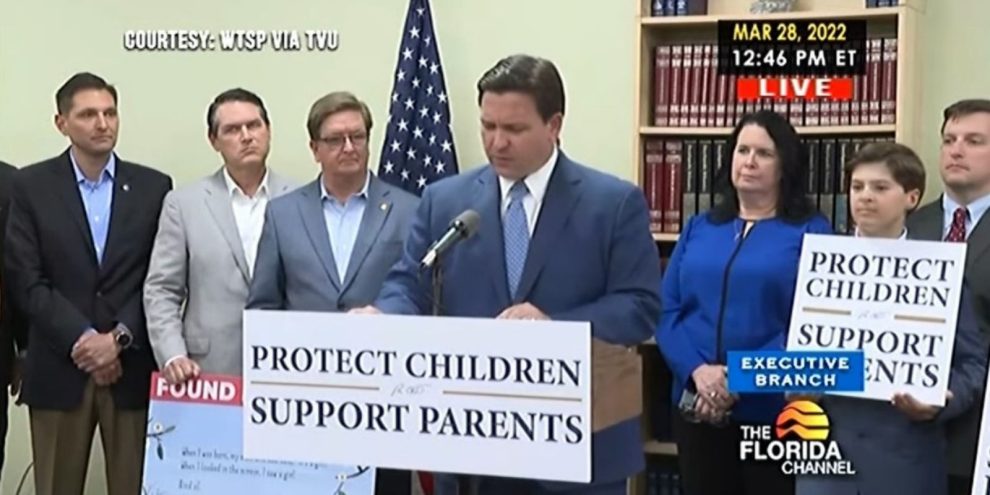 In the aftermath of Disney’s attack on Florida officials for passing a bill to strengthen parental rights, Florida Republicans are taking a new look at 55-year-old legislation that has given the company vast power to make its own rules inside Walt Disney World near Orlando.

The bill, officially named Parental Rights in Education, largely focuses on procedures to ensure that parents can be informed of any services that students receive at school.

About halfway through the bill, it says, “Classroom instruction by school personnel or third parties on sexual orientation or gender identity may not occur in kindergarten through grade 3 or in a manner that is not age-appropriate or developmentally appropriate for students in accordance with state standards.”

DeSantis said that if Disney wants to get heavily involved in politics, then perhaps it no longer deserves to be above the rules.

Disney has a ‘Diversity and inclusion manager’? How special. 🙄 My sisters & cousins had so much fun in Fort Wilderness every summer growing up. It’s sad they’re going woke.
Stay out of politics, #Disney #GowokeGobroke pic.twitter.com/7X36IGTKqn

“What I would say as a matter of first principle is I don’t support special privileges in law just because a company is powerful and they’ve been able to wield a lot of power,” DeSantis said Thursday during a news conference in West Palm Beach.

Disney threw its weight around last year in a Florida bill to curb the power of Big Tech, DeSantis said, adding: “I’m thinking to myself, ‘This is ridiculous. Honestly, it was embarrassing.”

DeSantis suggested that special treatment for Disney has evolved to the point where it needs to be reviewed and perhaps cut back.

“I think what has happened is there’s a lot of these special privileges that are not justifiable, but because Disney had held so much sway, they were able to sustain a lot of special treatment over the years,” he said.

Republican state Rep. Spencer Roach said the process of treating Disney like everybody else has already begun.

Yesterday was the 2nd meeting in a week w/fellow legislators to discuss a repeal of the 1967 Reedy Creek Improvement Act, which allows Disney to act as its own government. If Disney wants to embrace woke ideology, it seems fitting that they should be regulated by Orange County. pic.twitter.com/6sj29Gj6Wz

That legislation created the Reedy Creek Improvement District, which allows Walt Disney World — which sits on land in both Orange and Osceola counties, and two different cities — to govern itself.

Forbes described what this designation means: “Rather than local governments, Disney is in control of everything from construction zoning, building codes and fire department services to controlling its own electricity, roads and water, meaning if the law is repealed, Disney will now have to get government approval for decisions about its operations — which might be harder or take longer to get.”

So, obviously, Disney is very happy with its independent status and would like it to continue.

Speaking at a news conference in Ponte Vedra Beach, Florida, on Thursday, DeSantis said that given Disney’s promise to fight the Parental Rights in Education law, state legislators might consider the repeal of Reedy Creek, WKMG reported.

He then mentioned another “special favor” granted to Disney by the state Legislature last year.

The Social Media Platforms bill, which the governor signed on May 24, 2021, banned Big Tech companies from censorship by allowing individuals to sue them. Shortly before the bill was passed, a lawmaker added language that exempted operators of theme parks.

“At the 11th hour,” DeSantis said, “the Legislature slips in a provision to that law that said, if you operate a theme park, it doesn’t apply to you. And that was meant solely to protect Disney. And I opposed that when it happened.”

The governor continued, “I had to make a decision. Do I veto? Do I throw the baby out with the bathwater and veto the entire bill? … I didn’t think it was worth doing. But if you look at like a provision like that, repeal that, that shouldn’t be there anyways.”

He said it was “the one time [Disney] got something” during his time as governor.

“I think that’s one of the reasons they’ve got so far over their skis on this on this parental rights stuff, because I think they’re used to having their way and they’re not used to having people that will stand in their way and say, ‘Actually, the state of Florida is going to be governed by the best interest of the people in Florida,’” DeSantis said.

“You know, we’re certainly not going to bend a knee to woke executives in California. That is not the way the state’s going to be run,” he said.

To be sure, Florida has benefited enormously from Disney World’s presence, but that doesn’t mean its management team can start calling the shots in the state.

The company certainly doesn’t have the right to threaten the governor and Legislature. DeSantis is right on the money here. Why would Florida go above and beyond to give Disney an exemption to a law when it’s so clearly acting against the interests of the state’s children?

Disney is entrenched in Florida. Stripping the company of its “special privileges” would have a serious impact — and shareholders will not be too happy if the company’s anti-family activism starts to diminish their returns.