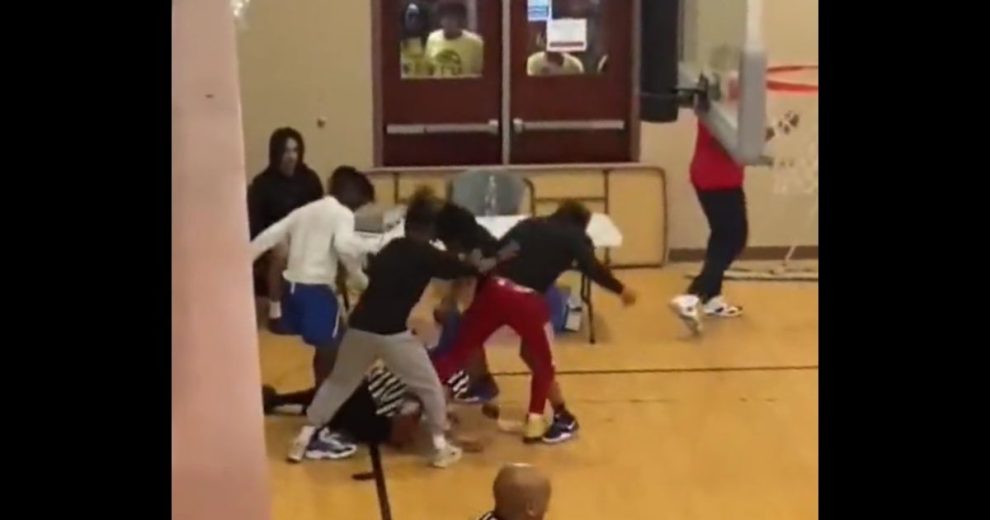 An incident at a Georgia youth basketball game can be entered into evidence if there was doubt about the erosion of authority at all levels of American society.

On Sunday, players and fans ganged up on a referee during a youth basketball game that was played at Stronghold Christian Church in Lithonia, Georgia.

In a video shared on social media, the referee was chased around the court and then corned until he went down as players and fans — both youth and adults — hit and kicked him.

None of the bystanders — including two other referees — stepped in to help him.

Y'all these bad ahh kids got off on the referee 😐 Why the other refs ain't help tho pic.twitter.com/FGXhxqFDer

Kenneth Tarver, one of the organizers of the basketball tournament at which the attack took place, said the referee who was attacked needed 30 stitches, according to TMZ Sports.

He said the team of eighth-graders that launched the attack has been banned from future tournaments that he operates.

The church said that it only hosted the event.

“It is truly unfortunate about the turn of events that took place during the basketball game held at our facility this weekend,” Senior Pastor Benjamin Gaither said in a statement, according to WXIA-TV in Atlanta.

“We open our doors to serve our community and our goal is to provide an atmosphere conducive for enjoyment, enrichment, etc.,” Gaither said. “While we can not control people, it is our hope and prayer that those who enter our facility will conduct themselves in the best manner.

“Our prayers go out to all those involved in this current situation.”

Police were investigating the incident, according to WSB-TV in Atlanta.

Youth basketball coach Paris Cherry said he “was appalled” at the violence shown in the video.

“It was a very scary video,” he said, according to WSB. “To see the adults instigate and then the kids follow up to the point where it was the kids who chased down the referee at the end of the video, it’s just disgusting. And it seems like there wasn’t any adult trying to break it up.”

Although the video of the attack showed a particularly brutal assault, Ernie Yarborough, assistant executive director for the Georgia High School Association, said assaults of all kinds are becoming far too common.

“It’s becoming too commonplace now that we’re having contest officials be assaulted by parents, players, coaches,” he said. “It was very disturbing for me to see that.”

“It is an issue that we see more and more, especially in the last four or five years,” Yarborough said. “What’s happening in our society to cause people to react like that over a game of basketball?

“If you don’t know how to handle failure, then you’re going to have a tough time in your regular life.”

Yarborough said that without referees, there are no games.