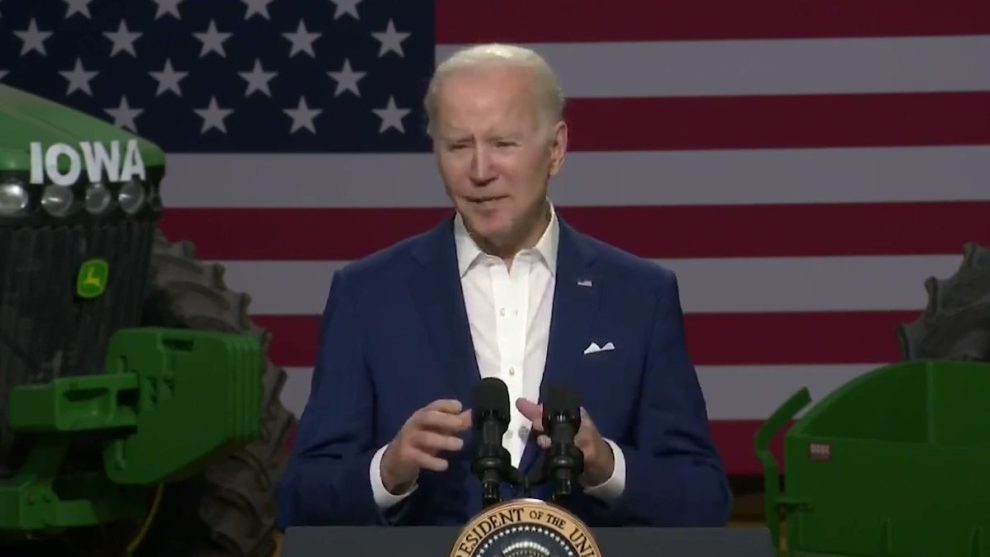 A flying object collided with President Joe Biden as he spoke on energy policy at an Iowa ethanol plant on Tuesday.

Americans questioned what the mysterious white substances could’ve been, with most spectators eventually coming to a likely conclusion.

It appears that a bird delivered a “dive bomb” of sorts directly on the shoulder of the President of the United States.

Did a bird just poop on Joe Biden? pic.twitter.com/p2Ywv8CbRU

Biden was only slightly fazed by the aerial attack, continuing on with his speech after a glance at his left shoulder.

The venue in which Biden gave his speech, POET Bioprocessing in Menlo, Iowa, was an indoor space.

Here’s an inside look at the setup inside Poet Bioprocessing in Menlo, Iowa ahead of @POTUS remarks pic.twitter.com/vL5axZqYp4

However, the building was big enough that a brave aviator could infiltrate the defenses to deliver his cargo.

In his speech, Biden delivered a series of excuses for dismal gas prices in the country.

He also announced a new policy to allow the sale of higher-ethanol gas this summer, according to The New York Times. However, the gimmick is unlikely to save American drivers more than ten cents a gallon at the pump.

With the President unable or unwilling to provide a policy solution to exorbitant fuel prices, the Biden administration has taken to using a “Putin price hike” excuse for the situation.

Putin’s invasion of Ukraine has driven up gas prices and food prices all over the world. 70% of the increase in prices in March came from the Putin Price Hike.

I’m doing everything I can to bring down prices and address the Putin Price Hike.

In a questionable twist, none of Biden’s handlers helped him to wipe off the white bird strike from his navy blue suit.

The ordinance was still visible on his shoulder when he wrapped his speech and mingled with plant workers.