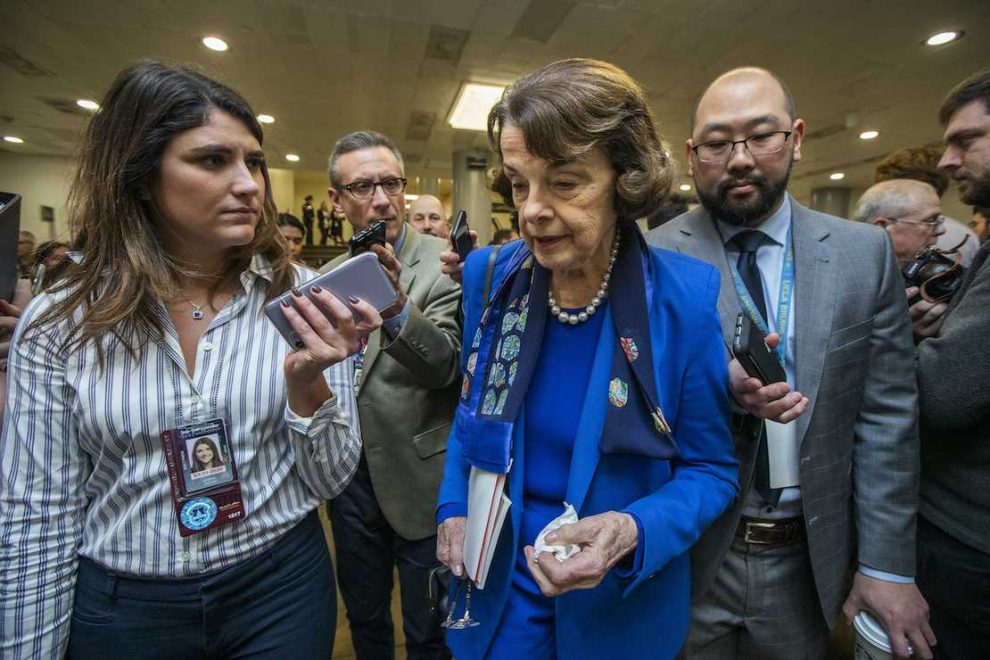 We’ve written before about how rumors have been swirling since the looming September 2020 confirmation battle over Amy Coney Barrett’s nomination to the Supreme Court that Sen. Dianne Feinstein’s (D-Calif.) mental health has been steadily deteriorating, with some in the Democratic Caucus questioning her ability to continue to serve in the office she’s held since 1992.

A story filed by Politico prior to Barrett’s eventual nomination and confirmation hearings stated that there was “widespread concern” on the Democratic side amongst Senators and aides alike over whether or not she was capable of performing her duties, which at the time included being the ranking member on the Senate Judiciary Committee. The report also noted that Feinstein “sometimes gets confused by reporters’ questions, or will offer different answers to the same question depending on where or when she’s asked.”

As it turns out, that is exactly what happened during a recent exchange between Feinstein and a journalist from Business Insider. From the way it sounded, the 89-year-old Senator was so out of sorts that an aide had to step in and correct her multiple times:

Dianne Feinstein (89) was asked by a reporter about whether she’ll seek to become President Pro Tempore of the Senate, the person third line to the presidency.

This is how it went 😂 pic.twitter.com/lj6dErDJoY

When I wrote “alarming” in the headline, I wasn’t kidding.

Even the liberally biased San Francisco Chronicle has periodically written about the issue of Feinstein’s mental health, reporting earlier this year that “[f]our U.S. senators, including three Democrats, as well as three former Feinstein staffers and the California Democratic member of Congress [they spoke to] told The Chronicle in recent interviews that her memory is rapidly deteriorating.”

Sen. Majority Leader Chuck Schumer (D-N.Y.) was asked about the Chronicle story back in April, and the answer he gave when asked if he had confidence in her ability to competently serve out her term only further fueled speculation that all the talk about Feinstein’s alleged declining mental acuity was true.

“I’ve had a good number of discussions with Sen. Feinstein, but I’m keeping them to myself,” Schumer stated before quickly pivoting to another reporter in hopes of changing the line of questioning.

Schumer’s answer was a reminder to folks that sometimes it’s what they *don’t* say that says it all. In this case, Schumer couldn’t have been any louder if he’d shouted an announcement about Feinstein through a bullhorn.

As I’ve said before, this isn’t a laughing matter. Obviously, it is a sensitive subject but it’s one that must be addressed soon if the reports are accurate. Because if there’s anything that’s been reaffirmed from President Joe Biden’s time in office, it’s that people whose cognitive abilities have declined should not be holding positions of power.

There’s just too much that can go (and has gone) wrong when they do. And I sincerely mean that with all due respect. Maybe age limits should be on the table going forward? I don’t know. All I know is that we’re seeing a lot more of these types of issues from people in positions of great power and authority, and it’s deeply troubling.

I mean if DiFi runs for reelection in 2024 she will be in her early 90s. Think about it.