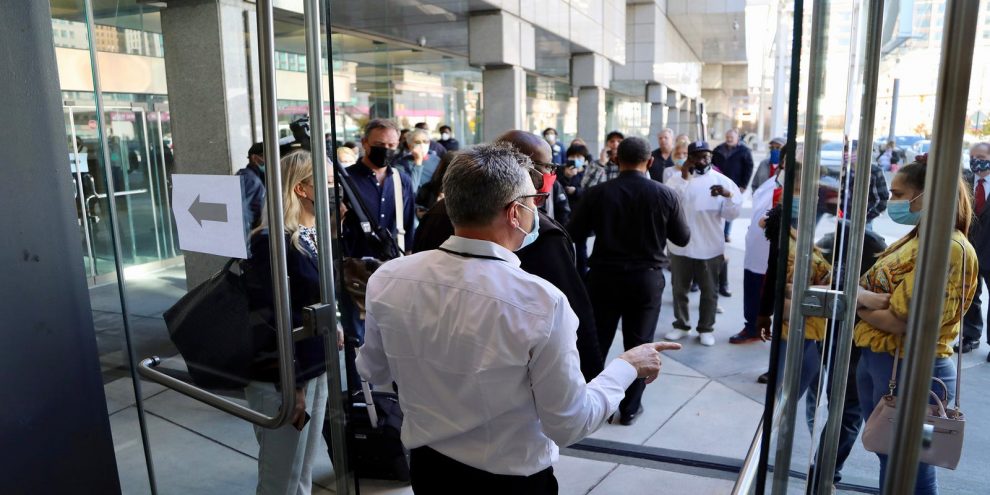 Absentee ballot counting in Detroit descended into chaos on Wednesday when hundreds of unofficial Republican observers concerned about fraud converged on the counting location.

The city of Detroit is using the TCF Center — formerly Cobo Hall — to count all of the absentee ballots in the city.

Republicans and Trump supporters grew alarmed as Trump was holding a strong lead in the state during early counting Tuesday evening, only for it to evaporate as mailed-in ballots were counted in historically Democrat areas.

Several videos posted on social media show workers attempting to restrict transparency and not allow people outside to observe what was going on inside the counting area:

The scene at Detroit’s absentee ballot counting center is growing more heated. The windows now being covered up. Allegations of violations. Sec. of State says she welcomes challenges. pic.twitter.com/oUL4A0h3Ku

Matt Finn, a Fox News producer wrote, “Some of the windows remain blocked off. I asked a few people who taped them up and why, no clear answer. A few poll challengers / workers tell us they feel there wasn’t a fair number of (Republicans and Democrats) in this room.”

The Trump campaign has filed suit, arguing they were not given access to the counting process and were thus demanding the vote be stopped until adequate accommodations were granted.

A worker used large pieces of cardboard to cover the windows, preventing those outside from seeing what was going on. Other workers used pizza boxes to block the door windows as some chanted “stop the vote” outside the venue:

As tension grew, a representative of the Detroit health department sought to clear the lobby of the counting area, further angering the watchers:

#BREAKING: Large, animated crush of “stop the count” protestors trying to push their way into TCF hall in #Detroit where ballots are being counted.

They’re being blocked by guards at the door.

Secretary of State Jocelyn Benson previously said vote counting could take until Friday. On Wednesday, she estimated it could be complete tonight.

With 99 percent of the vote counted, Biden leads Trump by more than 60,000 votes, according to the Detroit News.