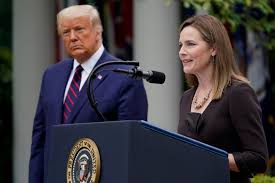 With Barrett forming a 6-3 conservative majority, many contend that the 1973 landmark Roe v. Wade ruling – granting a woman’s right to terminate a pregnancy – could be undermined or overturned.

So where does Barrett stand on the issue of abortion?

For the pro-choice camp, the biggest anxieties stem from a 2006 newspaper advertisement that she did not submit to the Senate Judiciary Committee.

Taken out by the St. Joseph County Right to Life group in Indiana, the two-page ad – signed by then-University of Notre Dame law professor Barrett and her husband in addition to hundreds of other residents – annotated that life beings at “fertilization” and opposed the concept of “abortion on demand.”

“It’s time to put an end to the barbaric legacy of Roe v. Wade,” the ad read. “And restore law that protects the lives of unborn children.”

On Tuesday, Senate Judiciary Committee Democrats – led by Sen. Dianne Feinstein of California – sent a letter to the Justice Department, seeking an explanation as to why the 14-year-old advertisement was not submitted to the committee as part of the nominee’s questionnaire.

But just prior to becoming a federal judge (she currently sits on the 7th Circuit Court of Appeals, after being picked by President Trump in early 2017), Barrett told an audience at Jacksonville University that while she did not think there was the impetus for Roe to be overturned, access to abortion could be restricted.

Democrats next week are also likely to press down on Barrett’s 2013 essay on the ruling, as a Notre Dame professor.

“If anything, the public response to controversial cases like Roe reflects a public rejection of the proposition that stare decisis can declare a permanent victor in a divisive constitutional struggle rather than desire that precedent remains forever unchanging,” she wrote.

That same year, a Notre Dame Magazine article drew on a lecture given by Barrett, underscoring that she “spoke both to her own conviction that life begins at conception” and to the “‘high price of pregnancy’ and ‘burdens of parenthood’ that especially confront women.”

Barrett belonged to the Notre Dame chapter of a pro-life club called University Faculty for Life. In 2016, while the professor was still a member, the group adopted a resolution that “every human being, from the moment of conception and until natural death, must be cherished and protected, and must never be intentionally killed.”

The resolution was written as a rebuff of the university opting to award Democrat Joe Biden a medal, stressing that the then-vice president “has for decades conspicuously rejected Church teaching about life.”

“He has rejected it repeatedly and consistently in the context of abortion, where (he has been quoted as saying) he would not want to ‘impose’ this teaching upon a woman and her doctor,” the resolution continued.

As a federal judge, Barrett has dealt with just a few cases pertaining to the abortion issue.

A three-judge panel voided a request from Indiana, asking the full appeals court to re-evaluate only the state’s provision on fetal remains and not the provisions concerned with prohibiting abortion on the grounds of race, disability, or sex of the fetus.

Barrett sided with her fellow judge’s dissent, which expressed that the law’s provision barring abortion on the basis of race, disability or sex of the fetus was a “eugenics statute,” and that there is a “difference between ‘I don’t want a child’ and ‘I want a child, but only a male, or ‘I want only children whose genes predict success in life.'” 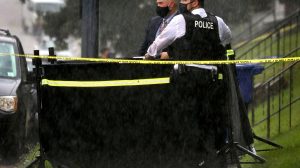 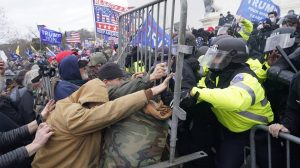 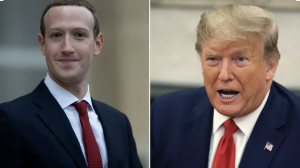