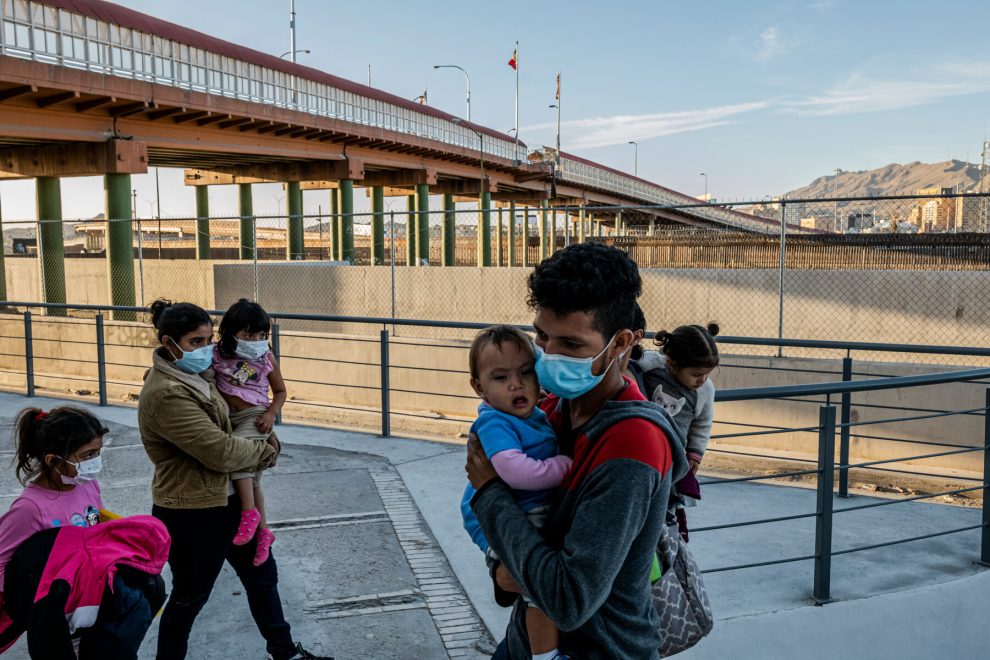 Democrats and their business-backed allies are hinting they want the Republicans to okay more legal migration in exchange for keeping border barriers against illegal migration.

“I don’t think there’s any incentive for the Republicans to deal,” amid Democratic threats to lift the Title 42 border barrier against migration, responded Jessica Vaughan, the policy studies director at the Center for Immigration Studies.

“The Republicans know enough to insist on a clean extension of Title 42, not one encumbered with the Democrats’ wish list items,” she said, adding:

The Democrats might think that they could get something in exchange for allowing a Title 42 extension. But I think it would be a miscalculation. I don’t think it’s a good look for them to be trying to put a price on Title 42 extension when most of the public wants it extended. That would be seen as obstructing or complicating the continuation of Title 42.

Some Democratic supporters indicate they have little leverage. “Democrats are terrified that ending Title 42 enforcement will produce an all-out border crisis just in time for the midterm elections,” Democratic strategist William Galston wrote in the April 19 Wall Street Journal.

“The deadline for the lifting of Title 42 is a month away [May 23] — but the Biden administration is under enormous pressure to stall the timeline amid a Democratic mutiny,” TheHill.com reported on April 22.

Yet some Republicans are signaling they will work with Democrats to pass a law that would convert the Title 42 illegal inflow into more of the legal immigration that benefits business groups and donors at the expense of ordinary voters:

Still, the GOP hints about agreeing to a deal may only be rhetorical concessions to donors and Democrats and are not intended to result in any deal.

The Democratic hints are thrown out whenever they are asked about their plan to open the borders in May by lifting the Title 42 border barrier against epidemics.

“Immigration in our country is broken,” Jennifer Psaki said on April 20 when she was asked about the administration’s plan to remove the Title 42 barrier. She continued:

There are a range of ideas out there in Congress — Democrats, Republicans, others — some who support a delay of Title 42 implementation, some who strongly oppose it. And there are a range of other ideas of reforming our immigration system. This would all require congressional action. We’re happy to have that conversation with them.

“A long-term solution can only come from comprehensive legislation that brings lasting reform to a fundamentally broken system,” border chief Alejandro Mayorkas said on April 1 as he announced that the last elements of the Title 42 barrier would be removed by May 23.

“On the president’s first day in office, he sent an immigration bill to Congress that invests in smart solutions, effectively manages the border, and addresses the root causes of migration,” the White House told Axios for an April 6 article on Title 42. “Those that are concerned about [the U.S.] immigration system … should pass it.”

“The president proposed comprehensive immigration reform [on] his first day in office,” Biden’s chief of staff Ron Klain said on April 7. “I haven’t seen what the Republican plan is other than to stall it.”

“Our immigration system is broken and it’s badly broken and it’s been that way for decades,” Sen. Dick Durbin (D-IL) said on April 5. “What we need to do is finally sit down together and say, what is the orderly way to do it?”

The same open borders or more legal-migration message is being pushed by business-backed groups that lobby for more foreign consumers, renters, and workers.

Right-wing Republicans who seek a return to the [Donald] Trump/[Stephen] Miller approach have filled the vacuum, leading a growing number of Democrats and reform-minded Republicans to call for Title 42 to remain in place.

[Biden needs] to engage Congress in a process that advances a first tranche of sustainable reforms needed to secure our borders and modernize our immigration system. While the time to advance reforms this year is limited, Congress is not starting from scratch.

“Ending Title 42 at the border is the right thing to do, but it is not enough,” said an April 6 post by Laura Collins, a pro-migration advocate at the George W. Bush Presidential Center. “Congress must seriously consider nimble legislative solutions to improve border security and the legal immigration system,” she added.

Vaughan is skeptical that Democrats and businesses can force the GOP to make a deal before the election.

If Democrats try to demand a price for protecting the public, “I don’t think that that would go over well with the public,” she said.

Besides, the GOP can expect gains from any debate in which the TV cameras are showing Biden’s migration into Americans’ jobs and towns, she said. “It gives the Republicans the opportunity to say ‘Look, Title 42 is a temporary tool, and what we really want is for you to enforce the actual immigration laws to disrupt this inflow,’” Vaughan said.

Some Republicans do want a deal that helps businesses, especially by providing more foreign graduates to replace U.S. graduates. “Two years ago, we had two bills on the floor that came very, very close,” Sen. Thom Tillis (R-NC) told Durbin and several other Senators on March 15. He continued:

We had a historic number of Republicans voting for a path to citizenship for the DACA population. We almost got where we needed to be on addressing some of the border security issues. Now we can, I think, dust that off and come up with something productive. I, for one, would like to this to be the Congress where we address the DACA population, that we also address some of these guest worker programs, and Green Card issues, which, to me, I learned firsthand [when] I got exposed to the H-1B process in my [prior] job at PriceWaterhouse.

I’ve tried to tell anyone who thinks that we just need to find more [American] computer scientists, more data analysts, more people with advanced degrees from the U.S. population, that they need to wake up and recognize that if we want our economy to continue to grow, if we want to continue to build on this great economy, that we’ve got to look to legal immigration as a critical part of fulfilling our workforce needs and really growing our innovation economy.

Republicans will resist the business pressure before the November election, Vaughan predicted:

Democrats might try to do something on asylum or refugees or some some way to expand or facilitate making a lot of these border projects legal, and that way they won’t mind giving in on Title 42 because they’ve got another way to [legally] let people in. But Republicans won’t fall for that. Republicans have been very clear that they want the asylum system tightened, not loosened, and [they are] not supportive of a major increase in refugees or humanitarian programs.

There’s no polling evidence that GOP voters and swing voters want legislation to accelerate the inflow of legal immigrants into Americans’ jobs, homes, and communities.

And some of the Republicans who say they want a deal are also hinting that the Title 42 issue is a political disaster for Democrats:

Since at least 1990, the D.C. establishment has extracted tens of millions of migrants and visa workers from poor countries to serve as legal or illegal workers, temporary workers, consumers, and renters for various U.S. investors and CEOs.

This economic strategy of Extraction Migration has no stopping point. It is brutal to ordinary Americans because it cuts their career opportunities, shrinks their salaries and wages, raises their housing costs, and has shoved at least ten million American men out of the labor force.

Extraction migration also distorts the economy and curbs Americans’ productivity, partly because it allows employers to use stoop labor instead of machines. Migration also reduces voters’ political clout, undermines employees’ workplace rights, and widens the regional wealth gaps between the Democrats’ coastal states and the Republicans’ Heartland and southern states.

The policy is hidden behind a wide variety of excuses and explanations, such as the claim that the U.S. is a “Nation of Immigrants” or that Americans have a duty to accept foreign refugees. But the economic strategy also kills many migrants, exploits poor people, splits foreign families, and extracts wealth from the poor home countries.

The economic policy is backed by progressives who wish to transform the U.S. from a society governed by European-origin civic culture into a progressive-led empire of competing identity groups. “We’re trying to become the first multiracial, multi-ethnic superpower in the world,” Rep. Rohit Khanna (D-CA), told the New York Times on March 21. “It will be an extraordinary achievement … we will ultimately triumph,” he insisted.

Not surprisingly, the wealth-shifting extraction migration policy is very unpopular, according to a wide variety of polls. The polls show deep and broad public opposition to labor migration and the inflow of temporary contract workers into jobs sought by young U.S. graduates.

The opposition is growing, anti-establishment, multiracial, cross-sex, non-racist, class-based, bipartisan, rational, persistent, and recognizes the solidarity that Americans owe to one another.