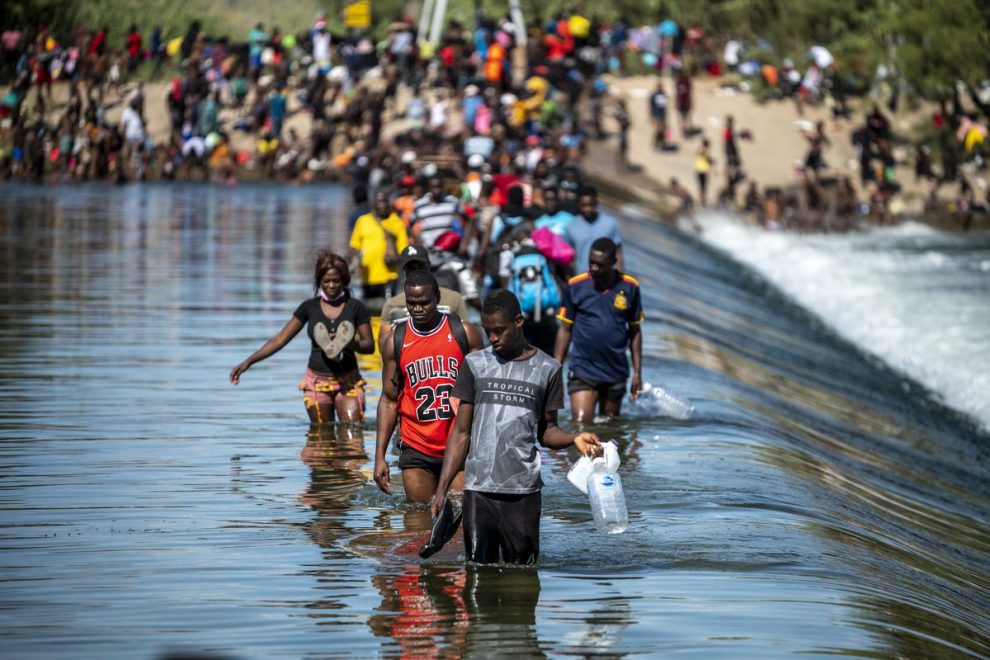 Democrats are trying to blame the GOP for the flood of wage-cutting, rent-spiking migrants that are expected to cross the southern border once President Joe Biden’s deputies lift the Title 42 border barrier in May.

“The president sent an immigration plan to Congress on his first day in office [and] We’ve asked consistently for more resources,” Biden’s chief of staff, Ron Klain, told ABC News on April 3. Many Democrats worry that the impending flood of migrants — perhaps 500,000 a month — will wash away their declining chance of victory in the November midterm elections.

Public “dissatisfaction with immigration [policy] has been driven by Republicans and they’re feeding this,” Democratic political consultant Cornell Belcher told NBC on April 3. He continued:

Not so long ago I remember when a guy named Barack Obama thought he had an immigration deal with the Gang of Eight. But it was in the Republicans’ benefit to not have a deal, comprehensive immigration reform, that included border security, that included a pathway. And by the way, most Americans think that you should pay a penalty, and there should be a pathway. And that’s not going to happen. You know why it’s not going to happen? Because Republicans in Congress don’t want it to happen.

“That’s just ludicrous,” responded Rosemary Jenks, the director of government relations for NumbersUSA, which seeks to curb the wealth-shifting inflow of legal and illegal immigrants. She continued:

There hasn’t been an immigration deal in decades — and we didn’t have a [migration] crisis at the beginning of January of 2021 but we did by the end of January 2021 … It’s incredibly transparent to most people — they know the Democrats are in charge, and if [President] Joe Biden wanted a secure border, we would have a secure borde …

Democrats are doing their normal thing where they’re projecting their sins on someone else — Whenever they accuse Republicans of something, it’s usually because they’re doing it themselves. In this case, they know full well that they are the reason that the borders are open and that we have this crisis, and so they’re projecting their failures onto Republicans … [But] despite the lack of coverage in the mainstream media, the public is still very well aware of what’s going on.

We don’t need to deal — we need solutions, we need to fix the border crisis. We need to enforce our laws. There’s no point in Congress passing more laws with some [new] deal if Mayorkas is going to pick and choose what law he’s going to enforce … [The Democratic Party] doesn’t care what the public wants. It wants what the party wants and the party wants a potential pool of new voters.

But Democrats are pushing their talking points as border chief Alejandro Mayokras raises the inflow each month to about 70,000 accepted illegal migrants.

n February, up to 165,000 migrants arrived at the border, and Mayorkas admitted 74,000 under various legal excuses. Very few of the arrivals were detained, as required by law.

The accepted inflow of 74,000 migrants adds to the other inflows of roughly 40,000 “got away” migrants who sneak through the border, plus roughly one million legal migrants per year, plus a huge inflow of at least 500,000 visa workers. All told, the current inflow imports roughly one migrant for every two American births.

Once the Title 42 barrier is released, officials suggest the inflow could just up to three migrants for every two American births.

But the Biden administration and its media allies are trying to keep the established media focused on blaming former President Donald Trump, not Biden.

The “Trump administration put people in place that were simply incompetent, and they tore down our ability to really handle a lot of the influx of folks at the border,” former Democratic Rep. Julian Castro said on April 3. He continued, “The Biden administration has had to pick up those pieces … I applaud the administration for lifting Title 42 I think it should have been done a long time ago.”

“A meaningful fix would require a legislative overhaul of the legal immigration system, which has eluded a dysfunctional Congress for years,” the Washington Post’s editorial board claimed on April 1.

“The Biden-Harris Administration is committed to pursuing every avenue within our authority to secure our borders, enforce our laws, and stay true to our values,” border chief Mayorkas said in an April 1 statement. “A long-term solution can only come from comprehensive legislation that brings lasting reform to a fundamentally broken system.”

Mayorkas is also blaming history and geopolitics, not the establishment’s policy of extracting migrant workers, consumers, and renters from poor countries:

The root causes fueling irregular migration predate today’s announcement, and we have experienced increases in migration over the past decade and long before. DHS is always preparing for the ebb and flow of migration patterns.

The Democratic blame-shifting only works if the public chooses to be deceived, Jenks said.

“It all relies on the idea that the American people are gonna buy it, which I just don’t see,” she said. “It is like the ‘Putin’s Inflation’ thing, and ‘Putin’s gas hikes’ — It’s just craziness because we all actually saw prices going up well before Russia invaded Ukraine.”

Since at least 1990, the D.C. establishment has used a wide variety of excuses and explanations — for example, “Nation of Immigrants” — to justify its policy of extracting tens of millions of migrants and visa workers from poor countries to serve as workers, consumers, and renters for various U.S. investors and CEOs.

The self-serving economic strategy of extraction migration has no stopping point. It is harmful to ordinary Americans because it cuts their career opportunities, shrinks their salaries and wages, raises their housing costs, and has shoved at least ten million American men out of the labor force.

The extraction migration policy is backed by progressives who wish to transform the United States from a society governed by European-origin civic culture into a progressive-led empire of competing identity groups. “We’re trying to become the first multiracial, multi-ethnic superpower in the world,” Rep. Ro Khanna (D-CA), told the New York Times on March 21. “It will be an extraordinary achievement … we will ultimately triumph,” he insisted.

Not surprisingly, the wealth-shifting extraction migration policy is very unpopular, according to a wide variety of polls. The polls show deep and broad public opposition to labor migration and the inflow of temporary contract workers into jobs sought by young U.S. graduates.

The opposition is growing, anti-establishment, multiracial, cross-sex, non-racist, class-based, bipartisan, rational, persistent, and recognizes the solidarity that Americans owe to one another.