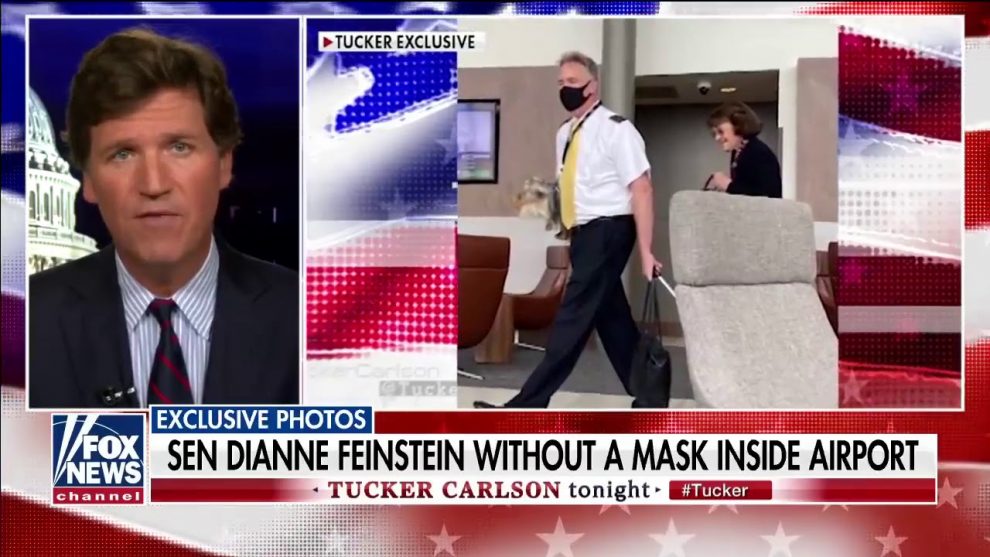 Senator Dianne Feinstein has been branded a ‘hypocrite’ after being pictured walking inside a Washington DC airport terminal without a face covering on – just months after she called for a national mask mandate for all airlines and airports.

The maskless California Democrat was caught on camera traversing her way through a private terminal at Dulles International Airport on Friday, with the images first aired by Fox News’ Tucker Carlson on Monday night.

Feinstein, 87, previously penned a letter to the Federal Aviation Administration and Federal Transit Administration on June 30 to institute mandatory mask mandates throughout airports, on airplanes, and on public transit across the country.

‘In the photographs, Feinstein can be seen smiling without a mask on. One might even say she’s sowing confusion about whether or not masks are necessary,’ Carlson mused in the segment Monday.

The host also pointed out that a pilot, who is wearing a mask, is seen walking in front of her ‘carrying a bag and a dog.’

Carlson compared the incident to similar images that surfaced of House Speaker Nancy Pelosi in San Francisco last month, when she was captured on surveillance camera receiving a blowout at a salon without a mask.

Pelosi later claimed the owners of the salon, which had been ordered to remain closed under COVID-19 related restrictions issued in March, had ‘set her up’.

‘We can be sure of one thing, this isn’t really Dianne Feinstein’s fault,’ Carlson said of Friday’s photos. ‘Just like when the hair salon framed Nancy Pelosi caught not wearing a mask while getting her hair done, Dulles Airport, the diabolical FBO, probably masterminded the whole thing.

‘We are going to stay on top of this story and bring you evidence of the airport’s guilt as we inevitably find it,’ Carlson sarcastically concluded.

In accordance with Virginia Gov. Ralph Northam’s executive order, face coverings have been required for all passengers, employees and contractors at Dulles Airport since May 29.

‘All passengers and visitors will be required to wear face coverings or masks during their time in the airports, with the exception of children under the age of 10 and people with medical conditions that prevent wearing a face covering,’ the airport states on its website.

The 87-year-old, who is the Senate’s oldest serving member, would be considered a high-risk should she contract the coronavirus.

A representative of Feinstein’s team has not yet returned a DailyMail.com request for clarification as to why the Senator wasn’t wearing a mask.

On June 30, Feinstein penned a letter to the FAA and FTA urging the agencies to implement mandatory mask mandates at airports, on airplanes and on public transit across the US.

‘I write to urge you to implement a mandatory mask policy for all airport and airline employees and passengers as cases of coronavirus continue to surge,’ she wrote in the letter. ‘I ask that you issue guidance as soon as possible so passengers can have a clear understanding of the requirements and so that we may reduce exposure for workers and travelers alike.

‘While some transit agencies and airlines have implemented mandatory mask guidance for the public, reports indicate that the patchwork of rules have only sowed confusion among passengers. Therefore, I ask that you issue clear, nationwide, mandatory mask requirements for all aviation employees and travellers,’ she said.

Just weeks later, she unveiled a plan to introduce an amendment to any secondary coronavirus stimulus bill introduced by the Senate that would withhold funding for any states who refuse to mandate mask wearing.

‘Wearing masks in public should be mandatory. Period,’ Feinstein said on July 17. ‘Leader McConnell said the Senate will take up the next coronavirus economic relief bill later this month. At that time, I intend to offer an amendment to prohibit sending funds to states that haven’t adopted a statewide mask requirement.’

Since the emergence of Friday’s images, people have taken to social media to furiously blast Feinstein as a ‘hypocrite’.

‘Tucker Carlson exposing Senator Dianne Feinstein for the hypocrite she is,’ one user blasted after Fox’s Monday broadcast. ‘She will mandate a “mandatory mask” policy in airports but when it comes to her, you guessed it, the rules do not apply!’

‘Tucker Carlson has pictures of Dianne Feinstein, unmasked, in a lounge at Dulles Airport,’ fumed another. ‘One more aging Democratic hypocrite. Yet these clowns are pushing for a national mask mandate. #DemocratsAreCorrupt.’

The emergence of the photographs come just days after Feinstein’s investment banker husband, Richard Blum, was identified as one of the culprits behind an admissions scandal at UC Berkeley, in which he wrote a letter that likely helped a ‘less qualified’ student skip a waiting list and enrol in the school.

Blum was named Thursday by the state auditor’s office as one of the regents involved in the plot where UC wrongly admitted dozens of wealthy, mostly white students as favors to well-connected people.

On the same day, Democrats also voiced concerns that Feinstein was too frail to head the Senate Judiciary Committee ahead of the upcoming supreme court confirmation battle over President Donald Trump’s pick to replace Ruth Bader Ginsburg.

Democrats worry Feinstein will miss manage the situation – which is expected to be heated and contentious – and hurt their party’s Senate candidates in the election.

The senator, who came into office in 1992, pushed back hard against her critics.

‘I’m really surprised and taken aback by this. Because I try to be very careful and I’m puzzled by it,’ Feinstein told Politico. ‘My attendance is good, I do the homework, I try to ask hard questions. I stand up for what I believe in.’