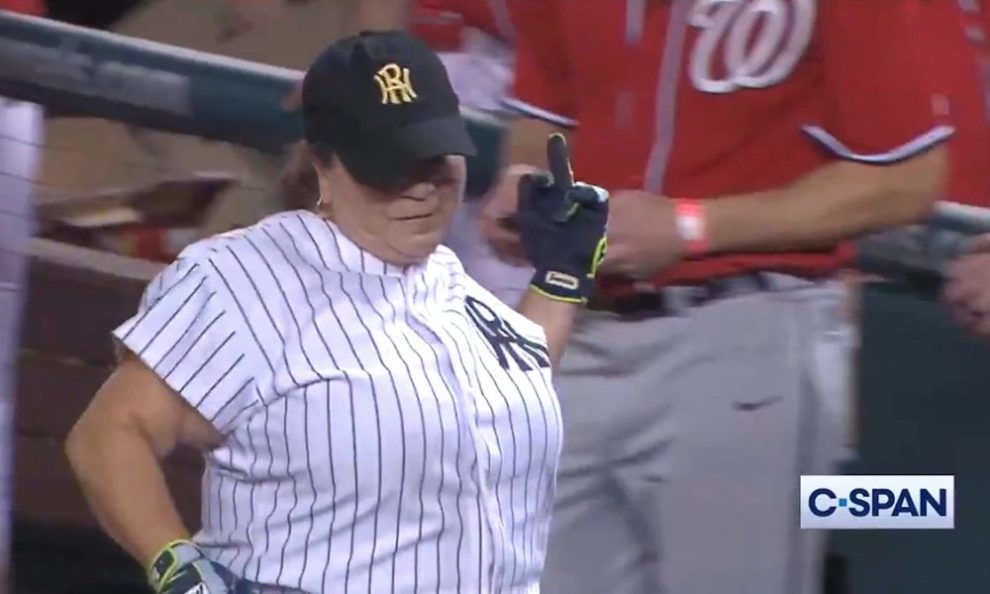 Democrat Rep. Linda Sanchez (CA) appeared to alter her story slightly in a statement late this week about what led her to appear to flip off the Republican dugout during Thursday night’s Congressional Baseball Game.

“It wasn’t the team,” Sanchez claimed in a second statement on Friday. “It was an obnoxious fan who shouts misogynistic s*** at me every single year.”

When asked what the fan allegedly said, Sanchez claimed, “I’m not going to dignify it with a response because it’s nasty and it’s crude, and it has no place at a charity baseball game.”

However, Sanchez once again resorted to playing the victim card and blamed Republicans for not standing up for her even though she appears to be the only person who heard the alleged remark and she won’t disclose what was said.

“If the Republican women would have stood up and said that’s not acceptable instead of, you know, trashing me for my response then we might have a place where there’s no misogyny that’s tolerated by anybody anywhere,” she claimed.

In a separate statement on Friday, Sanchez appeared to suggest that the remark came from the Republican dugout and made no mention of anyone in the crowd saying anything.

“The Congressional Baseball Game is one of my favorite events of the year. It’s a great cause and brings both sides of the aisle together for a night off from partisan politics,” the statement said. “That is why it really struck a nerve when I heard an offensive and misogynistic comment from the Republican side on my way back to the dugout.”

Corey Inganamort, who is the Mascot Coordinator for the Washington Nationals, according to his LinkedIn account, said that he was there and that Sanchez is lying.

“I was in the dugout with the Republicans last night. She is lying,” Inganamort wrote on Twitter. “Nothing offensive or misogynistic was said by anybody. In fact, everybody was shocked by what @RepLindaSanchez did.”

I was in the dugout with the Republicans last night.

Nothing offensive or misogynistic was said by anybody.

In fact, everybody was shocked by what @RepLindaSanchez did. pic.twitter.com/n0n7qdcFJs

Sanchez’s vulgar gesture comes five years after a left-wing terrorist tried to assassinate Republican lawmakers at one of the practices leading up the game. The terrorist shot five people, including Rep. Steve Scalise (R-LA), but fortunately, the only person who was killed was the terrorist.

“5 years ago my colleagues & I were attacked playing baseball—because we’re Republicans,” Scalise wrote on Twitter. “We didn’t let it stop us then & nothing will stop us now. It’s been a long journey, but tonight we play the Congressional Baseball Game—5 years stronger.”