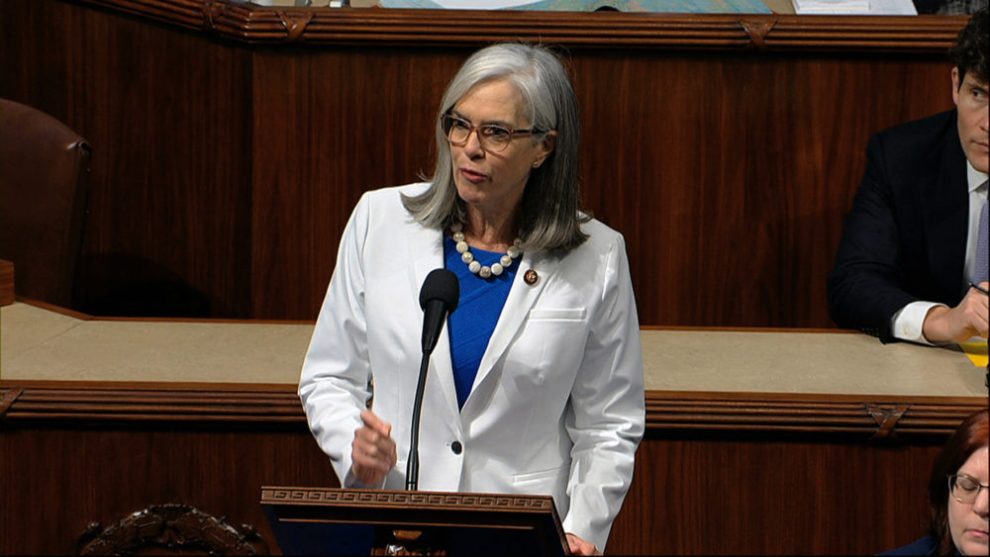 Jared Dowell, the 23-year-old child of House Minority Whip Katherine Clark (D-MA), was arrested and charged with assault and property damage after police found Dowell vandalizing a historic Boston monument with anti-police graffiti, according to the Boston Police Department.

The department said in a statement that officers discovered Dowell on Saturday night during a protest spray-painting “NO COP CITY” and “ACAB,” which is an acronym for “all cops are bastards,” on the Parkman Bandstand located in the Boston Common.

About 20 of the protesters surrounded the officers during the encounter “while screaming profanities through megaphones on the public street,” the department said, adding that during the arrest of Dowell, an officer was hit in the face and started bleeding.

Dowell was charged with assault by means of a dangerous weapon, destruction or injury of personal property, and damage of property by graffiti/tagging, and is expected to appear in Boston Municipal Court, according to the department. While the police did level an assault charge against Dowell, it is unclear from the department’s statement if Dowell was the one who hit the officer.

The report first gained attention through an anonymous social media account called AntifaWatch, which monitors the activity of Antifa, a far-left antifascist movement that has at times been associated with political violence.

AntifaWatch claimed in an online thread that Dowell’s Facebook page, which is unavailable at present, had only just become publicly inaccessible at some point after the arrest.

It appears that the child of Democrat House Minority Whip Katherine M. Clark was arrested for assaulting police as part of an #antifa event in Boston last night.

Clark, the second-ranking Democrat in the House, confirmed in a statement Sunday night that her “daughter,” who she indicated is named Riley, had been arrested.

“Last night, my daughter was arrested in Boston, Massachusetts. I love Riley, and this is a very difficult time in the cycle of joy and pain in parenting,” Clark wrote. “This will be evaluated by the legal system, and I am confident in that process.”

Last night, my daughter was arrested in Boston, Massachusetts. I love Riley, and this is a very difficult time in the cycle of joy and pain in parenting.

This will be evaluated by the legal system, and I am confident in that process.

Clark said in a 2021 floor speech ahead of voting in favor of the Equality Act that she had a child who was “nonbinary.” Dowell’s identity change appears to have occurred in the last two years as Clark referenced having only sons with her husband, Rodney Dowell, through as recently as 2020.

In addition to the protest on Saturday, Dowell appears to be in tune with other political causes. Clark told Meet the Press in December, “I remember my middle child [Dowell] waking up with nightmares over concern around climate change,” according to a clip shared by RNC Research.