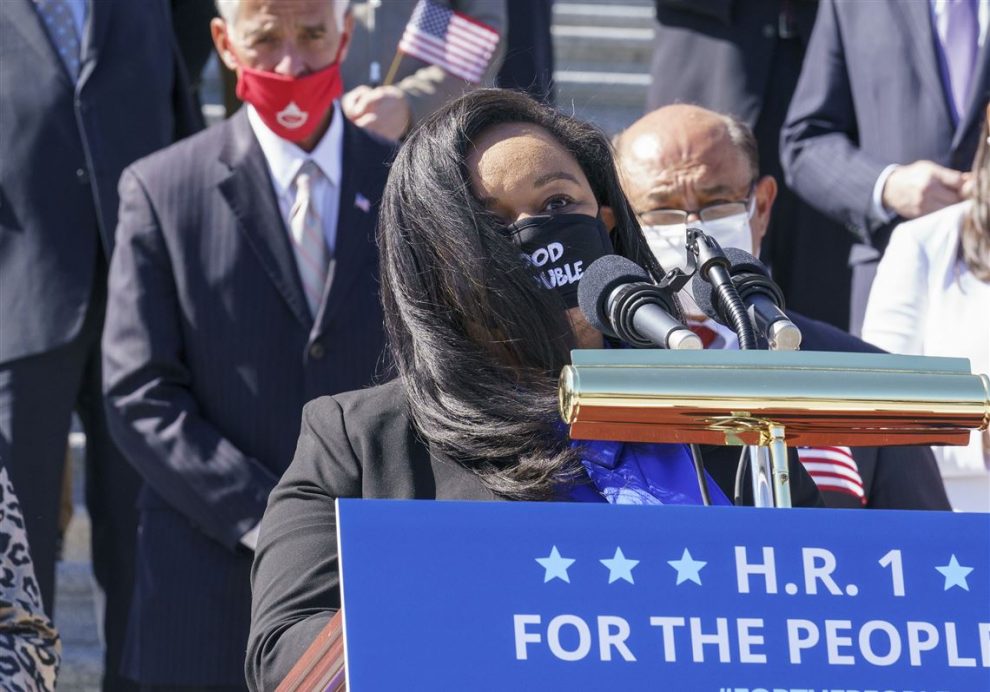 The U.S. House of Representatives on Wednesday passed H.R. 1, otherwise known as the “For the People Act,” which Republicans warn will compromise election integrity and ultimately lead to the federalization of U.S. elections.

The Democrat-led House passed the legislation on party lines, 220 to 210. A summary of the bill notes that it “expands voter registration (e.g., automatic and same-day registration) and voting access (e.g., vote-by-mail and early voting)” and imposes limits on removing voters from voter rolls.

Republicans have warned that the Democrat legislation would vastly reduce the power of the states to control and operate elections at the local level.

“If this bill passes, it puts in all these terrible provisions,” Hans von Spakovsky, manager of the Heritage Foundation’s Election Law Reform Initiative and a senior legal fellow of the Meese Center for Legal and Judicial Studies, said during a January appearance on Breitbart News Daily.

“If you’re a state like Alabama or Texas that has a voter ID law, you might as well forget it, because this federal law would override all state voter ID laws so they’re now unenforceable,” von Spakovsky added.

Speaking to Breitbart News on Tuesday, Rep. Mo Brooks (R-AL) warned that the “Socialist Democrat Election Fraud Enhancement Act” would do “great damage” to the nation’s election system by taking power away from the states.

“The socialists seek to mandate no-fault absentee ballots, which are the tool of choice for vote thieves. They seek to eliminate the photo identification requirement and, by the way, when the federal government does it, that eliminates all state laws to the contrary,” Brooks said.

“It, to a very large degree, federalizes and micromanages the election process administered by the states. It implemented, as I mentioned, some of the worst changes in election rules that occurred during the 2020 election,” the Alabama congressman continued. “It requires states to restore the ability of felons to vote the moment they’re out of prison, regardless of uncompleted parole, probation, or restitution requirements or what states may believe is the appropriate restoration of voting rights for convicted felons.”

“We have H.R.1 and the Democrats, they call this the ‘For the People Act.’ No. It’s the ‘For the Swamp Act.’ This is something that will federalize our elections. It’s a D.C. takeover of our elections,” Boebert said. “This goes right back to them controlling the language. They act like it’s something that’s great for you. … They act like all of these things are wonderful for the American people, and they’re not.”

“But the ‘For the People Act,’ ‘For the Swamp Act,’ you know, this actually has tax dollars that will pay for politicians’ campaigns. It’s disgusting,” she added. “No tax dollar should go to a campaign.”

As Fox News reported, “A major pillar of the legislation is setting up a new public financing system for congressional and presidential elections to incentivize small-dollar donations”:

The legislation would establish a 6:1 match for each grassroots contribution to a candidate up to $200.

Other Republicans forcefully spoke out against the bill following the passage:

Every single American should be OUTRAGED by this:

H.R. 1, the “For the Politicians Act,” would allow public funds to be used to finance politicians’ reelection campaigns. There are far better and more urgent needs for public funds – Democrats are again putting their interests above the needs of the American people. pic.twitter.com/Nd7vtoivw1

Tonight, I voted against H.R. 1, an extremely partisan and unconstitutional bill. Protecting state rights is a priority of mine, and this legislation is the “Californication” of our election laws.

This bill forces taxpayers to fund political campaigns, infringes on our First Amendment rights, and federalizes our elections without requiring any safeguards against voting irregularities in our election process.

Tonight I voted against H.R. 1.

Protecting the integrity of our elections should be of utmost importance to Congress, but this legislation attempts to politicize our institutions, federalize our elections, and fund politicians’ campaigns.https://t.co/sHk1DfYbTR

At a time when we should be focused on how to get our economy open & running again, the last thing we should be doing is finding a way to send taxpayer dollars into politicians’ campaign coffers.

My complete statement in opposition to H.R.1 ⤵️ pic.twitter.com/dHVkuX9WPe

Today I voted against H.R. 1, the “For The Politicians Act,” which amounts to a federal takeover of elections.

This power grab would undermine ballot integrity and restrict the voice of each individual citizen in our election process. pic.twitter.com/EJhL7S92WH

H.R. 1’s provision expanding the definition of an election-related communication will open the door for bureaucrats in Washington to label any political speech they dislike as election-related. /5

Elections belong to the people. The so-called “For the People Act” would concentrate power among entrenched Democrat politicians instead. pic.twitter.com/L7rR0M6RMD

The House passage of H.R.1 appears to mark the beginning of House Speaker Nancy Pelosi’s (D-CA) plans for a two-week legislative blitz, turning her chamber “into a factory for Democratic priorities.”