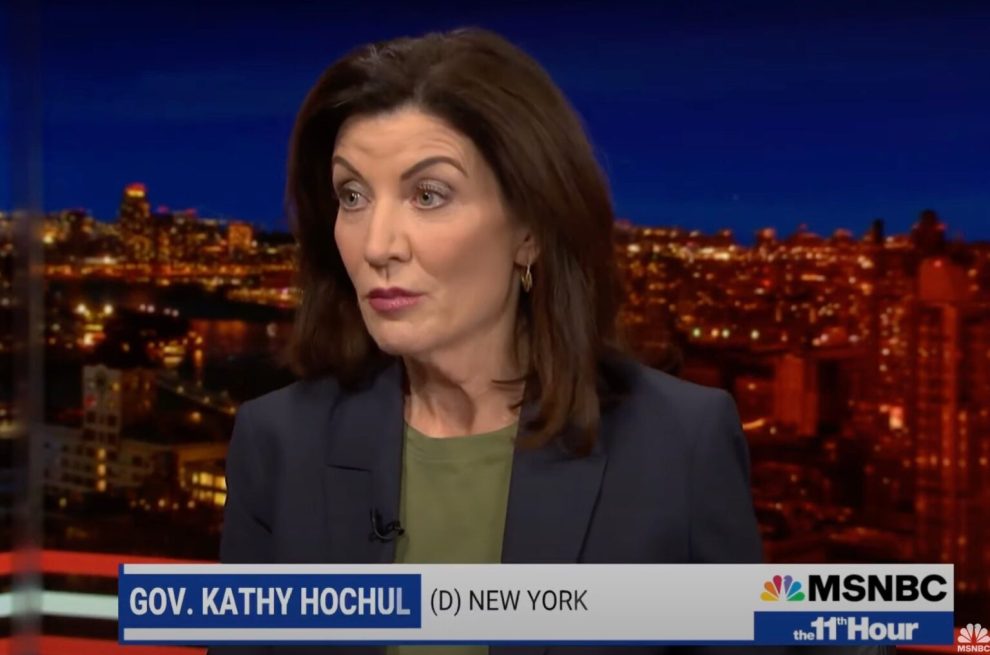 Governor Kathy Hochul sits down with MSNBC’s Stephanie Ruhle on Saturday to talk about her opponent, Republican Lee Zeldin, and to discuss pressing problems in New York including crime which is out of control, and criminals getting a pass with cashless bail and no consequences due to Hochul’s policy.

During the course of their interview, Ruhle interrupted Governor Hochul, called her out, and stated that New Yorkers do not feel safe under her leadership.

Gov. Hochul: The Governor of New York is working in partnership with the mayor of New York City… I said, Mayor, I’m here to help you. Let me help get people who are severely mentally out of the subways. Let’s talk about getting more police officers. A couple of weeks ago, we got cameras in all the subway trains. We’re starting with that process… No governor has spent more money than I have on public safety in history.

Ruhle: I’m going to interrupt you then. Here’s the problem. We don’t feel safe. You might be working closely with Mayor Adams. You may have spent a whole lot of money, but I walk into my pharmacy and everything is on lockdown because of shoplifters. I’m not going in the subway. People don’t feel safe in this town. So you may have done these things, but right now we’re not feeling good. We’re worried. We could be San Francisco.

Hochul: Because we are already making a difference. We already have homicides and shootings down dramatically from what they had been last year. And that’s the most heinous of all crimes there are.

Even MSNBC is calling out Democrat Kathy Hochul.

"Here's the problem: We don't feel safe…I walk into my pharmacy, and everything is on lockdown because of shoplifters. I'm not going in the subway. People don't feel safe in this town." pic.twitter.com/JUKhxXCk4c

Voters in New York are concerned about inflation, rising costs, and the rising crime rate.

Neither a Republican senator nor a Republican governor has been elected to office in New York in the past two decades, but that could soon change.

Another poll shows that @leezeldin SLIGHTLY LEADS in the race for New York Governor! We are so close to making history right here in New York. We are just asking you to dig a little deeper to help us over the finish line. CLICK HERE: https://t.co/dCtgOKx6Pl pic.twitter.com/Xw49ZJp9I3

See also  California, a Free State Since 1850, May Pay $233k in Reparations per Slavery Descendant
Share this article: