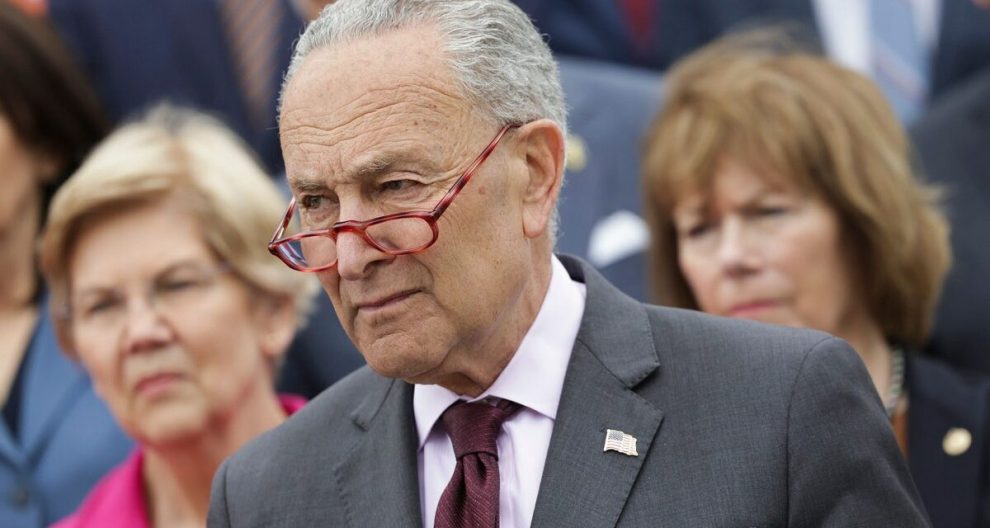 A Democrat-sponsored bill that would have legalized abortion through all nine months of pregnancy failed in the Senate on Wednesday by a vote of 51-49.

The bill, known as the Women’s Health Protection Act, had passed the House last September and was brought forth for a Senate vote by Majority Leader Chuck Schumer (D-NY) in wake of the leaked Supreme Court opinion draft showing that the court is poised to overturn Roe v. Wade. Schumer and other Democrats had claimed that the bill was necessary to codify Roe and protect the right to abortion throughout America. Critics of the bill said it went way beyond Roe.

“The Women’s Health Protection Act would protect a person’s ability to decide to continue or end a pregnancy and would enshrine into law health care providers’ ability to offer abortion services ‘prior to fetal viability’ without restrictions imposed by individual states, like requiring special admitting privileges for providers or imposing waiting periods,” NPR noted.

However, the bill would also legalize abortion after fetal viability, “when, in the good-faith medical judgment of the treating health care provider, a continuation of the pregnancy would pose a risk to the pregnant patient’s life or health,” according to the bill.

That language would overrule various state laws. Likewise, critics like The Wall Street Journal pointed out that the term “health” is too open-ended and could allow abortions for virtually any reason, so long as it’s signed off by an abortion provider.

Health is “sometimes defined to include mental, emotional or familial factors, a loophole that permits elective abortions, more or less, through all nine months of pregnancy,” the Journal argued.

Senate Minority Leader Mitch McConnell (R-KY) blasted the bill on Wednesday, saying, “Our Democrat colleagues want to vote for abortion on demand through all nine months, until the moment before the baby is born — a failed show vote that will only prove their own extremist.”

Senator Steve Daines (R-MT) also slammed the bill in a statement to The Daily Wire.

“Under the Democrats’ bill, a preborn child, simply for the crime of being ‘unwanted’, or ‘inconvenient’, or ‘unplanned’, could be subjected to brutal dismemberment procedures, in which the unborn child bleeds and feels excruciating pain as she dies from being pulled apart limb from limb,” Daines said.

“The Democrats’ abortion bill would codify an extreme abortion regime that is aligned with brutal nations such as China and North Korea — which would impose abortion up until the moment of birth without any limits in all 50 states,” he added. “In a nutshell, this radical bill would make the United States of America one of the most dangerous places in the world to be a preborn child.”