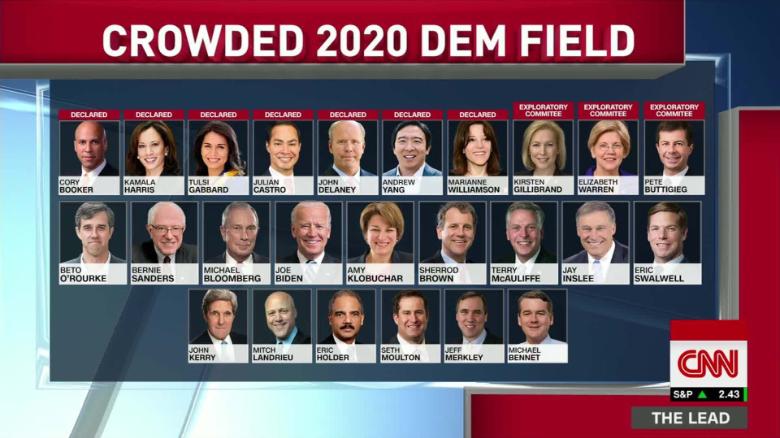 The gloves are beginning to come off in the crowded Democratic race for the White House that so far has resembled more of a tea party than a bar-room brawl.

Pete Buttigieg said this week he didn’t think Sen. Bernie Sanders (I-Vt.) could rebuild the coalition that pushed his 2016 candidacy forward, a line many saw as a shot undercutting a rival campaign.

Those remarks came after Sanders’s campaign co-chairman Ro Khanna (D-Calif.) lashed out at Buttigieg for comparing Sanders’s supporters to President’ Trump’s, even though Buttigieg had been praising Sanders for reaching out to the anti-establishment voters that Democrats have been accused of ignoring.

Separately, the Sanders campaign swiped at former Vice President Joe Biden, who entered the race early on Thursday, for raising money at the home of a “corporate lobbyist” shortly after launching his campaign. And Justice Democrats, a group launched by former Sanders campaign aides, issued a blistering statement attacking Biden as a corporate shill and saying he’s the wrong kind of politician for the party to nominate.

The new attacks come as the race for the party’s nomination takes shape around Biden and Sanders, who are the clear front-runners at this early stage. Both are now coming under attack.

It’s a big shift from the niceties that have been on display among the candidates so far and likely foreshadows a brutal race to come, as mid-tier and lower-tier candidates face pressure to knock down the top two in an effort to break out from the pack.

“It’s going to be nasty,” predicted one Democratic strategist.

There’s nothing unusual about a nasty primary fight and it doesn’t necessarily mean the party will be defeated in the general election.

Facing a similarly crowded Republican primary in the summer of 2015, then-candidate Donald Trump came out swinging.

His frequent insults of his rivals, including “low-energy” Jeb Bush, fueled his campaign and turned the front-running former Florida governor into an also-ran. Trump ended up winning the primary and the general election.

The Democratic race hasn’t been like that race at all, as none of the major candidates have been throwing haymakers.

There are worries among Democrats, however, that as things get uglier, it could hurt the party.

“A primary race is good for the party, we’re seeing real innovative ideas,” said Andrew Feldman, a Democratic strategist. “But at the end of the day, we have to make sure we don’t tear each other apart to the point where we can’t come back and beat Trump.”

Mainstream Democrats on Thursday were seething over the Justice Democrats statement issued hours after Biden’s announcement.

Alexandra Rojas, a former field organizer for Sanders who now runs the liberal group, called Biden “the old guard of the Democratic Party,” who she said was responsible for failing to stop President Trump.

“Joe Biden stands in near complete opposition to where the center of energy is in the Democratic Party today,” Rojas said.

Biden’s defenders argued the former vice president has spent his career pushing the party forward on key issues, such as marriage equality.

“The Justice Democrats make me sick,” said one Democratic strategist.

A Sanders aide told The Hill the campaign welcomes Biden’s entrance into the race and they hope the contest stays focused on the issues.

“This campaign is not about telling people who to vote against, it’s about outlining the ideas and policies people can vote for and letting the voters decide for themselves,” the aide said.

Some Democrats say Sanders has a responsibility to keep his online supporters from throwing fire. They view some of his backers as ruthless attack dogs that will do Sanders’s fighting for him.

“It’s up to Bernie to rein-in his surrogates,” said Jon Reinish, a Democratic strategist. “He didn’t do that in 2016 and it was to the great detriment of the party. I’m confident that even if he doesn’t win the nomination, he’ll move to unify the party. The question is whether his trusted message-carriers will.”

On the left, there is bitterness over how the Democratic National Committee and Clinton treated Sanders in 2016 — and worries the party will pull out all the stops to defeat progressives this time around.

It’s one reason Biden’s entry in the race is a watershed moment — and one many think will preface a more negative campaign.

“He’s a corporate Democrat, through and through,” Charles Chamberlain, the chairman of the liberal group Democracy for America, said Thursday after Biden entered the race.

Liberals are also warning Democrats that it would be “self-defeating” to anger the activist base because that’s where the energy is in the party.

“Both wings of the party know how high the stakes are, but I hope the establishment wing understands how dangerous it would be to attack Bernie Sanders or anybody else who they may feel represents the left-wing of the party,” said Robert Reich, Bill Clinton’s former Labor Secretary and a progressive thought-leader. “That would be really stupid and self-defeating and anyone who cares about the future of this country should exert every bit of influence to prevent that.”

But if Sanders is leading the race, he’ll almost surely be a target.

Candidates are beginning to stake out positions in opposition to Sanders, whose critics warn that he’s too far outside the mainstream.

This week, Sanders said that violent criminals and domestic terrorists, including the Boston Marathon bomber, should be able to vote from prison. A cascade of Democratic contenders immediately broke with him, saying that convicted felons should only be allowed to vote once they’ve finished serving time.

Buttigieg, who has been riding a wave of momentum and is the surprise of the race so far, raised eyebrows when he questioned whether Sanders could reform his 2016 coalition during an interview with The New York Times.

Buttigieg said there was a “novelty” to the boldness of the Sanders approach in 2016 and that this might be difficult to capture again in 2020.

“I think the difference is that a lot of the interest in him also was that people were refreshed by the novelty of that boldness,” he said.

While he said Sanders had always been bold, it was new on a national level.

“I have a hard time seeing the kind of coalition that he needs ultimately coming together,” he said.

The Buttigieg campaign said their candidate wasn’t saying that Sanders couldn’t defeat Trump with his comments.

In a statement to The Hill, Sanders campaign manager Faiz Shakir said Sanders is leading the charge in “standing up to powerful corporate interests, taking on the billionaire class, defeating Trump and creating a government that works for all people.”

“Bernie’s unwavering commitment to this fight and his unifying progressive agenda has made him the best positioned candidate to defeat Donald Trump in the general election,” Shakir said.