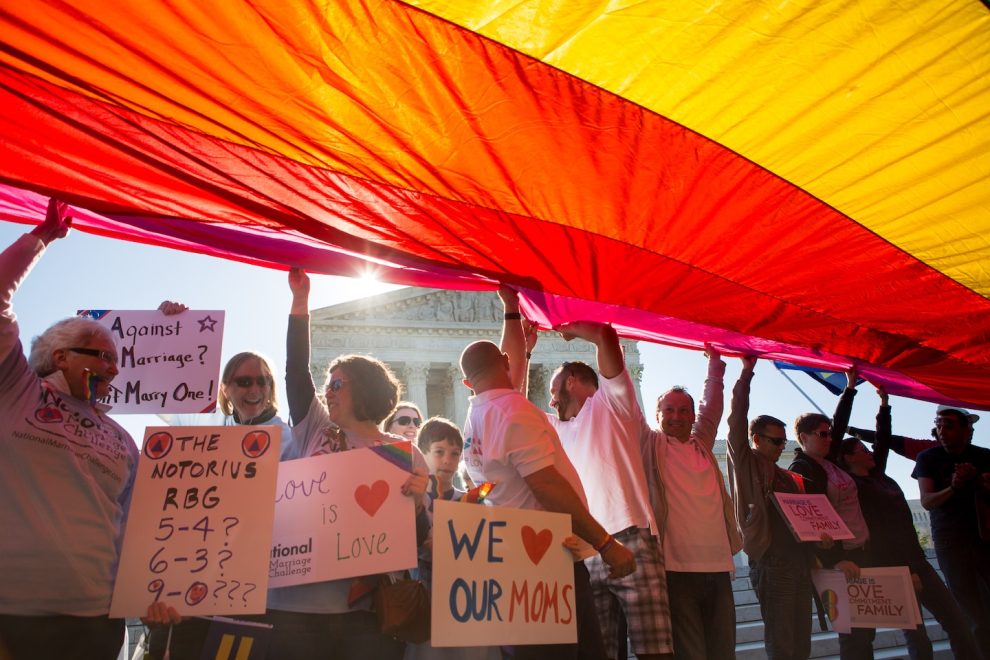 U.S. Senators advanced landmark legislation Tuesday, 61-36, that would codify same-sex marriage protections into law, despite opposition from most GOP lawmakers who argue the bill’s language infringes on religious freedoms.

Senate Democrats unanimously supported — with the help of some Republicans — the Respect for Marriage Act, which repeals the Defense of Marriage Act that legally defined marriage as between one man and one woman and permitted states not to recognize same-sex marriages from other states.

The bill would not force states to allow same-sex couples to marry under the Supreme Court’s 2015 Obergefell v. Hodges decision. It would, however, make it so that any “person acting under color of State law” fully recognizes marriage between two people in another state and that the federal government must recognize marriages if they were valid in the state where the marriage occurred.

“I hope we can get it done with all due speed because millions of Americans deserve equal justice under the law and the peace of mind knowing their right to marry the person they love is protected,” Senate Majority Leader Chuck Schumer (D-NY) said Monday.

Schumer and congressional Democrats moved the bill quickly allegedly out of fear that the Supreme Court would take up the landmark 2015 ruling that legalized marriage nationwide after overturning Roe v. Wade last summer.

Since the bill first worked through the halls of Congress, Senate Democrats worked to garner ten GOP votes — enough to clear the 60-vote filibuster threshold.

Oklahoma Republican Senator James Langford, who proposed an amendment addressing religious liberty concerns, warned that the language fails to place any restrictions which would cause entities such as nonprofits or faith-based organizations to choose not to provide those services or to “abandon their faith.”

“I encourage everyone in this body to ask a very simple question to themselves: is today about respecting the rights of all?” Langford said on the Senate floor. “Or is it about silencing some?”

Sen. Mike Lee (R-UT) called on his Republican colleagues in favor of the legislation to include protections for anyone with a religious belief or moral conviction that marriage belongs to one man and one woman.

Lee introduced an amendment prohibiting federal bureaucrats from discriminating against individuals, organizations, and other religious entities by stripping away tax-exempt status, licenses, contracts, or other benefits.

“Instead of subjecting churches, religious nonprofits, and persons of conscience to undue scrutiny or punishment by the federal government because of their views on marriage, we should make explicitly clear that this legislation does not constitute a national policy endorsing a particular view of marriage that threatens the tax-exempt status of faith-based nonprofits,” he wrote. “As we move forward, let us be sure to keep churches, religious charities, and religious universities out of litigation in the first instance.”

Neither Langford, Lee, or Sen. Marco Rubio’s (R-FL) amendments to the bill passed.

Sen. Josh Hawley (R-MO) echoed that the religious groups lacked protection under the bill and said that same-sex marriage should be left to the states.

“I think the constitution is silent on this issue,” Hawley said, according to an NBC affiliate. “Churches and religious organizations and religious persons I think will have their liberties infringed.”

Roger Severino, vice president of domestic policy at the Heritage Foundation, wrote in a recent blog post arguing against the bill that “marriage is the exclusive, lifelong, conjugal union between one man and one woman— and any departure from that design hurts the indispensable goal of having every child raised in a stable home by the mom and dad who conceived him.”

Democratic Sen. Raphael Warnock missed the vote as he was campaigning in Georgia for next week’s Senate runoff against Republican Herschel Walker.

Utah Sen. Mitt Romney, who voted in favor, said the bill would not affect the rights of private individuals or businesses already protected by the law.

“This legislation provides important protections for religious liberty — measures which are particularly important to protect the religious freedoms of our faith-based institutions,” Romney said in a statement. “While I believe in traditional marriage, Obergefell is and has been the law of the land upon which LGBTQ individuals have relied. This legislation provides certainty to many LGBTQ Americans, and it signals that Congress — and I — esteem and love all of our fellow Americans equally.”

The bill will move back to the House of Representatives for a final vote. The previous version of the bill passed the lower chamber 267-157.

House Majority Leader Steny Hoyer (D-MD) said Representatives hope to pass the bill as early as December 6, which would then go to the desk of President Joe Biden, who has pledged to sign it into law.