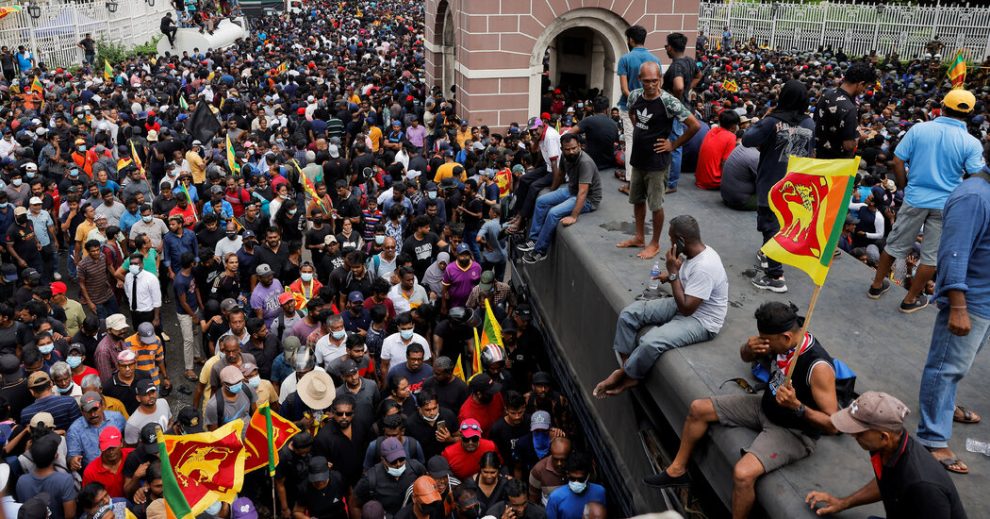 After suffering from weeks of brutal food and fuel shortages, as well as crippling inflation, Sri Lankans have had enough.

Riots have broken out throughout the impoverished country. Police have used tear gas and water cannons but to little effect.

Shortly after thousands of angry citizens stormed the presidential palace, even going so far as to swim in his pool, Sri Lankan President Gotabaya Rajapaksa declared that he will step down. Prime Minister Ranil Wickremesinghe agreed to resign as well after his home was torched.

In an attempt to improve Sri Lanka’s Environmental, Social, and Governance (ESG) score (which is totally communist), President Rajapaksa forced farmers to grow food organically and banned the use of synthetic fertilizers and pesticides, thus causing the nation’s rice crop to fall by 20% in the first six months. Crop productions dropped 40-50%.

Food shortages were next. (Hey Netherlands, are you watching?)

Inflation exploded and half a million Sri Lankans slid into poverty.

It seems the people of Sri Lanka have had enough of their government.

The protests started several months ago went the nation began to run low on fuel, food, and medicine. Power blackouts were next. As the protests became violent, police and military troops began firing at angry mobs.

The president then shut down schools and government offices for two weeks while ignoring demands to step down. The chaos got worse. Roughly 80% of Sri Lankans began skipping meals to save on food and money.

The calamity goes back to that commie ESG rating.

“The decision to overnight shift away from synthetic fertilizers was an absolute disaster,” economist Peter Earle opined. “To the extent that any part of this organic agriculture decision was made based upon some version of green or green from the ideologies, this is just the first of many unintended consequences we’ve seen from these kinds of policies.”

FACT-O-RAMA! Many American banks are embracing ESG — and the Great Reset. This will likely result in greater control for the banks. Here is why:

If banks are allowed to collectively decide to stop financing any group of people they want, based not on financial concerns but ideological considerations, then banks and their Great Reset allies will have, in effect, near-total control over society—especially if they begin to tie lending decisions to a vast ESG system.

FACT-O-RAMA! The Trump administration invoked a rule that would have made it illegal for banks to operate this way. Biden killed it days after taking office.

And now that Sri Lanka is on the ropes, who has offered to help? India, China, and the International Monetary Fund (IMF). Delegates from the IMF met with Sri Lankan officials to discuss a bailout. Psssst, The IMF has been overrun with commies.

Sri Lanka went woke to improve its commie ESG rating. Then it went broke. Who is there to help the country out of this havoc? More bolshies. Sri Lankans may either starve to death or could be saved by, and beholden to, communists. Was that always the plan?

The Netherlands is exploding right now because their government decided to kill off 30% of their farms.

FACT I DIDN’T THINK I NEEDED TO SAY-O-RAMA! Closing farms, while the world is undergoing food shortages, is insane. We need to look at who is behind these decisions. I bet we will find a hive of commies.

We’ve been seeing food shortages here in the U.S. already. Fuel is too expensive, and our supply chain is a joke. Worst of all, it seems as if Biden is only too happy to play along.