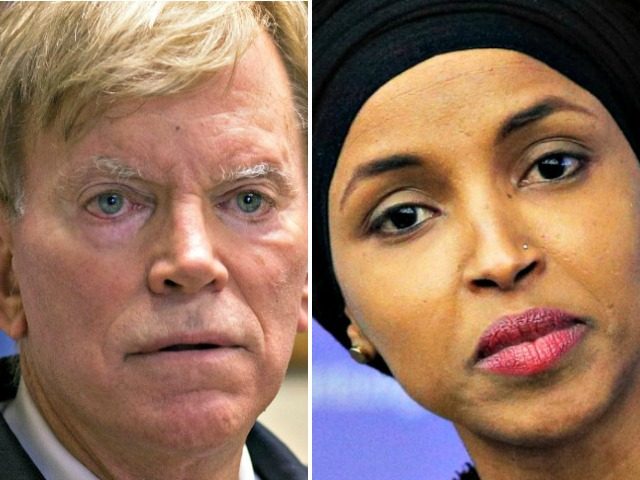 David Duke, the former Grand Wizard of the Ku Klux Klan and an open racist and antisemite, is publicly defending Rep. Ilhan Omar (D-MN) in the wake of the freshman Democrat’s series of antisemitic statements that have rankled the Democrat Party nationally.

Duke tweeted his praise of Omar on Thursday, calling her the “most important member of the US Congress” now that she has stood up to Democrat Party leadership after making antisemitic statements against Israel:

Duke tweets a link to his website where he says he discusses why he believes Omar is the “most important member of the US Congress” now in an hour-long radio segment. But during the overtly anti-Semitic hour-long segment, he does not specifically mention Omar–he just repeatedly bashes “Zionists,” rips the United States for having “unleashed Jewish power,” attacks “Jewish influence in government” and “Jewish elite control over media.”

Particularly relating to Omar, however, on the website posting it says regarding Duke and his colleague: “In particular, they heaped praise on Ilhan Omar (D-New Somalia) for being the one person in Congress willing to notice AIPAC and the ‘dual’ loyalty of many (((members of Congresss))).”