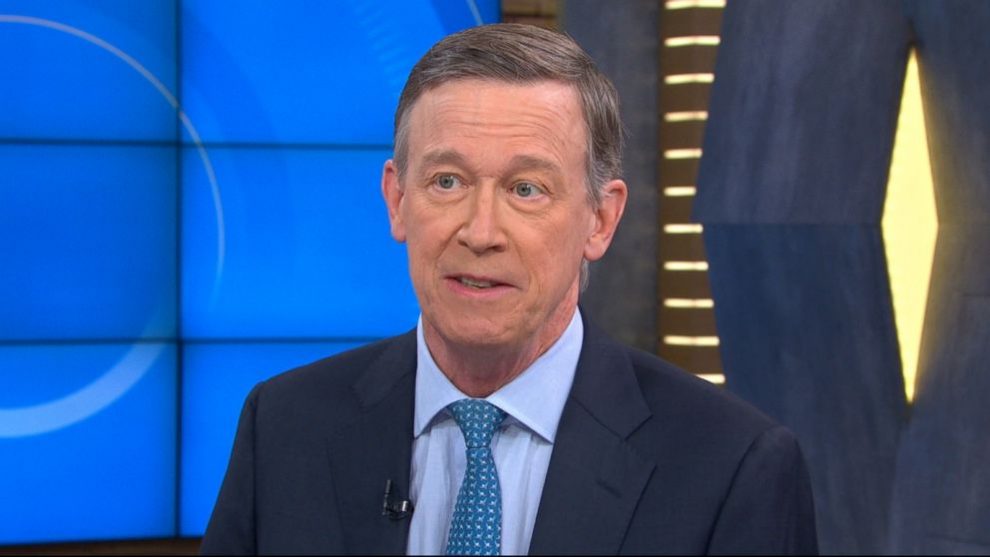 Former Colorado Gov. and 2020 Democrat presidential candidate John Hickenlooper said Friday that he will support legislation to establish a commission to study reparations for black Americans if elected president.

Hickenlooper endorsed the measure while speaking at the four-day conference of the National Action Network, the civil rights organization founded by the Rev. Al Sharpton. The MSNBC host asked whether Hickenlooper would sign such a bill as president, and when he began to equivocate, the crowd became agitated, with one audience member crying out: “Yes or no!”

Hickenlooper begins: "I look at the opportunity to provide every person a real chance…."

Audience member: "Yes or no!"

Hickenlooper, who'd already said in his remarks he would: "YES!"

John Hickenlooper was brutally filibustering on saying he would sign a bill into law if it got to his desk on reparations, after his hallow talk about supporting a Commission study.

“Yes or No” some in the crowd yelled to answer instead of dancing around #NAN #NANConvention pic.twitter.com/eUzsYqhaIf

The bill, sponsored by Rep. Sheila Jackson Lee (D-TX), would “make recommendations concerning any form of apology and compensation to begin the long-delayed process of atonement for slavery.”

Other 2020 presidential contenders such as Sens. Elizabeth Warren (D-MA) and Cory Booker (D-NJ) have voiced support for the measure. White House candidate Rep. Tulsi Gabbard (D-HI) is a co-sponsor of the bill.

On Wednesday, former Rep. Robert Francis “Beto” O’Rourke (D-TX) came out in favor of it, declaring at the National Action Network conference that he would “absolutely I would sign that into law.”

Later, speaking with Equal Justice Initiative executive director Brian Stevenson, O’Rourke said the word “repair” is foundational to reparations.  “Until all Americans understand that civil rights” also involves “the injustices that have been visited and continue to be visited on people, we will never get the change that we need to live up to the promise of this country. So absolutely I would sign that into law,” the Texas Democrat said.

Julian Castro, who is the most supportive candidate of reparations, said Wednesday that he believes the U.S. “will never truly heal until we address the original sin of slavery.”