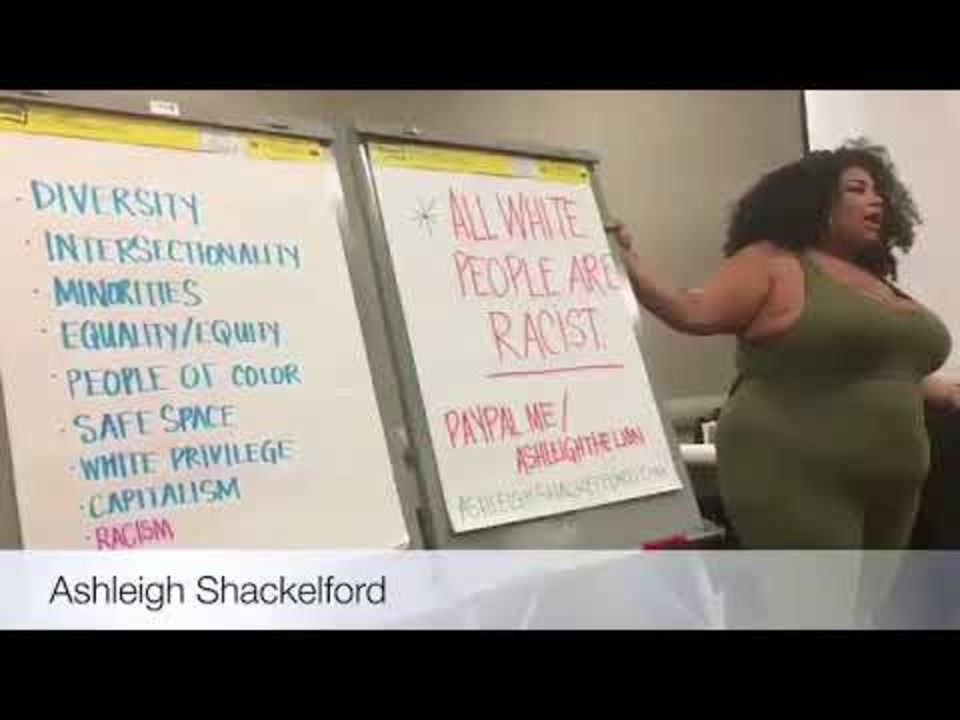 Earlier this month, President Trump issued a much-needed executive order abolishing all use and funding of critical race theory by the military, federal bureaucracy, and federal contractors.

The President’s order immediately triggered furious howls of doom and denunciation from the left. During Tuesday evening’s debate, President Trump’s opponent Chris Wallace joined the chorus, whining that the President’s executive order equated to a ban on all “racial sensitivity training.”

Wallace’s contention could not have been more misleading. To falsely equate poisonous critical race theory with “sensitivity training” is a crime against truth. Sensitivity training suggests something fairly innocuous, like instructing trainees to avoid racial slurs or inappropriate remarks in the workplace.

Critical race theory, on the other hand, is a deeply ignorant and immoral doctrine of anti-white, anti-American poison whose only purpose is to turn Americans against their history, traditions, families, and fellow citizens.

Let me explain what critical race theory is. It comes out of Marxism. And it divides the world into oppressors and the oppressed, or the victims. Minorities are the victims. White people are the oppressors. It argues that all White people are racists. That they have a property interest in their whiteness. That they should divest themselves of their whiteness. And they divest themselves by becoming anti-racist.

And you become anti-racist by actively engaging in the society in fighting racism wherever it appears. The problem is the left continually redefines what is considered racist. And the whole exercise of this diversity, equity and inclusion training focuses on making white people aware of their privileges that are undeserved – that is tied to the sins of their fathers and themselves.

It argues that all white people are racist. It’s not enough to say that you are not a racist. You have to actively do something that proves that you aren’t. The problem in America, and the problem for churches, is that it’s like a whole new gospel, because it requires every white person to confess with their mouths that they are racists.

Because they were born with white skin color, they are required to become woke. And when they become woke, then they have to engage in anti-racist behavior to make themselves right on this issue. And we know that for Christians that racism is a sin, just like there are other things that we do that are sins.

And that all a person has to do is to confess that sin. And we believe that Jesus Christ died on the cross for our past and present sins. And so it’s not a thing that you have to continually apologize for. And we also believe, I mean the whole thing is ridiculous. But here’s the issue.

In America it is unconstitutional, I believe, it’s a violation of the equal protection clause to single out one particular race for shaming or for discrimination. And it’s also a violation of the Civil Rights Act of 1964 that prohibits racial discrimination. And what takes place in those sessions, and in many orientation exercises, is a shaming of white people that would be inappropriate if it was being done to any other group.

They have forced sensitivity training. And for one thing, it doesn’t work. There is no evidence that it actually works. It creates more resentment. [Tennessee Star]

As you can see, President Trump was completely correct when he described it as a doctrine that demands Americans hate their own country.

WALLACE: "Why did you decide to do that, to end racial sensitivity training — and do you believe that there is systemic racism in this country?"

TRUMP: "I ended it because it's racist" #Debates2020 https://t.co/8XKphUeiZp pic.twitter.com/7aTovVh5pn

To get a better sense of the vileness and absurdity inherent to critical race theory, we merely have to take a quick look at its practitioners.

One representative “expert” is Rosa Clemente. Clemente, whose Wikipedia page describes her as a “hip-hop activist,” went on Twitter to complain about losing a lucrative contract with a government agency as a result of the President’s order:

Tomorrow I was supposed to present a keynote, Unapologetically Black: Afro-Latinx Culture and Identity to the National Credit Union Administration, a federal agency. Today less than 24 hours, due to the executive order that 45 signed 10 days ago my gig was canceled. The folks

Of course I am not the only one that this is happening too but I share so folks know that this is really happening and for gig economy workers like me a cancellation especially when you have put in hours into a presentation and turned down other opportunities is a blow.

Did she mean to say she is going to submit a bill in a “defiant” manner? Or did she just misspell “definitely?” It’s impossible to tell, because Clemente’s writing is a grammatical mess. One thing is defiantly clear: Clemente is no intellectual powerhouse.

But Clemente isn’t simply dumb. As one would expect from a person making a living pushing anti-White, anti-American hatred, she is a morally repugnant figure. Before complaining about losing her taxpayer-funded grift, Clemente’s most-recent tweets celebrated Anthony Bottom, who ambushed and murdered two police officers in 1971.

FREE THEM ALL! JALIL MUNTAQIM is coming home!!!!!! Now is the time to step up even more and free remaining political prisoners aka freedom fighters. #jalilisfree #FreeThemAll pic.twitter.com/2actk5kmc9

Bottom’s release has completely devastated the family of one of the police officers who was killed.

A man convicted in the 1971 Black Liberation Army assassination of two NYPD officers will be released on parole in October, the widow and daughter of NYPD Patrolman Joseph Piagentini told PIX11.

“I am very angry,” widow Diane Piagentini said about the decision.

Piagentini accused Bottom of being the most ruthless of the killers, who lured the two patrolmen, one Black and one White, to Harlem with a phony 911 call. Both NYPD officers were fathers.

Bottom and two other BLA members had come to New York from California specifically to assassinate police officers.

When the officers responded to the housing project, they were ambushed from behind with a fusillade of bullets.

“He (Bottom) shot him in the head and down his spine,” Diane Piagentini recalled.

Piagentini said Bottom then turned his gun on her 27-year-old husband, who had 22 bullet holes in his body when he was pronounced dead.

“He (Bottom) used Joe’s gun to complete the killing because they were running out of bullets,” Piagentini said of her husband’s death. [Pix 11]

Clemente also demanded murder charges for police in the Breonna Taylor case, where police accidentally shot and killed Taylor after her drug dealer boyfriend opened fire at them while they were serving a search warrant.

NBA players should have refused to play tonight. How are you playing basketball, with Black Lives Matter printed on the court while the police who murdered #BreonnaTaylor are free and will not be held accountable. I am sick of statements and performative outrage.

The reason people cannot tell the difference between police and white militia is because there is no difference.

In one barely coherent tweet, Clemente lashed out at ALL white people, saying they were “all guilty” for the rise of Trump:

All these white men/women are complicit with Trump.Some so worried that they went to church to pray and slept in their clothes in case 45, decided to launch a nuclear attack against North Korea? They are not heroes, they are accomplices. Now they want to say something?All guilty.

If there’s a repugnant take on race, Clemente has likely peddled it. She even was a believer in Jussie Smollett’s ludicrous race hoax:

Clemente’s Twitter is a never-ending fountain of racial hatred and bizarre neuroticism:

"Cancel culture" is the new "identity politics" argument for white folks to try and get away from the shit they have done and continue to do and when I say white folks I mean most especially white liberals and moderates.

Until the president intervened, this hateful and stupid woman was set to receive thousands of taxpayer dollars to lecture the National Credit Union Administration, a body tasked with insuring credit union deposits. Clemente has been paid enough for this worthless work that she can afford a “bomb ass lawyer” to sue taxpayers for more.

Of course I am not the only one that this is happening too but I share so folks know that this is really happening and for gig economy workers like me a cancellation especially when you have put in hours into a presentation and turned down other opportunities is a blow.

Rosa Clemente isn’t the exception. When it comes to the racial grievance grift that is infesting our colleges, our corporations, and even our military, she is the rule.

Consider this viral image that made the rounds in August:

The image isn’t from a Saturday Night Live sketch in some alternate reality where the show is still funny. It’s a real presentation at Netroots Nation in 2017. The presenter is Ashleigh Shackelford, who now goes by the name Hunter Ashleigh for some reason.

Shackelford is a ridiculous woman whose only assets are grievance, plus about two hundreds extra pounds, but critical race theory has transformed her into an “artist” and “educator” eligible to join the the most profitable grift in town.

And the grift is profitable. A recent report by The Washington Free Beacon revealed that since 2018, Loudoun County School District in the suburbs of Washington D.C. spent $422,000 on diversity training informed by critical race theory.

In neighboring Fairfax County, educators spent $20,000 for a one-hour digital “conversation” with racial radical Ibram Kendi. They then spent another $24,000 to buy hundreds of copies of his book “Anti-racist,” so they could be inflicted on students and teachers in the future.

Dumb liberals, willing to blow money on people who will teach them to hate themselves and their country, have created a vast ecosystem of people like Kendi, Clemente, and Shackelford. These people are the chief victims of President Trump’s executive order on critical race theory, and the chief reasons the order is such an excellent policy.

The zealots of the left have nothing of actual value to contribute to society. They have no useful knowledge and no valuable skills. They generate no meaningful scholarship. They are simply the modern priestly caste of our corrupt globalist ruling class. The proper purpose of a priestly class is to preserve traditions and uphold the moral order. These priests, on the other hand, destroy traditions and dissolve morality while preaching a poisonous theology of racial victimhood and anti-white hatred. Their purpose is to preach a false religion of division, discord, and self-hatred — all the better to keep the country weak and under the steel boot of the globalist ruling class.

Because these people have nothing of value to contribute, they can only survive by obtaining political power and leeching off the public. And that is exactly what they have done. They have seeped into our nation’s once-great universities. They infest human resources departments and government contractors, exploiting bureaucratic rule-making and the public’s fear of lawsuits to get sinecures and contracts for themselves. Like barnacles on a whale, they survive only because the public supports them. And that is why conservatives everywhere must copy the President. State governors should imitate him by banishing all critical race insanity from their administrations. State legislators should ban its use in any state-funded universities or school districts. In fact, they should go further, and abolish the very departments that spawn these theories at any schools subject to their reach. Every woke priestess stripped of her livelihood is one less person pouring poison into the heart of the American body politic. 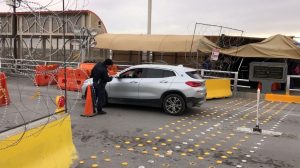 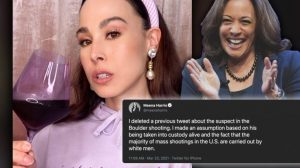