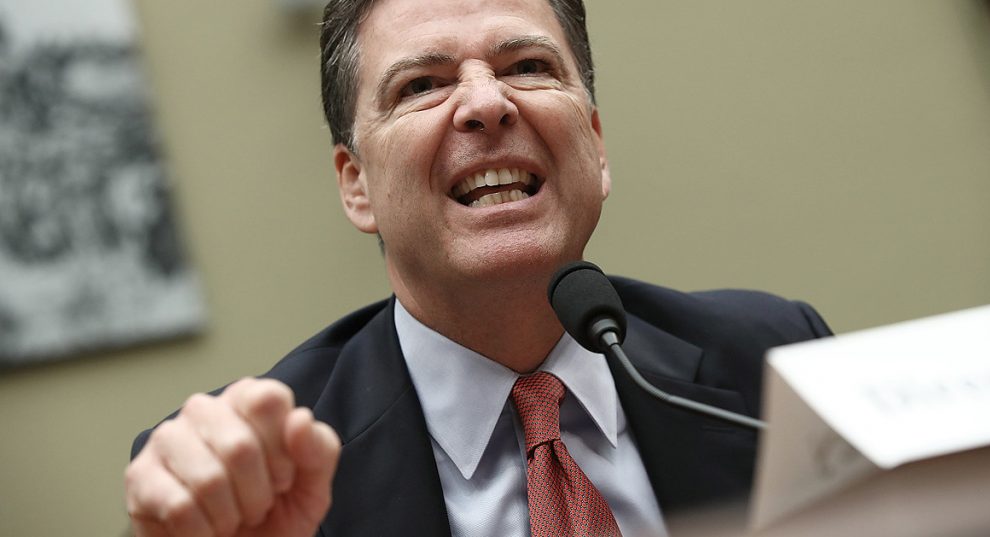 A late day submission to DC Circuit Court in a FOIA case previously discussed, reveals the content of Mueller’s probe & use of multiple, previously unknown, James Comey memos. Additionally, within the filing we discover how Comey documented multiple events, meetings and information surrounding the FBI investigation of Donald Trump.

The documents surface as part of the FOIA case [Backstory Here] where DC Court Judge James E. Boasberg -an Obama appointee and also a FISA judge- asked the FBI to file an opinion about the release of Comey memos to the public.  There are two issues: (1) can the memos be released? and (2) can prior sealed FBI filings, arguing to keep the memos hidden, be released?

In a very revealing filing last night (full pdf below) the lead FBI investigator for the Mueller special counsel, David W. Archey, informs the court that with the ending of the special counsel some of the memo material can be released, such as their existence; however, Archey also states much of the memo content and sealed background material from the FBI must continue to remain sealed and redacted.

The FBI will file a further declaration on or before April 15, 2019, to explain why the remaining redactions to the Third Archey Declaration continue to be necessary. (page 2)

Within the filing we discover the lead FBI agent was David W. Archey (background here). Archey was selected by Robert Mueller when the special counsel took over the counterintelligence investigation from Special Agent Peter Strzok. According to ABC: “Agent David Archey is described by colleagues as a utility man of sorts within the FBI”. However, until now his exact role was not known.

Following the conclusion of the Mueller probe, David Archey was moved.  Effective March 8, 2019, Archey became head of the Richmond, VA, FBI field office. (link) Due to the corrupt nature of the special counsel, this is somewhat concerning. I digress…

The first three pages of the filing consist of David Archey explaining to the court that some of the material can be released, but other material must be withheld.  He then goes on to reference two prior sealed attachments outlined as “Exhibit A” and “Exhibit B”.

“Exhibit A” is a filing from the FBI on January 31st, 2018, essentially supporting an earlier “in camera ex parte declaration” requesting continuance of a prior court order to keep the background material sealed from public view.  In essence, the FBI didn’t want the public to know what was/is contained within the Comey memos (including the scale thereof).

“Exhibit B” is where the action is.

This is the original declaration outlining to the court on October 13th, 2017, why the Comey memos must be sealed.  It is inside this exhibit where we discover there are many more memos than previously understood, and the content of those memos is far more exhaustive because James Comey documented the FBI investigation.

In essence Comey created these memos to cover his ass. (pg 13):

FBI Agent Archey then goes on to explain what is inside the memos: It is in this section where we discover that Comey made notes of his meetings and conversations with investigators.

The content of the memos seems rather exhaustive; it appears Comey is keeping a diary for use in the event this operation went sideways. (page #14, exhibit B)

All of those investigative elements would likely be contained in official FBI files and notes by the investigative agents.  There is no need for a contemporaneous personal account of meeting content unless Comey was constructing memos for his own protection. These memos appear to be motivated by the same mindset that caused Susan Rice to generate her email to self on inauguration day.

In the next section FBI Agent David Archey explains the scale of the memos.  There are obviously far more than previously discussed or disclosed publicly.  Additionally, look carefully at the way the second part is worded.

Archey is saying Comey’s written recollections should be withheld because it might affect the testimony of people familiar with the “memorialized conversations”. (page #15, Exhibit B)

This is an October 2017 filing, Comey was fired May 9th.  FBI Agent Archey is outlining Trump as the target who might adjust his testimony.  Again, more evidence of the special counsel focus being motivated by the obstruction case they were hoping to build. [Reminder, Comey was still FBI director at the time these memos were written]

The next section gets to the heart of why the FBI wants to keep the Comey memos hidden and not released.

In this section Archey outlines how FBI Director James Comey wrote down who the sources were; what code-names were assigned; how those confidential sources engaged with FISA coverage initiated by the FBI; what foreign governments were assisting with their effort; and what the plans were for the investigation.

Again, why memorialize all of this classified information unless the memos were intended as CYA protection for himself?

There’s also really good news in here.  Think about it.  Now we know the entire anti-Trump operation is memorialized in writing.  There is documentary evidence of the entire operation within these memos.  We did not know that before this moment.

Therefore, it looks like President Trump can add the Comey Memos to the pre-existing declassification list.  At any time, President Trump now has a set of documents he knows to exist that his office can ask to be released.  The investigation is over.

If the FBI was running an honest and genuine investigation; what do they have to fear from the release of the Comey Memos now that the investigation is over.