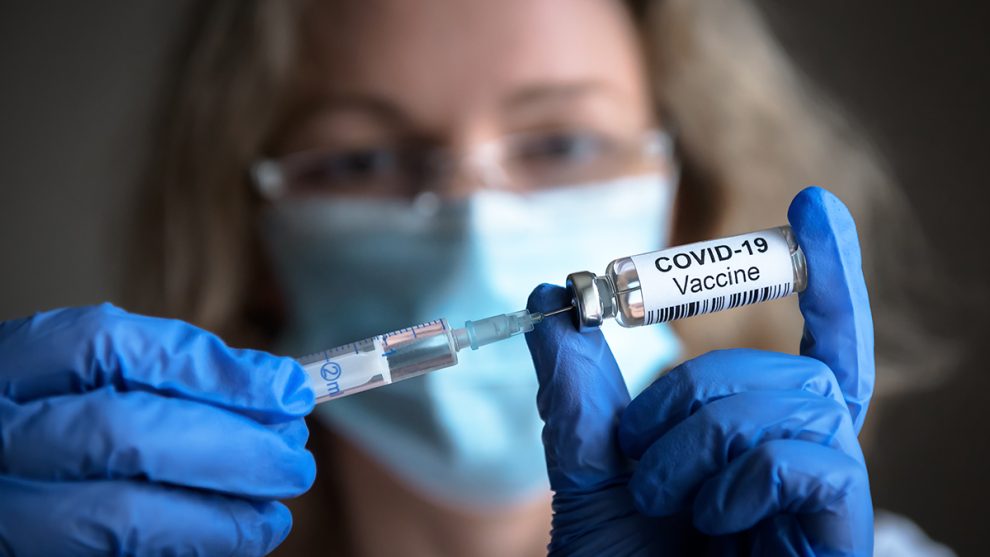 Recently even The Washington Post had to admit analysis of CDC data showed the majority of patients dying with or of COVID now are vaccinated. Once the paper announced this fact, it provided a reason and some advice: Vaccine efficacy wanes over time; therefore, get your boosters. Unfortunately, new studies offer evidence that additional boosters may not be the solution.

First, the Cleveland Clinic published a preprint of a retrospective analysis of over 50,000 Cleveland Clinic Health System employees and their experience with COVID following the Omicron booster. (Emphasis added.)

With a total of 51,011 Cleveland Clinic Health System employees, 20689 (41%) had a previous documented episode of COVID-19, and 42,064 (83%) received at least two doses of a COVID-19 vaccine. COVID-19 occurred in 2452 (5%) during the study. In a bombshell finding (but not surprising given growing data), the risk of COVID-19 increased with time since the most recent prior COVID-19 episode, and importantly, with the number of vaccine doses previously received.

The authors noted, “Despite [not receiving vaccines], their risk of acquiring COVID-19 was lower than those who received a larger number of prior vaccine doses.” One chart shows this phenomenon for the duration of the study. The black line is cumulative cases for individuals who received no vaccine doses. The blue line represents those subjects who received three doses, and the pink is more than three. 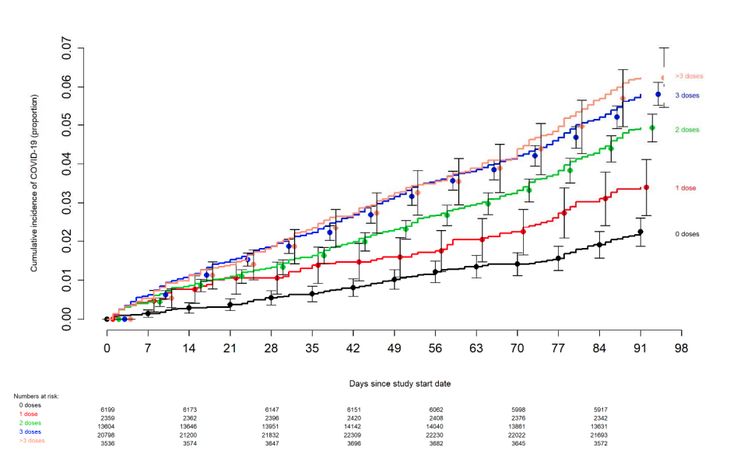 Now, two other studies offer explanations for why the trends noted by The Washington Post and the Cleveland Clinic study are emerging. Knowing a few details about our immune systems helps to understand the significance of these studies. There are two broad categories of immune responses to invaders like viruses in our bodies. They are called humoral immunity and cell-mediated immunity. Each one plays a role in fighting pathogens in the body.

Humoral immunity includes the B cells, which pump out antibodies to fight the foreign organisms they encounter. These cells “remember” the invaders they specialize in fighting and produce specific antibodies when you run into the same pathogen again. Research has repeatedly shown an individual develops memory B cells following a COVID infection, which helps explain the role of natural immunity in fighting the virus.

Cell-mediated immunity is activated when T-cells arrive on the scene. So-called “helper” CD4+ T cells release cytokines when they encounter an infected cell. These signaling proteins summon “killer” CD8+ T cells and macrophages. These cells flock to the diseased cells and destroy them. T-cells are not specialized like B-cells. They seek and destroy all infected cells, not just ones they recognize from previous encounters.

Several new studies raise questions about how repeated mRNA vaccines affect both of these crucial immune functions. A peer-reviewed study by German researchers shows that mRNA boosters affect the class of antibodies that are produced. It found an mRNA vaccine-induced IgG4 antibody response appearing late after repeated immunization.

According to a separate article on PubMed, “IgG4 is a promiscuous antibody, which could be directly pathogenic [disease causing], fulfill a protective role, or could just be a fortuitous marker of an aberrant inflammatory response.” In other words, this antibody class is implicated in autoimmune disorders, like autoimmune pancreatitis, and can inhibit the clearance of cancerous cells in some tumors.

According to the German study, very little is known about IgG4’s role in viral infections. After repeated exposures to the respiratory syncytial virus (RSV), IgG4 is not significantly increased. The study also notes that even chronic illnesses like human cytomegalovirus do not trigger significant specific IgG4 antibodies. However, vaccine developers have documented increases in IgG4 in trials for two different HIV vaccine candidates.

Most of the studies of people who suffered from a COVID infection showed that other antibody classes, not IgG4, were dominant in the response. However, in two studies cited by the authors, high levels of IgG4 antibodies during a COVID infection were associated with severe illness and poor outcomes.

The German researchers noted that the macrophages and T-cells that clean up damaged cells and engulf infected ones were reduced after the third booster. Higher proportions of IgG4 antibodies accompanied this lower level of activity. Their findings include evidence that a subsequent COVID infection worsens the shift toward IgG4 production. In some individuals, it becomes the dominant anti-spike antibody class.

They recommended further research to clarify the precise immunological mechanisms driving this response and to evaluate whether an IgG4-driven antibody response affects subsequent viral infections and booster vaccinations. They asserted that this information is required to make further COVID vaccine recommendations and develop new mRNA vaccines. They did not mention the potential link to vaccine side effects that present as new-onset autoimmune disorders.

In another preprint study, Chinese researchers found that multiple boosters lowered antibody production and caused a profound diminishing of CD4+ and CD8+ T cell activation in mice. These findings raise concerns about the strength of the immune response after repeated vaccines. It could be a sign of the immune system fatigue that several researchers proposed in the face of repeated injections.

As support for their findings, the mouse researchers pointed to a published paper that analyzed immune responses in 38 human subjects. That study found the third mRNA dose suppresses antibody production. The 4th dose compounded the problem.

These findings may explain why highly vaccinated countries are seeing repeated waves of COVID that have not settled into a seasonal pattern like other coronaviruses. They certainly cannot be ignored, given what is known about IgG4 antibodies, the potential link to autoimmune disorders, and their effects on the immune system.

The CDC currently recommends everyone six months and older receive a complete mRNA series and the Omicron booster. No modifications have been made based on new findings.