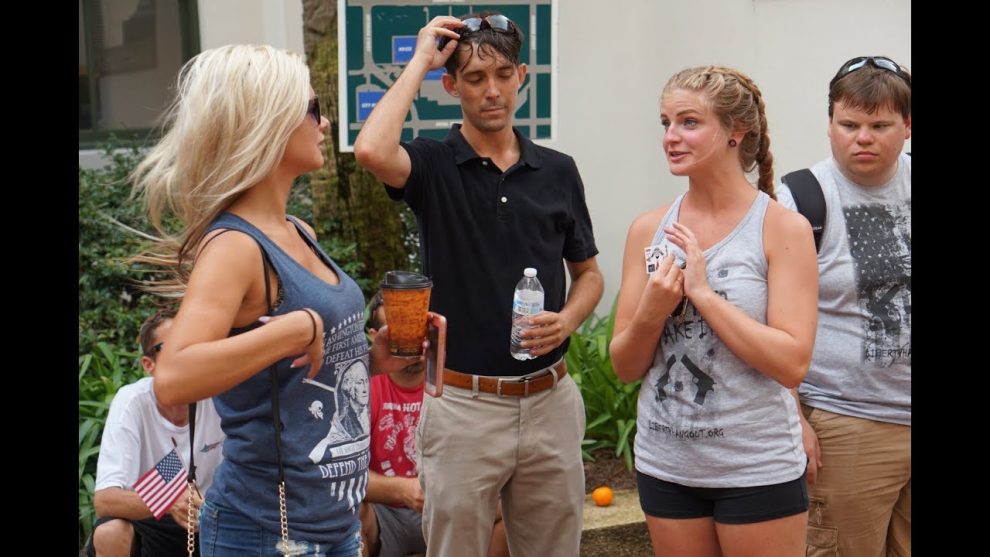 A conservative journalist was ejected from a Bernie Sanders campaign event Sunday afternoon, apparently for no good reason.

Kaitlin Bennett (also known as “Kent State Gun Girl”) is the grassroots director of Liberty Hangout and has written for Infowars. Bennett was sitting in the audience with her fiancé Justin and her security guard Curtis at the “Ohio Workers Town Hall Meeting” in Lordstown, Ohio, waiting for the event to begin, when a Sanders campaign official approached her and told her to leave.

When Bennett asked why she couldn’t stay and watch, the official said that it was “invite only.”

“No, it’s public,” Bennett responded. “On his website it says public.”

The event has been taken off the Sanders’ “Hear the Bern” Facebook page, but prior to the event, Fox 8 Cleveland reported that it was free and open to the public. Entrance to the town hall was provided on a first come, first served basis, according to Fox 8.

“This is an event that we paid for. This is an event — we bought this space,” the campaign official explained when Bennett protested. “I’m going to ask you one more time,” he said, before threatening to turn the matter over to security.

“Can someone tell me what I did?” Bennett asked as she was being escorted out of the building. “I need to know what rules I violated.”

A security guard told her that it was a private event, therefore, it’s considered private property.

Bennett and her fiance informed him that the town hall was publicized as a public event.

“This is what I’ve been told by the campaign staff,” he said. “I am following their orders,”

“So you work for the campaign staff?” Bennett asked the security guard.

“We’re contracted through them,” he explained. “I’m just doing what they’ve asked me to do. I have no control over this. They asked me,  they said that they would like you to leave for the day.”

Bennett and her fiancé asked why they were being ejected, but the security guard didn’t have an answer.

“We are facilitating that because we are contracted by them. I’ll have to ask you to please keep walking and keep this as nice as possible,” he said.

The police officer agreed with me that I did nothing wrong, but booted me anyway. On my way out, the private security officer told me he supports me but has to do his job. Thank you @BernieSanders for exposing how intolerant the left really is towards dissenting opinions. pic.twitter.com/lzFX1s8gjP

An officer outside told Bennett that the security guards were actually police officers who were contracted through the event, “so they have to follow the rules and regulations that the staff provides.”

He added: “They’re still marked police officers with badges, but they’re working with the event so they have to follow the rules that people set forth. More than likely, he did not want to do that, but he had to because he’s contracting through the event.”

“So what we just saw was Bernie Sanders’ campaign discriminated against a certain journalist. Those people recognized me,” she said. “I am a woman journalist and I got ejected from a Bernie Sanders town hall event. I’m not allowed to report on it, I’m not even allowed to listen to Bernie.”

Bennett pointed out that Sanders’ supporters would like her to change her mind about President Trump and support their preferred candidate. “But I can’t even listen to what Bernie has to say!” she exclaimed.

Bennett also found it interesting that the so-called “private event” was being held at a public high school.

“There’s a socialist inside who supports nothing along the lines of private property, but he’s going to use it to his advantage to keep people that he doesn’t like from asking him some hard questions,” she noted.