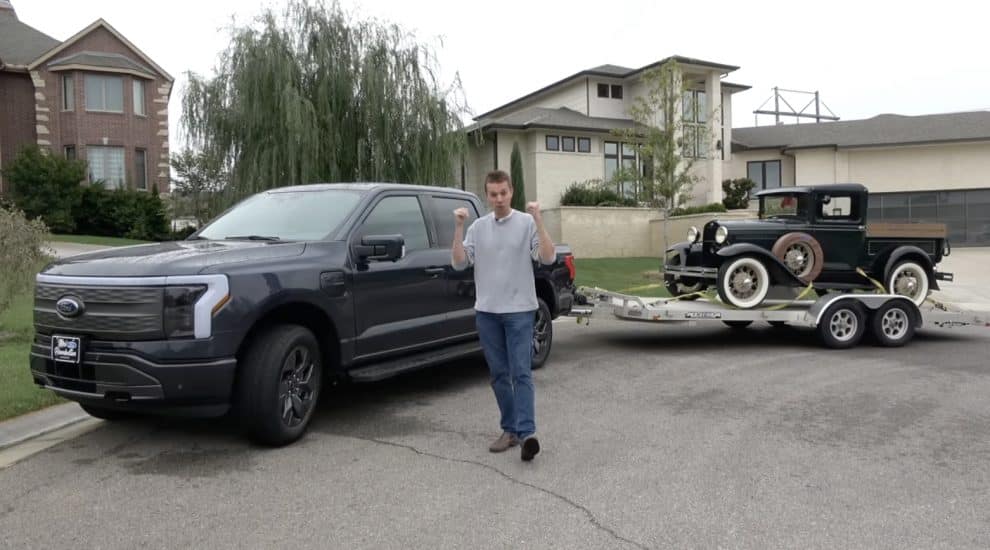 A YouTuber with 1.4 million followers attempted to tow a 1930 Ford Model A truck with his brand new 2023 Ford F-150 Lightning electric pickup truck, but it ended in “a complete and total disaster.” “If a truck towing 3,500 pounds can’t even go 100 miles — that is ridiculously stupid,” Tyler “Hoovie” Hoover says in his video. “This truck can’t do normal truck things. You would be stopping every hour to recharge, which would take about 45 minutes a pop, and that is absolutely not practical.”

“This is my new 2023 Ford F-150 Lightning electric pickup truck,” YouTuber Tyler “Hoovie” Hoover said in a video in which he tests the electric truck’s towing capabilities, which resulted in “a complete and total disaster.”

For his experiment, Hoover planned to simply drive the EV truck with an empty trailer in tow only 32 miles away, and then load up a 1930 Ford Model A pickup truck he recently bought, so that he could tow it back the same way he came.

“I had this thing charged to just over 200 miles when I started my day, so ample margin for error when it comes to range and towing and also considering the fact that the trailer was going up empty two times,” Hoover added.

After attaching the empty aluminum trailer to his truck and “pulling out my neighborhood,” which was just about a quarter of a mile away, the EV had already lost three miles of range. By the time Hoover got to his location 32 miles away, the vehicle had lost a staggering 68 miles of range.

Once he loaded up the Model A truck andd drove it back to his neighborhood, Hoover “got the driving range low warning,” and saw that he only had 50 miles of range left, despite charging the EV for 200 miles at the start of his 64-mile round trip.

“Are you kidding me? That’s almost 90 miles of range in 30 miles. Are you serious? That’s nuts. What a joke,” Hoover reacted.

“So, yeah, that was abysmally bad, and if the future is electric, there has to be some kind of solution for this,” he said. “I have no idea why EVs tow so bad. My guess would be it doesn’t have a normal transmission where there’s gears and a car’s in a lower rev range.”

“If a truck towing 3,500 pounds can’t even go 100 miles — that is ridiculously stupid,” Hoover continued. “This truck can’t do normal truck things. You would be stopping every hour to recharge, which would take about 45 minutes a pop, and that is absolutely not practical.”

Hoover concluded by saying, “The F-150 Lightning is more like a truck that most people use their trucks for, just to get around A to B, and not really using it to do truck things.”

“They just want something big and comfortable, and it does great at that, but as far as doing truck things, well so far just with towing, not good,” he said.