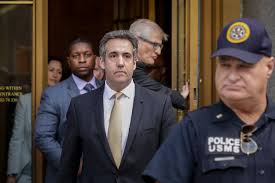 Appearing on Wednesday before the House Oversight Committee, Mr. Cohen also will make public some of Mr. Trump’s private financial statements and allege that Mr. Trump at times inflated or deflated his net worth for business and personal purposes, including avoiding paying property taxes, the person said. The financial statements were developed by Mr. Trump’s accountant, the person said. The Wall Street Journal hasn’t seen those statements.

Mr. Cohen’s testimony is expected to focus on his “behind-the-scenes” accounts of working for Mr. Trump for over a decade, a period during which Mr. Cohen will say he witnessed “lies, racism and cheating” by Mr. Trump, the person said.